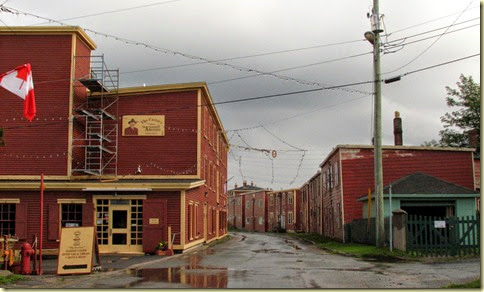 For years the salt cod industry was managed similarly to isolated mining communities where the miners were dependent on the company store and the whims of the miner owner. Little money exchanged hands and the workers were often in debt. In the small cod fishing communities fish merchants were the middlemen, exchanging fishing supplies and household necessities for dried salted cod fish, and setting the price that the fishermen received for their fish. William Coaker, who was born in St. Johns, Newfoundland, saw this practice in person when he worked as  an agent for a fish merchant. In 1908 he helped found the Fishermen's Protective Union which grew to 21,000 members and united the rural fishermen. Cash was paid for the fish and stores were established where goods could be purchased at non-inflated prices.

William Croaker founded the town of Port Union as a base for the FPU and built The Factory to house equipment for publishing his newspaper, "The Fishermen’s Advocate."  All of the equipment which was used from 1910 to 1980 is still in place. The top floor of The Factory was a wood working shop and has the original equipment.  Photographs, artifacts and the counter from a FPU store are also on display. Viewing is by guided tour.

The museum is accessible. The threshold at the entrance is a bit high. A few steps lead down to the newspaper printing area but it can be viewed from the main floor.