When Sioux Falls was offered over 100 mounted animals, the collection of big game hunter and local businessman, Henry Brockhouse, they decided to join the collection with the zoo. So now visitors have the bizarre experience of viewing the dead animals in the museum and then their very much alive counterparts in the zoo! Actually both the museum and the zoo are done well. The mounted animals are displayed in life like poses with informative signs. The zoo has a lot of acreage so most of the animal enclosures are very roomy. An expansion is planned for the African Savannah.

The museum is completely accessible. The zoo is accessible but some of the enclosures have fencing that blocks the view for children and people in wheelchairs. The giraffe section is especially bad with very high fencing. The walkways are wide, flat, and in good condition except for the very first section which is patterned concrete and very bumpy. 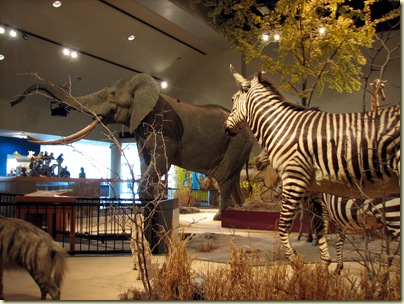 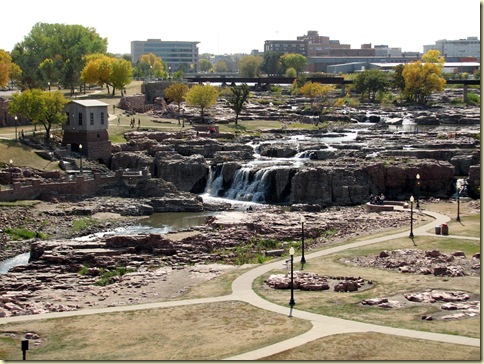 The drought over the summer has parched the grass and decreased the water flow but Falls Park is still a nice place to spend an afternoon. The visitor center, which is mostly just a gift shop, has a tower with a viewing platform. Paved paths on both sides of the river wander through the park. Informative signs are located along the paths.

The paths are wide and smooth, very easy to roll along, but hilly so most wheelchair users will need to have some help. The signs along the paths are at a good level and easy to read. Railings along the paths block the view at places.The tower has an elevator. The doors to the outside viewing balcony are a little heavy.

RV parking is located across Falls Park Drive at the farmer’s market lot. RVs are not permitted on the park road. Use caution planning your route. North Phillips Ave., southwest of the park, has a railroad bridge underpass with a 12’ height limit. Park
43.56009, -96.72278 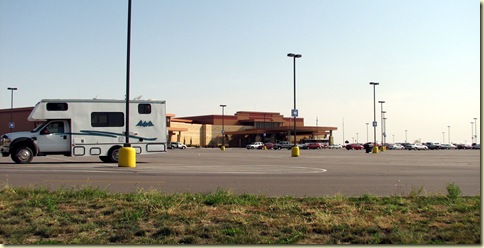 The casino lot is huge so just find a spot out of the way. There’s also a small RV park, full hookups and pull throughs, for $20.00 a night.

This is a new casino, very roomy with good ventilation. The chairs are easy to move out of the way and the ticket and money slots are easy to reach. We thought that the machines were set tight so we didn’t play long. Casino
43.49891, -96.50589

Grotto of the Redemption

This is amazing! Father Paul Dobberstein, along with Matt
Szerensce  and Father Louis Greving, built the grotto using petrified wood, malachite, azurite, agates, geodes, jasper, quartz, topaz, calcite, stalactites and stalagmites all carefully cemented into place. Every surface is decorated with stones and crystals. A small museum has displays and a movie about building the grotto. Guided tours are available.

The grotto is accessible. It’s built in levels with ramps to all of the levels except the very top one. The museum and the movie are also accessible. 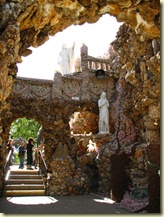 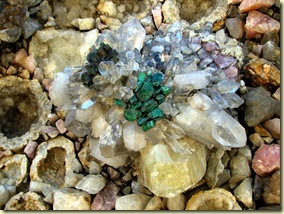 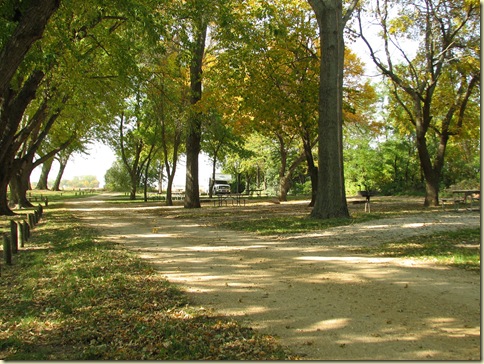 Douma Park is a little oasis of trees and water surrounded by corn fields. The ponds, which look like they may be gravel pits leftover from road building, are used for swimming, fishing, and electric boating. The campsites are fairly close together with many large shade trees but no other vegetation for privacy. Amenities include electric hookups, pit toilets and water. The water is polluted with nitrates and not recommended for children, pregnant women or nursing mothers. (or us-yuck)

None of the sites are accessible but the ground is hard enough to making rolling around pretty easy although some spots have large, loose gravel. The tables have short overhangs. The pit toilets and the pay station($10.00) are not accessible. 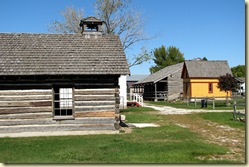 Fort Dodge was established to protect the early settlers from the local Indian tribes. The danger was mostly in the minds of the settlers so a fort was never built and the post was only manned for three years. Even so an accurate representation of a frontier fort has been built on the grounds. An additional dozen buildings, some relocated, some newly built, are opened to tour. Several have small museums with displays about the fort and the history of the city.

The main reason that we visited was to see the “real” Cardiff giant. The Cardiff Giant was a major hoax of the 1800s. A block of Fort Dodge gypsum was shipped to Chicago where it was carved into a 10’ man. The sculpture was buried on a New York farm, discovered while digging a well, then displayed as a petrified man. The exhibit generated thousands of dollars as people flocked to see it. The fake giant is still in New York but this one in Fort Dodge is a real one. ;- )

Although attempts have been made to make the fort and other buildings accessible it is almost impossible to see most of it without help. Even with help getting around is very hard. Most of the buildings have ramps but they weren't built with the ends flush with the ground so many have pieces added on that are steep. Most of the buildings have high thresholds. The paths are loose, deep gravel or lumpy, grassy ground. 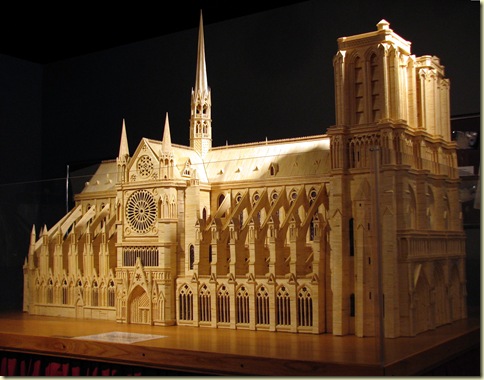 What do you do during long, cold winters in rural Iowa? If you’re Patrick Acton you get a pile of matchsticks and a bottle of glue and make intricate models. At least twelve of the over sixty models that he’s built are on display at the museum. He’s always working on another plus some have been sold so the display is ever changing. 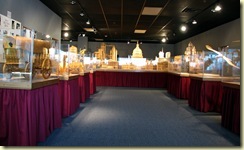 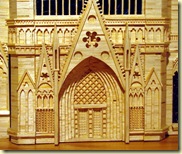 The campground has three terraced levels so all the sites have a lake view. Amenities include restrooms with showers, electric hookups, and a dump station.There’s also swimming and boating in the small lake.

None of the sites are accessible but most are usable. The ground is hard packed dirt and crushed rock so rolling isn’t too difficult. The tables don’t have an overhang. The restrooms themselves may be accessible but the building is located up a steep slope. 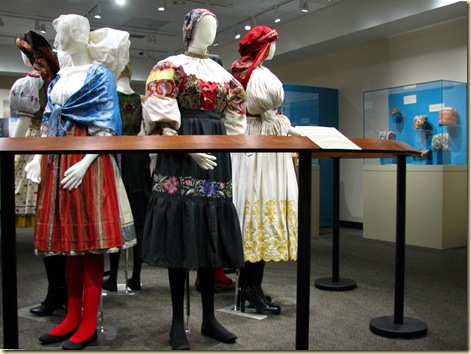 2008 started with heavy snow fall then an excess of rain fell in the spring. By early summer the soil was so saturated that June rainstorms caused record flooding. The Cedar River rose 19 feet above flood stage,
breached the levees and wiped out much of the low laying parts of Cedar Rapids. The Czech & Slovak Museum building and exhibits suffered a lot of damage. The main exhibit details the processes used to clean and restore many of the elaborately embroidered traditional outfits. The museum was moved and raised on a foundation that put it above flood level. A short movie is shown about how this large building was moved.

Everything is accessible however because the building was raised there’s a very long, ADA compliant ramp to the entrance. 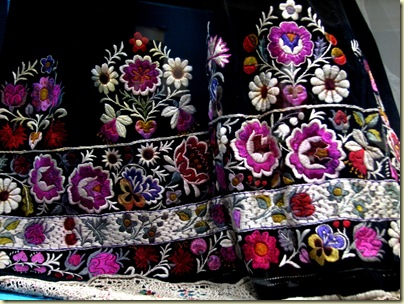 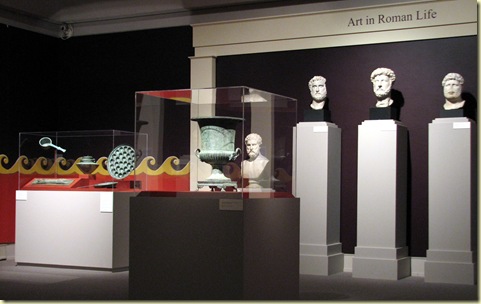 This is a fairly small museum with galleries split about half and half between permanent collections and temporary exhibits. 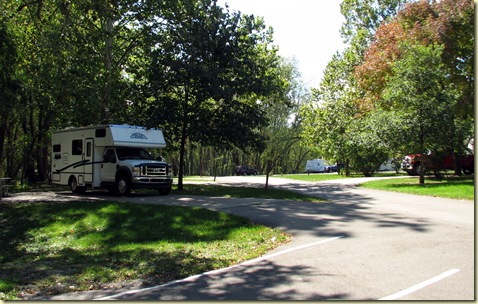 This is one of five Corp of Engineer campgrounds located near the Coralville Lake dam. About half of the spaces in this small campground are right along the river. They’re fairly close together with no vegetation for privacy. There isn’t a pay station so campers must drive over the dam road to the West Overlook campground to pay. The dump station for all of the campgrounds is also located there

None of the spaces are specifically marked as accessible. Most have a paved parking pad and gravel under the picnic table. Some of the tables have a long overhang on one end. 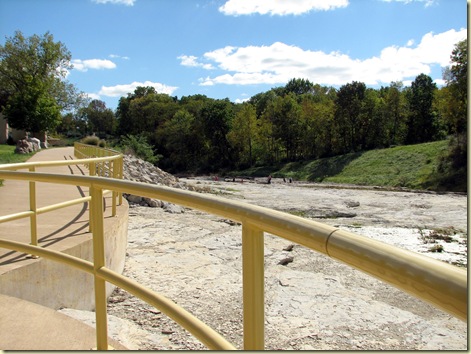 In 1993 and again in 2008 high water in Coralville Lake rushed over the spillway and scoured the land down to bare rock, in the process uncovering 375 million year old fossils of coral and seashells. A walkway with interpretive panels overlooks the fossil rock. Steps lead down so that visitors can get a closer look.

Stop at the Coralville Lake visitor center for more information about the fossils. A movie about the floods is shown in a small theater.

The walkway is accessible but the gorge isn’t. An eye level outcropping of rock with some good embedded fossils is located along the northern end of the walkway.The visitor center and the theater are accessible.

Vans and small RVs will fit in the parking area at the gorge but larger RVs will have to be parked across the spaces. The visitor center, located at the end of a uphill drive, does not have parking or turn around room for large RVs. Parking is available at the bottom of the hill next to a long flight of steps.  Gorge
41.72157, -91.5319 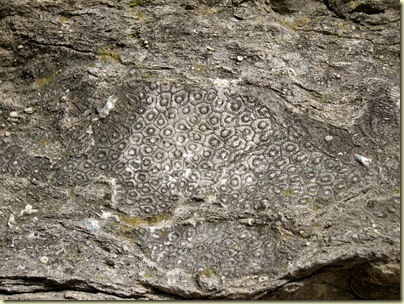 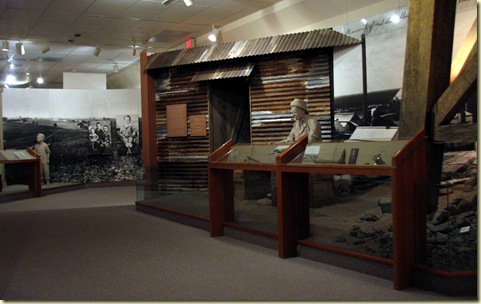 While the library and museum are inside the Herbert Hoover NHS they are not under the same administration so there’s an admission fee which is why I’m posting them separately. The museum covers Hoover’s childhood, his career as a mining engineer, the years that he served as Secretary of Commerce and how it all affected the decisions that he made as President after the stock market crash of 1929 which led to the Great Depression.

The museum is accessible but some of the exhibit cases are located too high for a good view from a wheelchair.

RV parking is located across from the Herbert Hoover NHS visitor center. The walk/roll to the library is fairly short with good sidewalks and curb cuts. Car parking and a drop off point are located at the library.  Library
41.66873, -91.34841 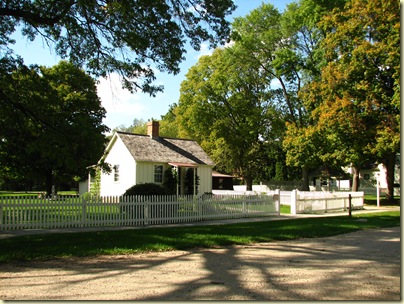 Herbert Hoover was born in this tiny two room cottage and lived on the edge of the small town of West Branch until he was ten years old. Tragically both his father and mother died young and he was sent to live in Oregon with his uncle. Stop at the visitor center and watch a short movie about his childhood. A walking tour around the grounds includes numerous restored buildings. Four are opened to the public – the cottage, blacksmith shop, schoolhouse, and meetinghouse.

The visitor center is accessible.The sidewalks and boardwalks are all in good condition.The buildings have ramps to the entrances but the cottage has a step up at the doorway. It’s possible peek inside and get a look at the living room. 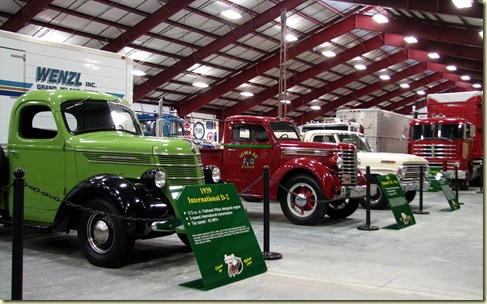 The trucking museum is located right off of I-80 behind the Iowa 80 truck stop (the largest truck stop in the world!). The collection is very good with many unusual and rare trucks.

The parking lot is large enough for RVs. Additional parking is available at the truck stop. A sidewalk leads to the museum. Museum
41.62055, -90.78149 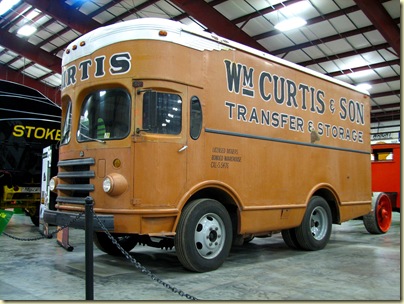 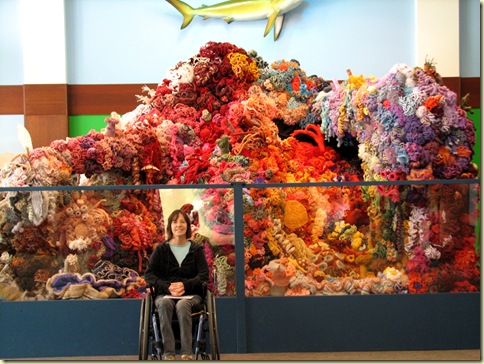 The picture does not do justice to this fantastic piece of art. It’s a coral reef composed of 4000 individually crocheted pieces. It was originally displayed in the Smithsonian in Washington DC. 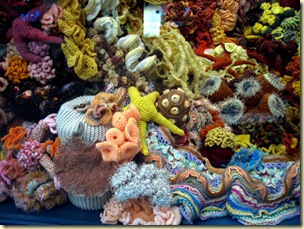 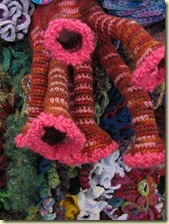 The museum also has natural history galleries, a local history gallery, and two small galleries with Asian and Egyptian artifacts. This isn’t strictly a children’s museum but there are a lot of fun hands on exhibits for kids. The layout of the museum is a little confusing so make sure that you don’t miss anything.

Everything is accessible. A single elevator does not access all of the levels so the lower level is easy to miss. 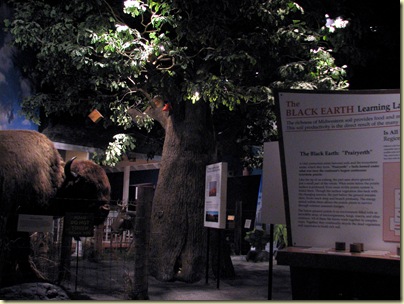 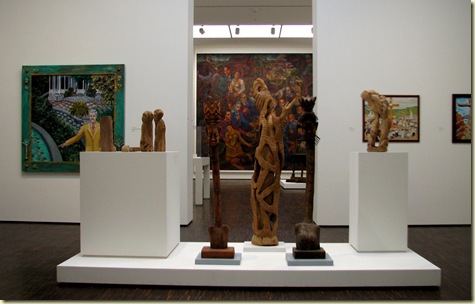 Vans and small RVs will fit in the lot at the front entrance. Larger RVs can be parked along the street or behind the visitor center in Centennial Park. Museum
41.52, -90.57623 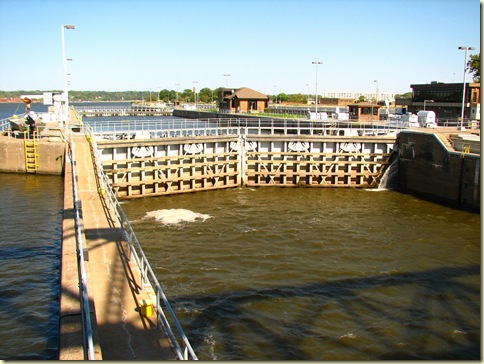 Twenty-nine locks and dams control the water level and allow commercial vessels to navigate through the upper Mississippi River. Visitors who are lucky enough to catch the locks in action can watch barges being raised or lowered  as they are floated past the dam. A very small visitor center has explanations of how it all works. There’s also a short movie about the Mississippi.

The visitor center is located on Rock Island Arsenal which is an active Army base so you’ll be passing through the base gate. Visitors over 16 must have a photo ID and your vehicle may be inspected. 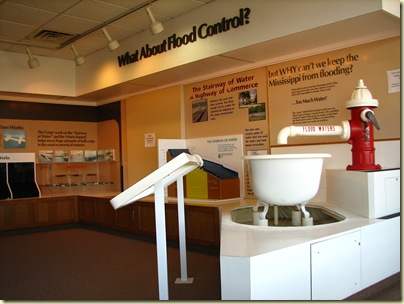