If you like old machinery and equipment don’t miss this place! In 1945 Alfred ‘Cap’ and Andrew Collier, brothers and third generation Oregonians, donated the land and a collection of antique logging equipment to the state to form the nucleus of the museum. Early horse drawn high wheels, narrow gauge steam locomotives, 1940s logging trucks, road graders, and a huge steam plant that powered a sawmill are just a few of the things found on the museum grounds. Old homestead and logging camp buildings have been relocated to form a small village. They are not open to tour but each has an interpretive sign. A small gift shop has a few exhibits but the main attractions are all outside. 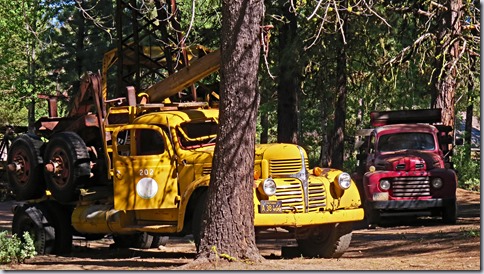 The trails are a combination of new concrete, hard packed crushed stone, and loose dirt. Wheelchair users will need to have assistance to see the entire museum. The easiest path on the unpaved section is down the hill through the village, around past the equipment and back uphill to the visitor center. 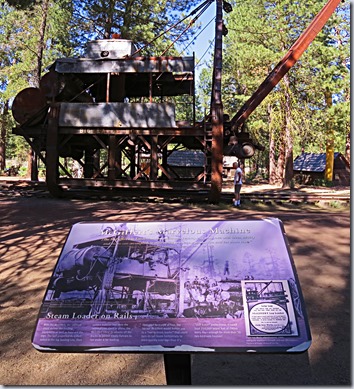 RV parking is on the left after you turn into the casino entrance road. A busy gas station and truck stop are on the right. Most of the trucks park in the truck stop so the left lot has room for many RVs. Nine spaces are extra long but it’s okay to park anywhere under the trees or in the gravel section at the far left.

We made a left turn off of Route 139 onto FR 97 to access the southern entrance into Lava Beds National Monument and stopped in the forest for the night before going into the park. We found a quiet and pretty boondocking spot with widely spaced pines and an undergrowth of sagebrush. It’s just a few miles from the paved road but appears to get little use. We didn’t see any previously used spots so we just pulled off into a clearing.  There are places large enough for any RV but you’ll have to make your own campsite plus there aren’t any established turn-around spots. It gets so little use that no one even drove down the road while we were camped.

Over 700 caves are located in the monument. They formed when streams of hot lava began to cool. The outside hardened while the center continued to flow. As the hot lava drained out a tube was created. About two dozen of the caves have been developed to make them easier for visitors to explore. A permit is required. 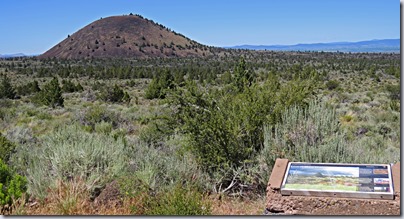 The monument and the little agricultural town of Tulelake are on the homeland of the Modoc tribe who were forced to move to the Klamath reservation in the 1860s. Some of the Modocs left the reservation in the 1870s and hid in the lava beds which became known as Captain Jack’s Stronghold after the Modoc leader, Kientpoos, called Captain Jack by the settlers. After six months of fighting the last of the resisters were captured and sent to Oklahoma.

None of the caves or trails are accessible so this is a drive through park for people with mobility issues. The visitor center, which has a short film and exhibits about the lava formations and the Modocs, is accessible. 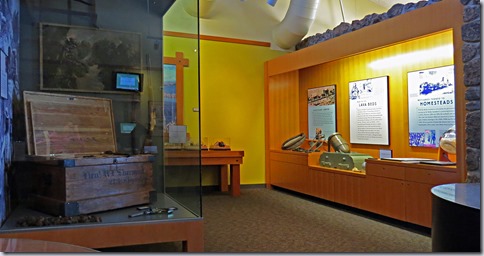 Eagle Lake is the second largest natural lake in California. It doesn’t have an outlet although some water escapes through a tunnel which was dug in 1923 as part of a failed irrigation project. The lake is formed by three basins with different levels of water  The southern basin is the deepest. The land around this basin is part of Modoc National Forest and has four family campgrounds and one group campground, all close to the shoreline.  A 5 mile, paved bike/hike trail connects the campgrounds. The land around the northern basin is BLM land except for some ranches and a few vacation communities.

We camped in Rocky Point  East, a BLM dispersed camping area, at the northern basin. The lake has receded a lot and a gravel area, which was the parking lot for a boat ramp, now serves as a very good boondocking site. The road in is about 1.6 miles long. It’s one lane, dirt, and a bit bumpy. The worse part travels over a section of flat rocks but any RV should be able to navigate the road.  At the end are a pristine view and a very quiet place to camp.

We drove south to the Christie Day Use Area and walked/rolled along the trail which follows the shore and is shaded by tall evergreens. The trail is fairly level except for the spur from the parking lot. RVs will fit in the lot. 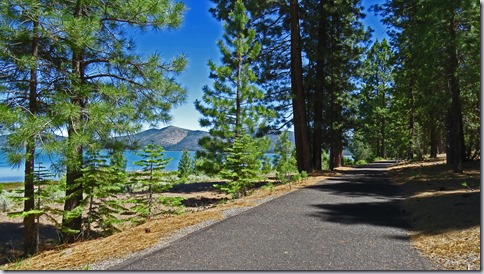 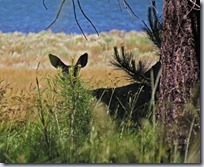 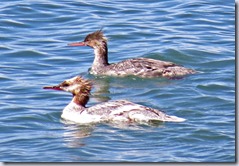 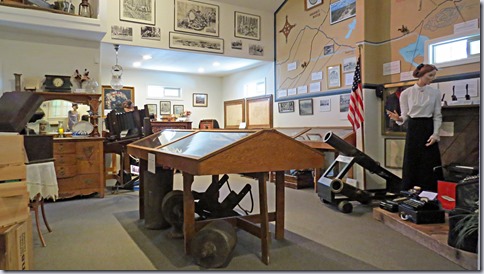 This is a tiny museum with good displays about the local history of the area.  A major industry in Susanville from 1921 - 1954 was the manufacture of wooden boxes used to package and ship fruit grown in southern California.  A log building known as Roop’s Fort is located on the grounds. It was built in 1854 by Isaac Roop, an early settler, as a trading post for westbound migrants. 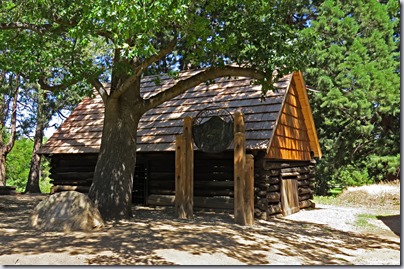 The museum is accessible. The fort can’t be entered but you can peek in the door.
The parking in front of the museum is too short for RVs but parking is available on the opposite side of the street. A small and slanted lot makes this casino unsuitable for most RVs. We parked nose towards the street close to the smoke shop and managed to get level enough.

The casino is accessible. The doors are not automatic but  employees are watching and will hold them opened. 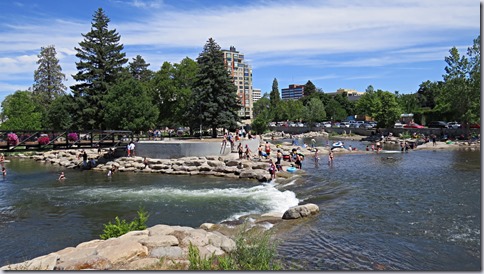 The Truckee River runs right through downtown Reno. It’s not very wide or deep so swimming, tubing, kayaking and fishing are popular sports. A level, partly shaded, paved path follows the river.  I can’t find any good information on the path so I don’t know it’s length or the start and end points. 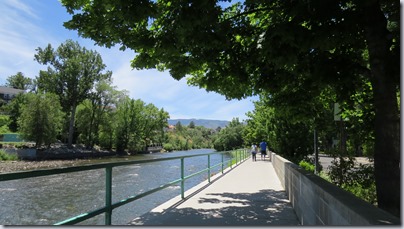 We parked on Mill Street near the National Automobile Museum. There is an access point at the end of Museum Dr. We walked/roll west for about 3 miles until the the path met the sidewalk and without shade it became too hot to walk any farther.

Most of the casinos in Reno do not allow overnight RV parking or have lots that are too small.  Overnight parking seems to be okay at the Atlantis which has a very large lot located across the street from the casino. The farthest away spaces are used by employees. Behind them is a gravel section where trucks and RVs were parked while we were there. We parked in the middle spaces between the employee parking and the street.

A sky bridge provides access from the lot to the casino, using both an escalator and an elevator. The casino is accessible but it has a lot of small areas that are separated from each other and have ramps so it’s a little difficult to get around.
Casino    39.48909, -119.79637

Bill Harrah, owner of Harrahs casinos, was an avid automobile collector, especially of rare and one-of-a kind models. Unfortunately he didn’t leave a provision in his will to preserve the collection.  Holiday Inns bought the hotels, casinos, and car collection in 1978 when Harrah died. The bulk of the collection was sold at auctions but Holiday Inns donated almost 200 cars to establish a nonprofit museum.  The cars range from a 1892 experimental steam carriage to a 1980 gold plated Delorean. 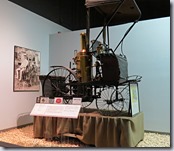 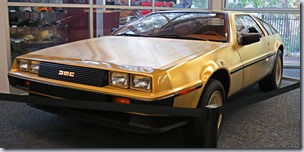 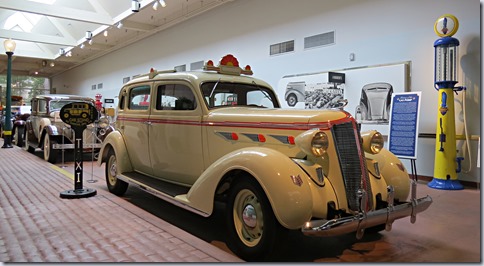 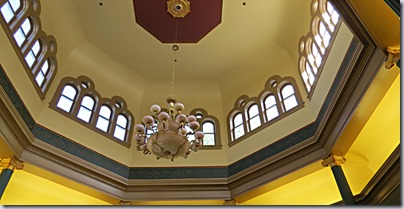 Nevada was part of Utah territory until the late 1850s when, after an unofficial vote, it declared itself a separate territory. This was good enough for President Lincoln who made Nevada a state in 1864. The silver and gold greatly benefited the Union war effort. Nevada’s capitol building, finished in 1871, is the second oldest capitol building west of the Mississippi. California’s capitol building in Sacramento is the first since it was in use a few years earlier even though it wasn’t finished until 1874.

The building was completely gutted in 1970s for earthquake retrofitting. Everything was saved and reassembled. It’s not an elaborate building but it’s still worth a visit. A small museum is on the second floor. 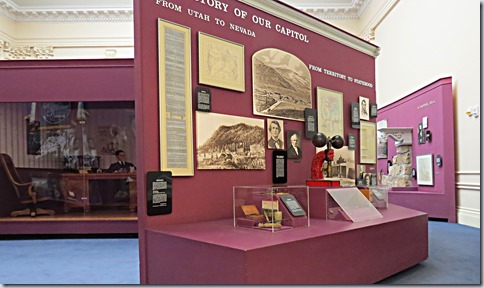 As we were leaving we caught the governor slipping out the side door.  He stopped to chat awhile and, even though he knew we weren’t from Nevada, he was genuinely nice, answered all of our questions and gave us two souvenir coins. 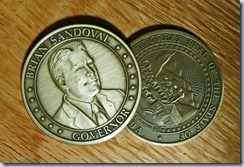 The accessible entrance is in the south wing. The museum is accessible.

We walked from our parking space at the Nugget Casino which is only a few blocks away from the capitol building and has plenty of room for RV parking.
Capitol   39.16391, -119.76643 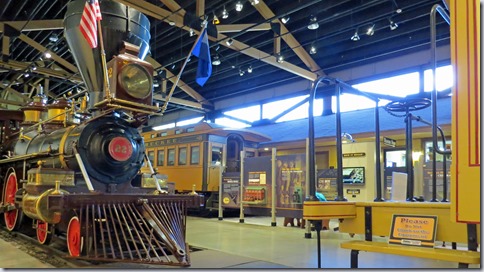 In 1870, Nevada's first short-line railroad, the Virginia and Truckee Railroad, was completed to haul ore from Comstock Lode mining communities to processing mills near Carson City. At the height of the mining boom as many as 45 trains steamed in and out of  Virginia City every day. Many of the locomotives and other equipment were bought by the movie industry and thus saved from the scrap pile.

The museum has four Virginia and Truckee locomotives on display along with rail cars and equipment. They’re in wonderful condition and beautifully restored. The trains in the main museum can not be boarded but two of the passenger cars in the shop can be toured. There’s also a large window so visitors can look into the shop where trains are being restored or serviced. On summer weekends train rides are available. The train makes a loop around the museum grounds. 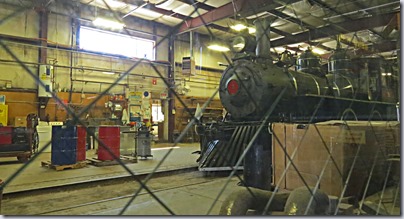 The museum is accessible. The shop is accessible but the passenger cars are not. The relocated 1906 Wabuska Depot has a ramp. This is where boarding for the short train rides takes place but I don’t know if the trains are accessible. 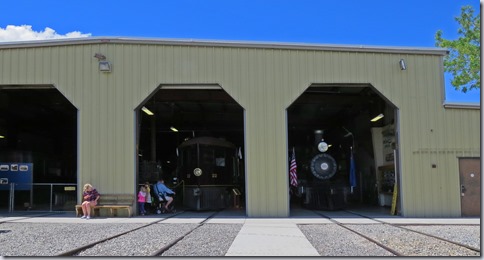 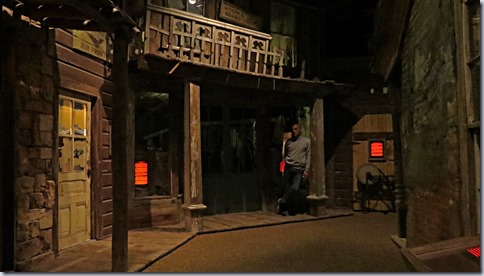 The museum is housed in the old Carson City Mint which was built in 1863 to mint gold and silver coins from the metals that were mined in and around Virginia City. From 1895 to 1933 it served as an assay office. In 1941 the city bought it and opened the museum. An addition was added in 1959. Coin Press No. 1 is still in place along with collections of the rare Carson City coins made at the mint. Other exhibits include Nevada history, geology, a ghost town, and a simulated mine. 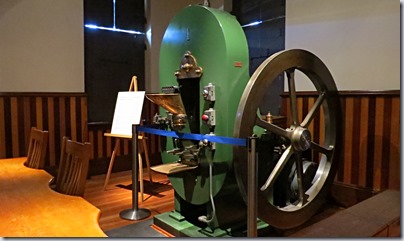 Most of the museum is accessible but the Nevada history section on the second floor of the mint has narrow aisles which get cramped when the museum is busy. The simulated mine is not accessible. 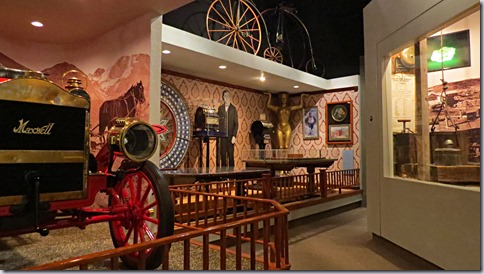 The museum is within walking distance of the Nugget Casino where we stayed while visiting the city. Lot # 4 was the designated RV lot for years but it has been blocked off. All of the other lots have outdated signs requesting that RVs be parked in lot 4 but we ( along with other RVers) stayed in one of the other little-used lots without any problems. The casino is accessible but the chairs are very heavy.