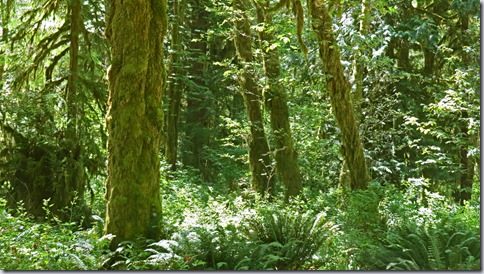 Olympic National Park is large with many roads that dead end which makes visiting all of the different areas of the park a challenge. Instead of trying to do just one post about the park I’m going to do short posts about each area. We visited Hurricane Ridge last year. This year we entered the park from the south so our first stop was Lake Quinault.

We drove around the lake on the Quinault Rain Forest Loop Drive.  The loop road is 31 miles long and travels through the rain forest with good views of the lake and Quinault River. The middle section which is unpaved for about 10 miles has a few narrow parts and is not recommended for RVs. We had no problems but larger RVs should not be driven on it. The campgrounds on the southern half of the road are small and the sites are not long enough for RVs over 16’.

Two of the hiking trails along the north loop road are accessible. Wheelchair users may need to have help due to areas with loose stones and minor obstacles.  Both of the trails start at the Quinault River Ranger Station. Maple Glades Trail is a 1/2 mile long and connects to Kestner Homestead Trail which is 1.3 miles. The trails loop back to the ranger station. 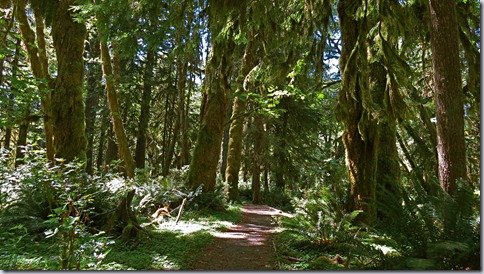 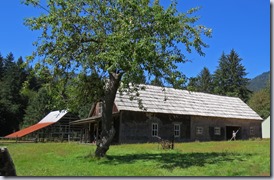 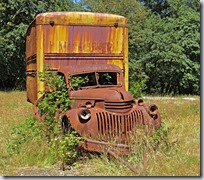 Museum of the North Beach 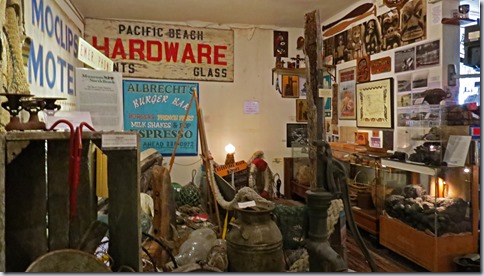 In the early 1900s the beach communities that line the coast from Ocean Shores to Moclips were ranching, lumber and fishing settlements and before that the homeland of the Quinault people. This little museum is full of donated artifacts and beachcomber finds including items that were swept into the ocean when the 2011 tsunami hit the Japanese coast.

The entrance to the museum has double doors. Both must be opened for wheelchair access. The ramp does not have a landing. The museum is a bit cramped so it isn’t completely wheelchair accessible but plans are in the works for a move to a new, larger building.

RVs will fit in the lot on the south side of the building. 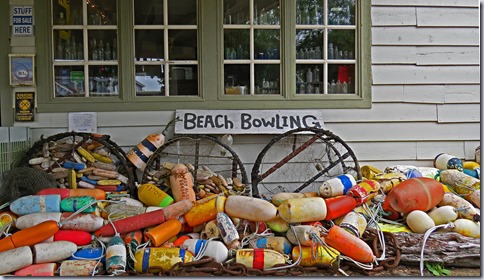 South Bend, which claims the title of oyster capital of the world, is a small town located on the Willapa River. One of the most popular attractions is the boat ramp and, oddly enough, on the south end of the parking lot there’s a RV space and a tent site - $10.00 a night for RVs and $5.00 for tents.

The RV site has an accessible table. There are trash cans and a porta-potti. Since US 101 parallels the lot it’s noisy during the day but quiets down at night. 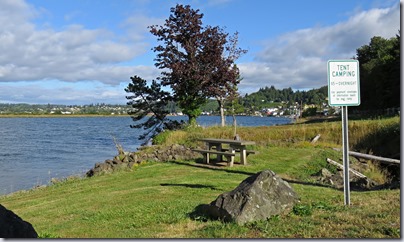 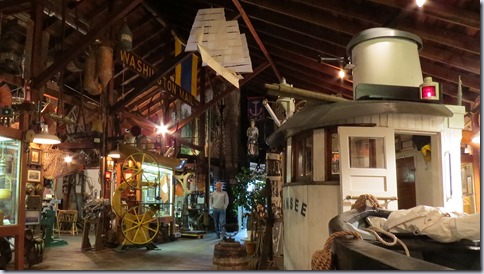 This little museum is brimming over with artifacts. Every nook and cranny is filled with some interesting item pertaining to logging, ship building, military life, pirates, and local history. The display cases have been nicely arranged and have little interpretive notes. 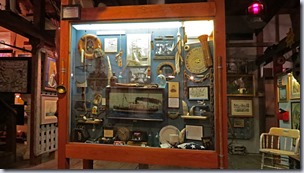 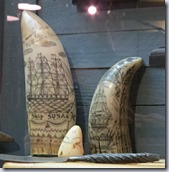 The museum is accessible but the entry ramp does not have a landing at the door which makes access a bit awkward.

Willapa Hills Trail, a paved bike trail, can also be accessed from the museum parking lot. The trail is paved for about 3/4 of a mile to the east and for about 3 miles to the west. The westbound section has a break after crossing the Willapa River where following the trail is a bit difficult because of business parking lots. Stay close to Ocean Ave. until the trail resumes. Watch for the sculptures! 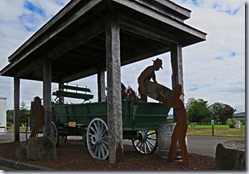 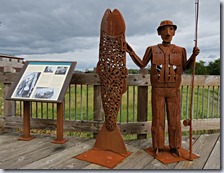 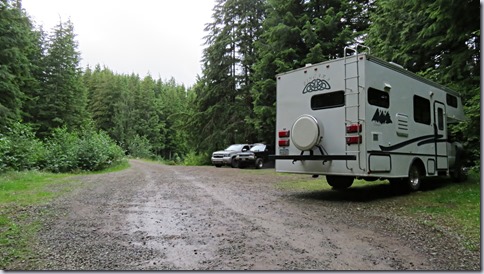 We’ve enjoyed camping at DNR and WDFW sites in Washington state. They’re usually small and primitive but easy to access and have enough space for small RVs. This one is a bit different. The road in is one lane, very steep uphill and surfaced with fist sized rocks. The three campsites are walk-in from a small parking area. Definitely not good for RVs but pretty nice for tent campers. 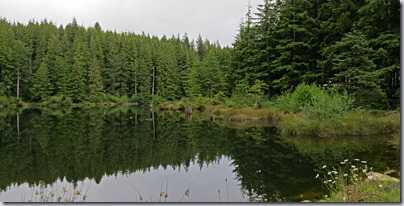 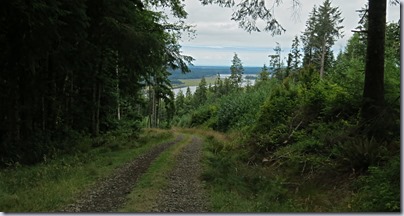 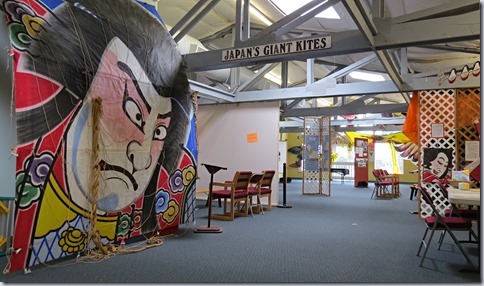 Long Beach with miles of sand and a constant ocean breeze is the perfect place to fly a kite. Every August thousands of people flock to the town for the Washington State International Kite Festival. It’s a week-long event with contests, kite battles and mass ascensions. If you can’t make it to the festival at least stop at the museum to watch some of the videos and view the exhibits. 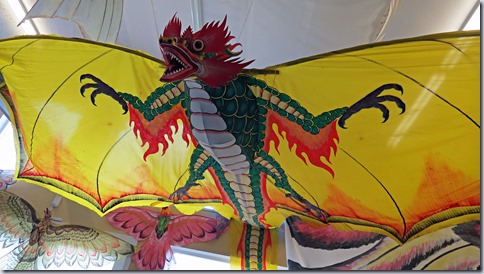 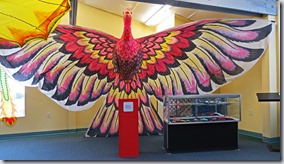 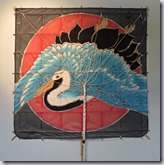 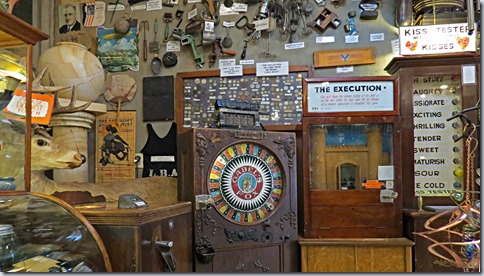 Marsh’s Free Museum is the ultimate beach town tourist trap. Wind your way through the seashells, antiques, stale saltwater taffy, mugs and tee shirts to the back of the store where a random assortment of tools, mounted animals and arcade machines are stuffed into every available space.  Don’t forget to look at all of the things hanging from the ceiling. Somehow we missed Jake the Alligator Man!

Marsh’s is accessible but the aisles are crowded with racks of merchandise and there may not be enough room to maneuver large wheelchairs and scooters. 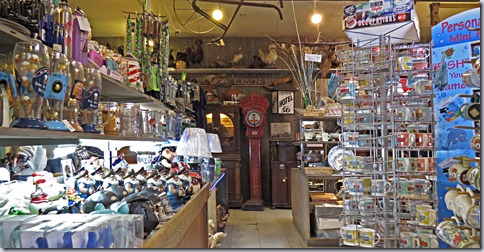 Parking of RVs is restricted on Pacific Ave. and Marsh’s parking lot is small but parking is available along the side streets.

Growing cranberries is a much more involved process than we ever would have dreamed. The machine on the right is a vacuum that sucks the berries off of the plants. They even wear special boots so that the plants don’t get crushed. 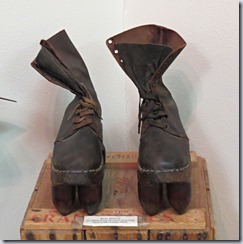 The museum is pretty small. Both the museum and the gift shop are accessible.

We spent a week camping on this beautiful, isolated piece of rural property along with a group of wonderful CheapRVLiving members. 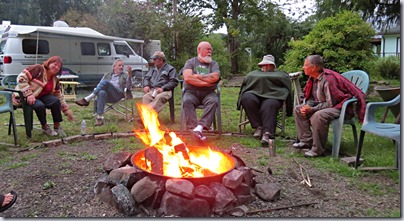 Some of us took a little trip to a favorite local restaurant, Camp 18, which is housed in a huge log building with lots of pictures and logging equipment decorating the walls. The food’s pretty good too! 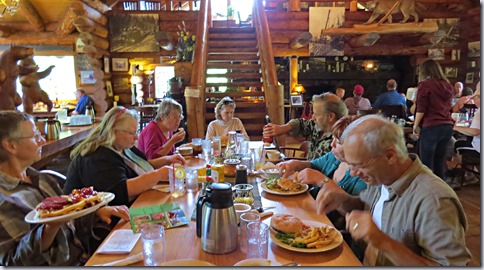 An outdoor museum with displays of all kinds of logging equipment is located on the restaurant grounds. A short trail follows the creek and loops around through the woods. A Loggers' Memorial with photographs and stories of loggers, some who were killed on the job, is housed in its own little building.

Hoffman Farms grows five different kinds of berries. It’s primarily a U-Pick operation but they do have an assortment of already picked berries in their cooler. They also make their own jams, jellies, salad dressing, pies, kettle corn and fresh berry shakes. We bought a flat of blueberries, blackberries and raspberries – yum!

The store is accessible. Park near the entrance to avoid the large, loose gravel in the parking lot.

The Harvest Hosts overnight RV parking spot is in the grass by the berry patches.  It’s a little noisy because of the traffic on Route 210. 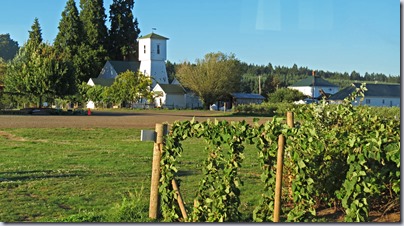 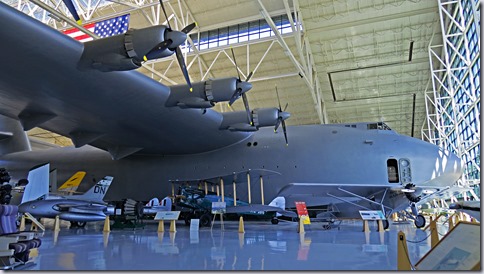 The “Spruce Goose”, a very large, experimental aircraft built by Howard Hughes, is the center piece of the museum. During WW II German submarines were sinking Allied ships so another method was needed to carry troops and cargo across the Atlantic Ocean to Europe. The Spruce Goose was designed to take off and land on water and was built almost entirely of birch because of wartime restrictions on aluminum. The war was over before the plane was finished but it did make one brief flight on November 2, 1947 which allowed Hughes to complete his government contract. 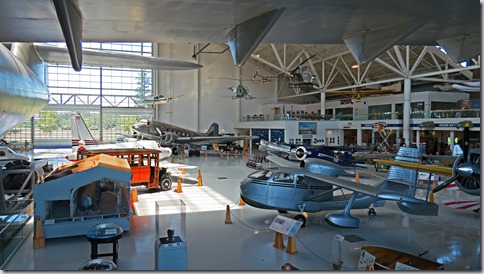 The Spruce Goose building also houses many smaller planes.   Another museum building has exhibits that cover the space race between the Russia and the US. Included are a Titan II missile and a SR-71 Blackbird. Four movies are shown daily in the theater building.

The museum complex is large, consisting of the two museum buildings, the theater, a chapel, a very nice playground, a park with trees and picnic tables, and a waterpark. It’s an impressive place but admission is expensive. We were eligible for free admission to the museums with our ASTC (science museums) pass and half price for the movies.

The museum buildings are accessible. The cargo hold in the Spruce Goose is accessed by a lift. We did not go into the cockpit but I don’t think it is accessible. We did not go to the chapel, theater or the waterpark. The park and picnic area has a 1/2 mile paved trail which is accessible but the beginning is concrete then there’s a drop off to gravel before it continues with asphalt. 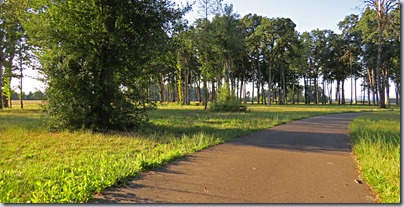 This is a Harvest Hosts site so we stayed in the parking lot overnight. Local families use the playground and trail in the park after the museum is closed but when they leave it’s a very quiet place. Parking for RVs, whether for the day or overnight, is in the lot by the huge Boy Scout arch. 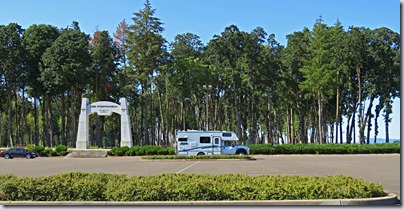