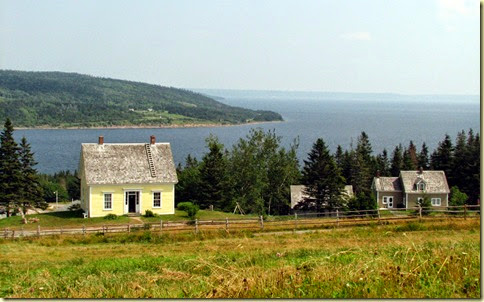 Ten historic buildings have been relocated to form a village on a hillside overlooking the Bras d’Or Lakes. Visitors walk through time, starting at a stone cottage representing a Scottish Highland dwelling of the late 1700s. The next house is a log cabin, the first home of Scottish immigrants in Canada. Each house has more improvements and the last, from the early 1900s, is located along a street with a schoolhouse, general store, blacksmith’s shop, and a carding mill. The houses are staffed with costumed interpreters who can answer any questions. The woman in the stone cottage is excellent so spend some time talking with her. 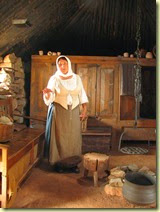 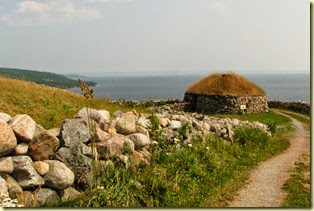 The village is not wheelchair accessible. The gift shop where the admission desk is located has a ramp without a landing, a door that opens outward, and a very high threshold. All of the buildings have steps without ramps. The paths are steep and surfaced with large, loose gravel. Two parking lots are located at different levels of the village for visitors who have trouble walking up hills. 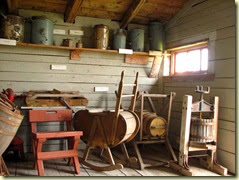 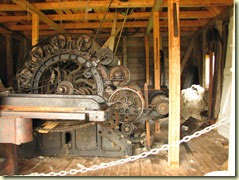 The Canso Islands were first used by European fishermen and fur traders in the 1500s. They built wharves, temporary houses, and platforms to dry the thousands of cod fish that they caught in shallow waters of the Grand Banks. By the 1700s both British New Englanders and French Canadians were salting and drying fish on the islands until the French were forced off in 1713. The British built a small fort, a few wealthy merchants built houses, and taverns were built for the soldiers and fishermen. Drying and salting platforms were built along the shore. Everything was burnt and the islands deserted when the French attacked them in 1744.

A small visitor center is located on the mainland. Visitors may watch a short film, view the exhibits, and take a boat ride to  Grassy Island. An interpretive trail circles the island.

The visitor center has a small lot where short RVs will fit. Larger RVs can be parked in the lot at the end of Water Street, west of the visitor center. A short trail along the shore goes to the center. It’s surfaced with large gravel and is not accessible.  Historic Site
45.33593, -60.99064 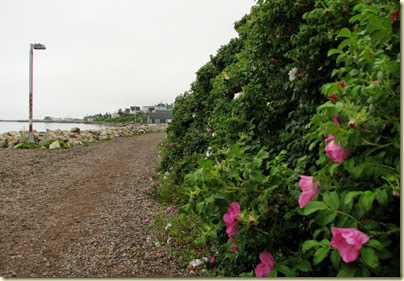 The sandy beaches and rocky outcroppings along the shore of this small park are accessed by boardwalks that travel through marsh and stunted forest. This section of Nova Scotia doesn’t draw many tourists so the park is very peaceful.

The boardwalks are accessible with great views of the shoreline. They’re not very long but still worth the short trip from the main road to the park. 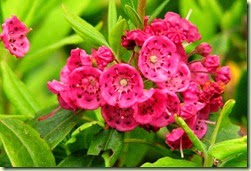 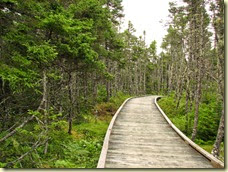 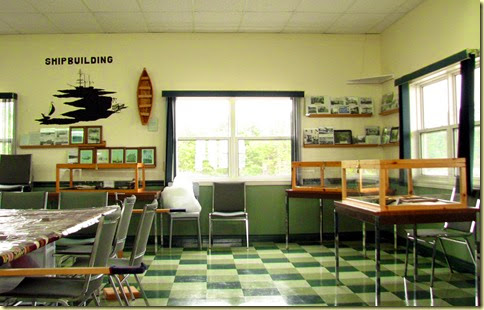 Photographs and cases with artifacts pertaining to the local history of Goldboro, which included gold mining, line the walls of the community center.

The center is accessible but many of the photographs are located too high for easy viewing. 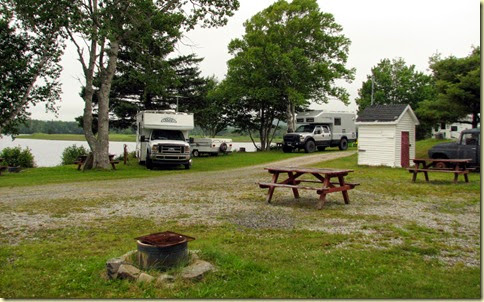 We don’t stay at private RV parks often but this one is at a great location for a visit to Sherbooke Village. It didn’t work out well for us because shortly before we arrived at the village the school house caught fire and the village was closed for two days. We’ll try visiting again sometime in the future.

The campground is small and most of the campsites are lakefront. We had a lot of room because the campground was fairly empty but it looks like it might be tight if  all of the sites are in use. Some of the sites are long enough for any RV. I didn’t check on accessibility for the restrooms or laundry. Fast free WiFi.  Campground
45.13173, -61.97774 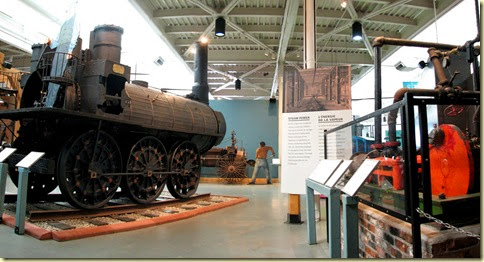 Nova Scotia natural resources supported a variety of industries – coal mines, steel mills, lobster canneries, paper mills, cotton mills, and glass factories. Many of the companies are no longer in business due to dwindling resources and competition from other countries but the museum allows visitors to view the types of machinery and equipment used and to also get a glimpse into the lives of the workers and their families.

There are 27 museums that are part of the Nova Scotia Museum. They’re located all over the province and include historic houses, old mills, and living history villages. If you’ll be visiting the museums you may want to buy a pass which is good for unlimited visits for one year to all 27.  Pass

The museum is accessible but some of the hands-on exhibits can not be experienced by visitors using wheelchairs.  The Shopmobile exhibit has steps but no ramp. 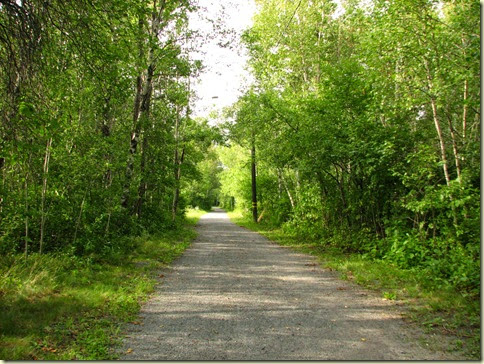 The Albion trail about four miles long and travels along the East River. It’s hilly with a crushed stone surface so we went just a short distance. Turn right from the entrance at the Museum of Industry parking lot to access a fairly flat section. 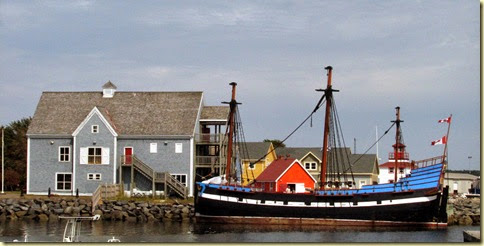 After the Battle of Culloden in 1746 - which was an attempt by the Scottish Highlanders to return the Stuarts to the British throne - was won by England, the Highlanders were stripped of their land, their leaders, their arms, and even their kilts and bagpipes. The hardship that followed led many Highlanders to emigrate to other countries. While the families who came over on the Hector were not the first group of Scottish to come to Nova Scotia, they were a fairly large group of Highlanders and Pictou, where they landed, is known as “the birthplace of New Scotland”.

The site includes an exact replica of the Hector, a very nicely done museum, a carpentry shop, blacksmith shop, and carving shop.

The museum is accessible. The ship and the workshops are not due to steps, narrow passageways, and large gravel. 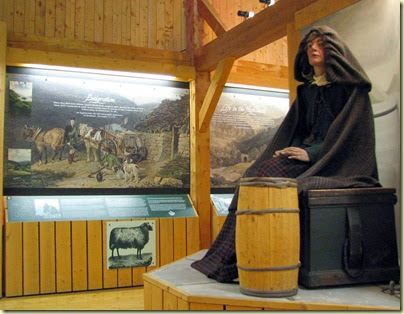 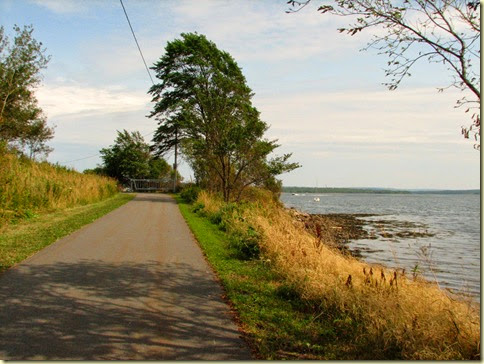 The paved section of this trail is about 1/2 mile long. It follows along the shore with nice views of the harbor and the village. It’s in good condition and fairly level. 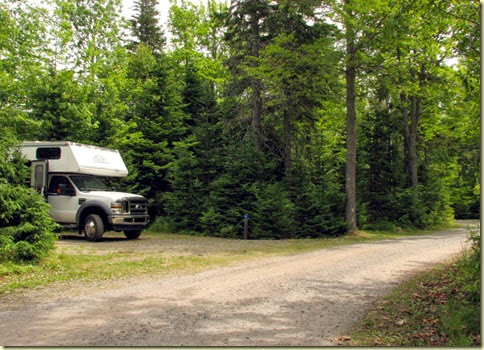 Two loops of this campground have sites tucked under the trees with enough foliage between them for privacy. The other loop is in a grassy field with ocean views.

None of the sites are marked as accessible but they can be used. The ground is hard packed dirt and the tables have a fairly long overhang so wheelchairs fit under. We didn’t check the shower house which is supposed to be accessible.The vault toilets are not accessible. 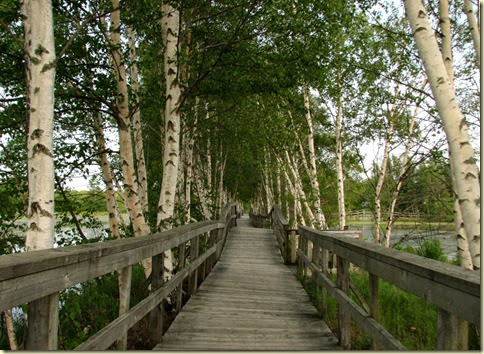 Crushed stone and boardwalk trails make a one mile loop around the lake, traveling through a variety of plant communities including birch forest and cattail marsh. We’ve not birders so I’m not sure about the species of birds that we saw but there were many ducks and also a couple of muskrats. 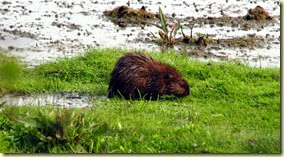 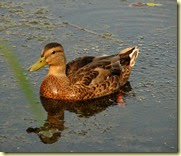 Most of the trail is accessible but wheelchair users will need to have help to complete the entire loop due to a very steep ramp on one of the bridges, uneven boardwalks, and loose stone in several spots. 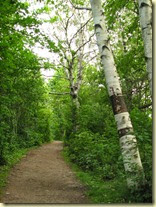 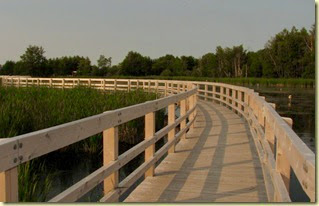 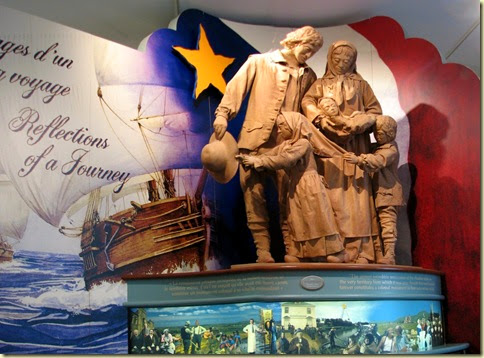 Father Lefebvre, a Catholic, priest, founded Saint Joseph's College in 1864, the first French-language college in the Maritimes. The college has since moved to a new location and the original school is now a small museum where the story of the deportation of Acadians from Nova Scotia and their resettlement in New Brunswick is told. The exhibits also cover Acadians living in New Brunswick who are influential in politics and business.

A long ramp leads to the accessible entrance where pushing a buzzer should alert the museum personnel to open the door. No one noticed the buzzer when we visited so you may have to call instead. The displays are all accessible. 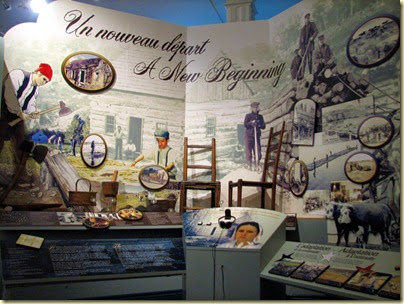 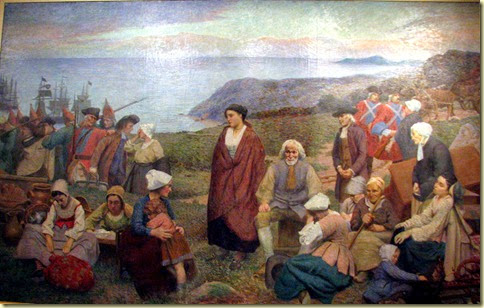 The story of the Acadians is complicated and sad. During the 1600s French settlers immigrated to Nova Scotia where they established farms. Their unique culture, which developed through their isolation from other European settlements, flourished for almost 80 years until the Conquest of Acadia when Nova Scotia came under British control. A uneasy peace between the British government and the French settlers lasted until 1755. Britain decided that the land should belong to British subjects and began raids on Acadians villages that continued for nine years.  British soldiers rounded up all of the French, burnt their farm buildings, and loaded them onto ships. The Acadians were allowed to take clothing, money, and a small amount of household goods. The ships had no destinations. Some sailed for months before finding a spot, mostly in the US, where the Acadians were welcome to live.  Over 10,000 people were deported and approximately a third of them died. In 1764 British policies changed and Acadians were permitted to move back to Canada but not to their former villages. Many settled on the east coast of New Brunswick.

The small museum focuses on the French who returned to live in New Brunswick but also touches on the ones who emigrated to France or settled in Louisiana to become Cajuns. The admission price includes entrance to the art galleries with displays of student artwork. 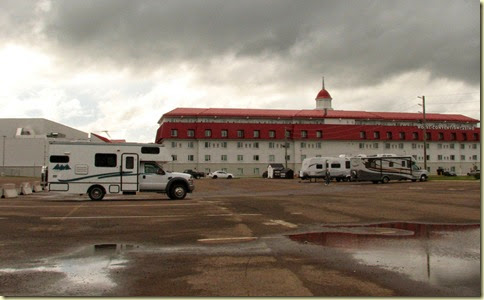 Follow the signs for RV parking which is located in a back lot. The lot is very big with plenty of room for everyone. A list of rules is posted at the entrance – sign up for a players cards and you may stay for seven consecutive days. There’s some traffic noise but other than that it’s fairly quiet. The 24 hour quiet period keeps generator use down. We were able to use free internet from the casino and one of the hotels.

The casino entrance is accessed by walking under the covered passageway between the hotel and casino then along a slightly steep, short length of sidewalk. The casino is nonsmoking and not very large but it has a good selection of slot machines plus table games and a poker room.  The chairs are fairly easy to move and most of the card and money slots are easy to reach.  Casino
46.12874, -64.8778 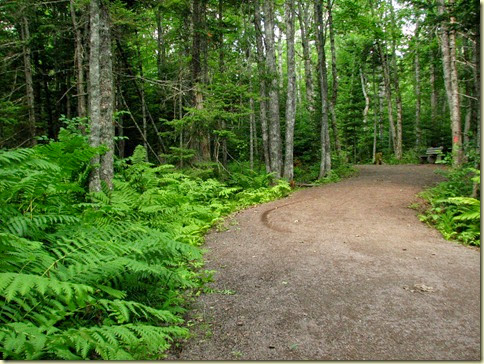 The trail makes a loop through a young forest, opening up for a lake view a couple of times. The surface is hard packed, crushed stone so rolling is fairly easy.  It’s about three miles long and has a very steep bridge halfway in. Most wheelchair users will need to have some help or else turn around at the bridge. Go counter clockwise for the best views if you can’t make the round trip. The loop trail is marked with red. The yellow trail is closed because it hasn’t been maintained. 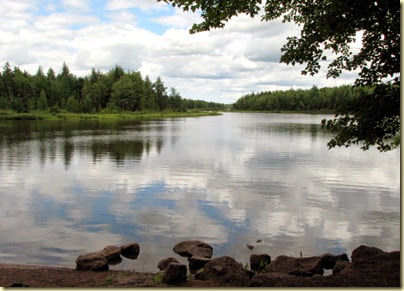 Local families have donated all sorts of old equipment and other articles that were necessary to operate a farm in the early days of settlement but the museum has few descriptive signs or historic information. Without that it’s more of a collection than a museum so this is a pretty quick stop.

A couple of pieces of equipment partially block the front patio so wheelchair users will have to cut across the grass to get to the entrance. There’s a short step up to the patio and another at the threshold. Some doorways in the museum are narrow but there are ways to get around most of them. 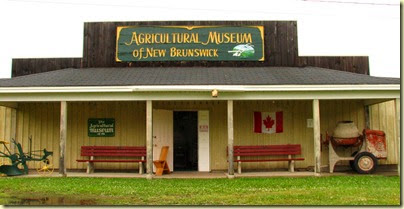