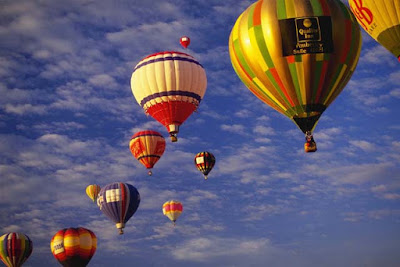 Naturally people are curious about my accident but many hesitate to ask. I don't mind talking about it but in my day to day life I ignore it as much as possible. It's just my way of coping with the frustration and loss of freedom that would tend to be overwhelming for me if I did focus on it more.

In October of 1993 we were visiting friends in Albuquerque, New Mexico. We were there for the big hot air balloon festival. I had attended the festival a few years before but Tony had never seen it. Out friends had a balloon so every morning we were up early to be part of their crew. We would help roll the balloon out on the ground and keep it all steady as it filled with hot air and the basket slowly tilted into an upright position. Then after the balloon was launched we joined the chase crew. The chase crew would keep in contact with the pilot by radio and visually. When a good landing place was spotted the pilot would bring the balloon down and the chase crew would again steady the basket by placing their hands on the rim as the pilot let the balloon deflate and the basket would be allowed to tilt back down on it's side.

On October 3rd we once again joined the chase crew. By 10:00 AM it had become too windy to fly safely and our friend's balloon was  packed away and we were off to join in the other festivities. Just as we were pulling out of the landing area we spotted another balloon coming down with no chase crew in sight. Our friend called up and asked if the pilot wanted a hand.When he said yes we all piled out of the truck and ran over to his balloon which was just touching down. I was the last one to reach it and headed for a corner near the pilot. Unknown to me the pilot had been letting the vent rope fall outside of the basket. This is not considered a safe practice. As I put my hands on the basket, I also stepped into a coil of rope. The pilot let  go of the rope for a second, the basket took a leap forward and the rope tightened around my ankle. I was pulled violently off of my feet and tumbled around on the ground. I ended up about ten feet behind the basket with the rope still around my ankle. I was pretty dusty  but I didn't have a mark, cut or bruise anywhere except for a lump halfway down my back where the bones in my spine had shifted out of place and smashed my spinal cord. I knew what had happened immediately. It was devastating, realizing that in one second the life  that Tony and I had worked and planned for over many years, was gone.

The next week or so was pretty much of a blur. I spent over a month in the hospital and had two operations to stabilize my back. I then spent almost two months in a rehab center. We received an outpouring of support from our friends in Albuquerque, the ballooning community, and our friends and family back east which really helped us get  through it all. I thank them all again.

After my release from the inpatient rehab center I went to an outpatient center for about five more months. Some people with spinal cord injuries make complete recoveries and some make partial recoveries. Most recover a bit more function but rehab is mostly to build up the remaining muscles and to get the patient accustom to living with their injuries.

We never considered giving up our traveling life and started looking into our options early.We were more fortunate than most people who have an injury like this in several ways. First I was covered by my union's insurance which was very good and second the balloon pilot and owner had a million dollars of accident insurance. We naively thought that, since the accident was caused by a pilot error, the insurance company would willing pay us. I was losing much more than a million dollars in future earnings and loss of normal functioning but it doesn't work that way - we had to sue them.

People hesitate to ask about money too but I don't mind talking about that either. How can anyone make a plan without knowing all of the details?  Our lawsuit progressed very fast. In early June  1994, we were a day away from a court hearing when the insurance company made us an offer to settle out of court for $800,000. Since lawyer fees and expenses would mount rapidly once we started a trial, that was a good offer and we accepted it. By the time the law firm got it's percentage and the union was reimbursed for half of my expenses we were left with about $400,000.  That money is invested very conservatively and we don't touch the principal. Mostly likely, as we age, we'll need to spend a good chuck of the money for accessible housing or assisted living so we hesitate to spend it now. I also get Social Security and a small union pension. In late 2012, Tony reached old guy status so he's now drawing Social Security and a small pension.We live semi frugally, meaning we don't spend a lot of money on certain things like campgrounds but then spend it for other things such as gas money to travel.