By Mirriam-Webster’s definition of a ghost town “ a once-flourishing town wholly or nearly deserted” this campground would fit the definition of a ghost campground. Dozens of crumbling concrete tables are scattered over the large acreage of a grassy park. Very few have any type of parking area. Dirt roads zig zag randomly through the park, some in very bad condition.  But strangely enough the park has restrooms, hot water showers, many fresh water faucets, a dumpster, and a battered shelter with electric outlets. And it’s free!

We planned to stay for just one night but it was so quiet and peaceful that we stayed an extra night.

The main road into the park is gravel, in fair condition, and shouldn’t be a problem for any RV type or size. Many of the other roads are dirt with deep ruts and soft spots. Use caution when driving on them. 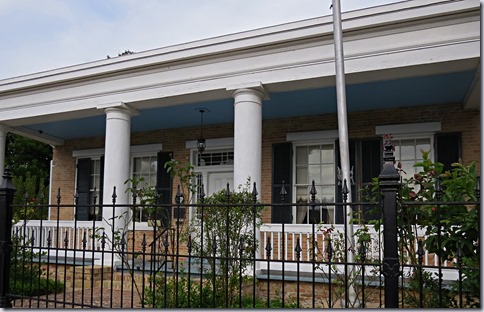 The Stillman House is one of the oldest houses in Brownsville, built in 1850 and occupied for three years by Charles Stillman, a businessman from Connecticut, who founded the town of Brownsville. By 1875  the house was owned by Manuel Trevino. One of Trevino’s guests was Porfirio Diaz, a Mexican general who, while living in the US, made plans to overthrow the Mexican government. Diaz was successful, becoming president and dictator for 35 years, until he was ousted from power in 1911 and Mexico was thrown into turmoil for the next 20 years. Some of this history is covered in the heritage museum with information about revolutionaries Venustiano Carranza, Emiliano Zapata and Pancho Villa.

One of the most interesting exhibits in the museum is a German made MAN. It’s a large omnibus, custom made, and owned by a member of Diaz’s regime but there’s no record of it being built or of it entering through customs in the US or Mexico. Other exhibits cover early history of Brownsville and Matamoros, Mexico which was an important Confederate port used in smuggling cotton to Europe during the civil war. 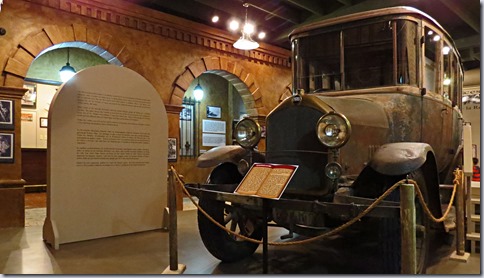 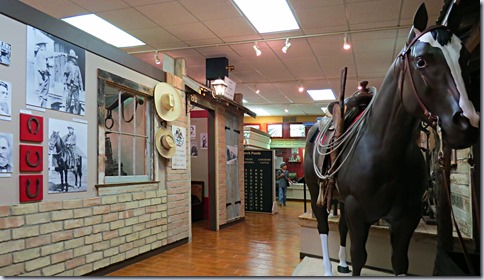 The museum is accessible. The house, which is furnished with period pieces and also has exhibits about the Stillman family, is accessible. A small courtyard at the house is accessed by steps only. 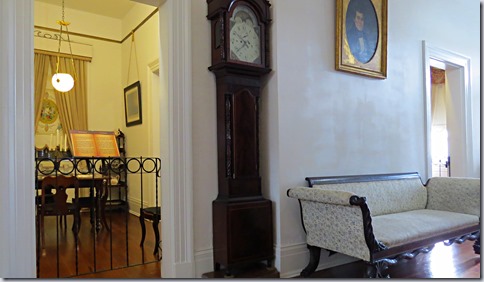 Parking is limited. The museum lot is too small for RVs but several spaces on the street are reserved for museum visitors. RVs will fit by using two spaces. Get a pass at the admissions desk to avoid a ticket. 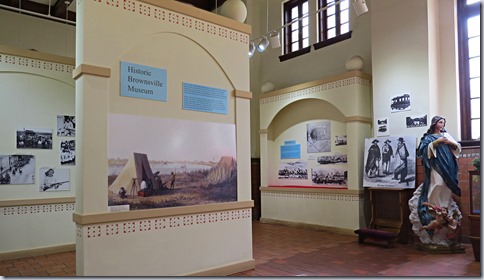 Located in the pretty 1928 Southern Pacific Depot building, this museum has one gallery with artifacts and information about the early history of Brownsville and another gallery with artifacts from St. Joseph Academy but no information about the school. Locomotive # 1, which ran between Port Isabel and Brownsville delivering cargo and passengers to the town, is housed in a separate building along with railroading artifacts. Both buildings are accessible.

Two small parking lots are located on East Madison Street on either side of the museum.  Small RVs will fit in the lots, larger RVs can be parked on the street. 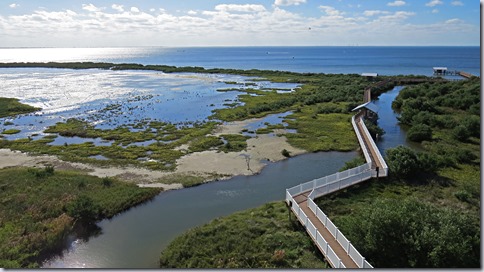 More than 500 different species of birds have been spotted in the Rio Grande Valley making it one of the best birding areas in the country. Late fall through spring, when the birds are migrating to and from North, South, and Central America, is the best time to visit. As usual we did not visit at the peak time so the birds that we saw were permanent residents. 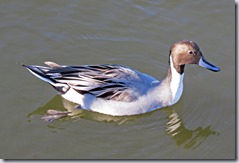 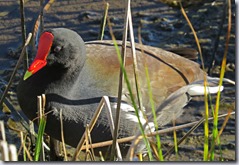 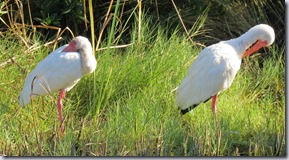 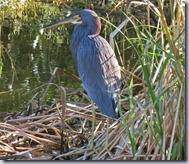 The site includes a small interpretive center, a gift shop, a butterfly garden, an observation tower and a 3,000’ boardwalk trail. The trail travels through different wetland habitats which are maintained for easy viewing of the birds. There’s a fee to visit the center and the boardwalk. An additional boardwalk (which we did not visit ) at the Convention Center, located just north of the Nature Center, is free. 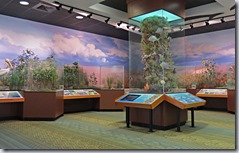 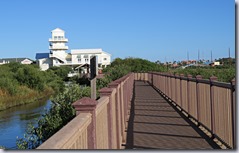 Everything on the site is fairly accessible. One of the touch screens at the center is too high to be usable from a seated position. The top railing on the boardwalk blocks the view so it’s necessary to peek through the fence slats to see anything.

The parking lot is very large so any RV will fit.

Largest Outdoor Sandcastle in the USA 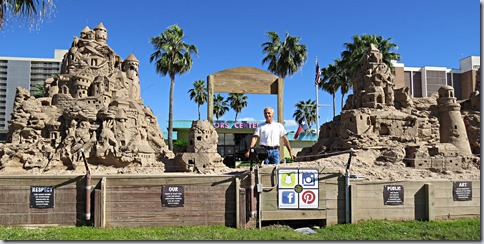 The sculpture was built in 2013 by Andy Hancock, a local artist who gives lessons on castle building. There’s a bit of help going on here though – the sand used is river sand which has some clay content. Glue and fixative helps hold it together. It’s still very cool.  We discovered after we had left South Padre Island that there are about thirty more sculptures scattered around town. Something to see next time! 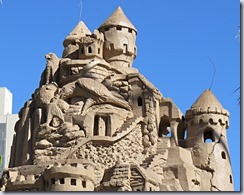 Gladys Porter, who was responsible for administering the funds from a foundation that her late father established, decided that the Rio Grande Valley should have a zoo. The foundation planned, built, stocked, equipped the zoo then turned it over to the city of Brownsville. Since the zoo was built in 1971, relatively recent for a zoo, most of the enclosures are fairly nice. It’s also been upgraded over the years but I still think that cats should have larger enclosures.

The zoo has a good collection of animals from the Americas, Asia,  Australia, and Africa plus birds, fish and reptiles. The paths are nicely landscaped and shady. 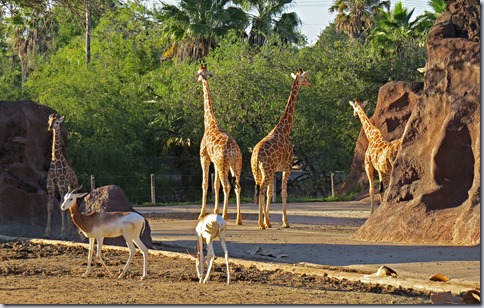 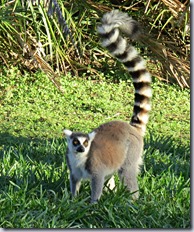 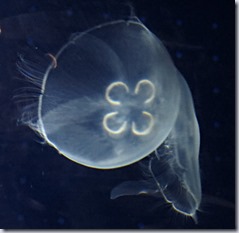 Most of the zoo is accessible but some of the enclosures have fencing that partially blocks the view for visitor using wheelchairs. A few ramps are very steep but there’s usually an alternate viewing area.

The main parking lot is small with low hanging branches at the entrance and has a fee. The one directly across Ringgold Road is free and much better for parking a RV. 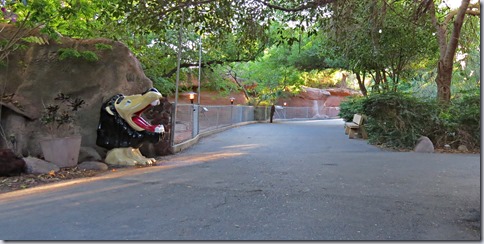 Even though Texans declared themselves an independent country after defeating Santa Anna’s army in 1836, the Republic of Texas was never recognized by Mexico. In 1845 the US annexed Texas as the 28th state in the Union and President  Polk ordered General Taylor and his forces south to the Rio Grande into territory that Mexico claimed as theirs. On April 25, 1846 the US army was attacked by the Mexican army at Palo Alto which started the two year long Mexican-American War.  The war ended with the defeat of Mexico and the treaty of Guadalupe Hidalgo. The US gained a large amount of very valuable land – Texas, New Mexico, Arizona, Utah, Nevada, California and half of Colorado.

The historic park contains the entire battlefield and has a trail with interpretive signs. A short video is shown at the visitor center and exhibits explain the causes and results of the war.

The visitor center is accessible. The 1.5 mile round-trip battlefield trail is paved and level.

The parking lot has spaces for RVs.

Three historical buildings, the family home of Lon C. Hill, Harlingen's town founder; the Paso Real Stagecoach Inn; and Harlingen's first hospital,  have been relocated on the grounds. They are furnished with period artifacts including some that were originally used in the buildings. There are also exhibits in the main building and historic museum. The historical museum was closed for repairs and we did not visit it so this was a very short stop for us. 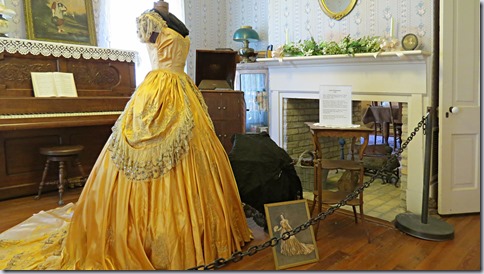 The site is partly accessible. The main building is accessible. The Hill house has a good ramp and most of the rooms in the interior are barrier free. The thresholds between the rooms are high which could be a problem for some users. The hospital and inn have ramps. Both buildings have multiple exterior doors which access different rooms. All of them have a high step at the entry and are not accessible because of this. The historical museum entrance appears to be accessible. 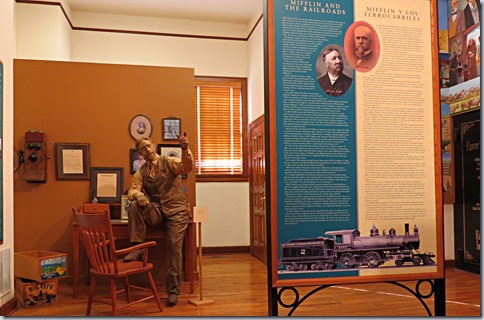 Mifflin Kenedy and Richard King, of King Ranch fame, were both river boat captains in the 1850s and partners in a steamship company. They also joined together to buy a portion of the Santa Gertrudis Ranch in 1860. The ranch partnership ended in 1869 and Kenedy bought and sold other ranchland before settling on the 400,000 acres of La Parra Ranch in 1882. The Kenedy family business interests included oil wells, railroad development, and real estate investments. When the last living relative, Sarita Kenedy East, Mifflin’s granddaughter, died in 1961 the ranch was turned over to the Kenedy Memorial Foundation, “a non-profit corporation that supports and funds mostly Catholic, educational, charitable, and religious activities primarily in South Texas”.

The  Kenedy Ranch Museum tells a much more balanced and interesting story than the King Ranch Museum.  Information about the families who were the originally Spanish land grants owners, personal stories about Kennedy family members, and details about the other family ventures add a lot to the museum.  A short paved trail loops with interpretive signs make a loop around the grounds. 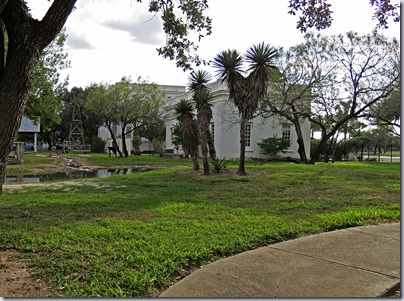 Ramped access is located in the rear of the building. The interior and exterior displays are accessible. 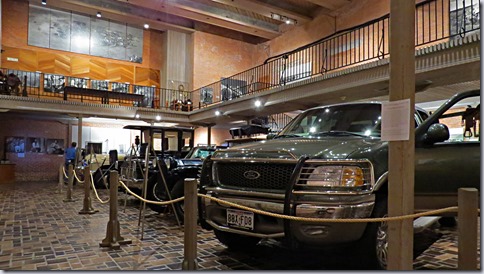 Most likely everyone in Texas knows about the legendary King Ranch but all we knew were that some Ford trucks have a King Ranch logo on the fender and cost a ridiculous amount of money. So we went to the museum and learned that in 1853  Richard King, a river boat captain who amassed a tidy sum transporting goods during the US war with Mexico, brought a Spanish land grant in southern Texas. Over the years he and his business partners continued to buy land and now the King Ranch is the largest ranch in Texas at 1,289 sq miles or 825,000 acres.

The ranch is still in the King family and the family business has branched out to include horse breeding, farming, citrus groves, pecan groves, hunting camps, oil drilling and retail stores selling hardware, leather goods and farm equipment.

The museum is one large room with very few artifacts. Watch the video (which is basically a promotional film) to get the story of the ranch. Due to small size of the museum and a lack of information we thought that the admission price was too high even with a buy one/get one coupon.

The main floor is accessible. The second floor which is a balcony level is accessed by steps only. A photo book of the displays is not provided.

We were expecting a garden so we were somewhat surprised at the large reptile and exotic bird exhibit. Many are rescued pets that the owners had to give up. Most of the garden acreage has been left in a natural state. The more manicured areas include Rose, Plumeria, Hummingbird, Desert, and Tropical Gardens. There’s an enclosed Butterfly House (few butterflies at this time of year), and Orchid and Bromeliad Conservatories. 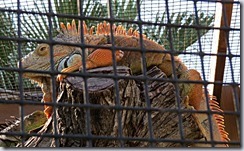 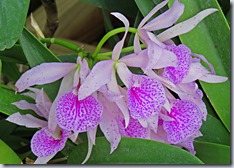 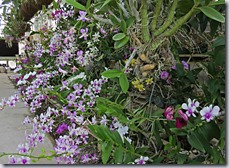 The entrance to visitor center has a short step up. The main paths are paved, hard packed finely crushed stone, or boardwalk. The boardwalk sections are very steep were they meet the ground. The Oso Creek Loop Trail is rocky and rough but it may be possible to roll along it with assistence.

The parking lot is large enough for RVs.