A main goal when I started this blog was to provide information that could be used - especially by people with limited mobility - to determine if an attraction would be a worthwhile visit. (This makes for pretty dull reading at times! :-D )To achieve that goal I include links in each post so that readers can research more on their own if they desire. A problem comes when attraction websites are updated because sometimes the links get broken. I try to keep them updated but as my posts and maps grow so do the links. I recently went through every map and blog post and corrected the broken links, however, it seems like more broken ones pop up all of the time so it’s an ongoing effort.

While I was fixing the links I also added clickable GPS co-ordinates on each post and updated the little maps so that if they are clicked on the attraction is pinpointed on a larger state map. 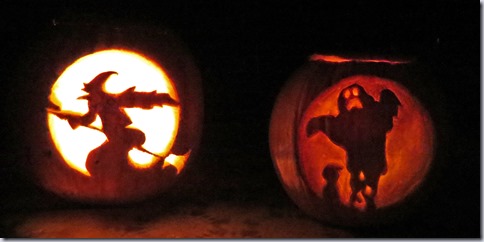 Time for all of our yearly appointments and checkups. We’ll be stationary for 2 or 3 weeks so I won’t be posting very much. Please check back in November.

Thank you for reading and commenting!

There isn’t a designated oversized vehicle lot so we parked in the north lot which appears to be lightly used. It’s a bit of an uphill trek to the casino entrance.

The store at Fulton Farms has lots of in-season produce plus a nice selection of specialty canned goods and snack items. We were hoping to buy organic apples but unfortunately they no longer sell organic produce. We ended up buying a really good cherry pie though. :-) 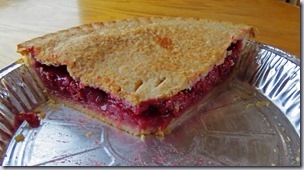 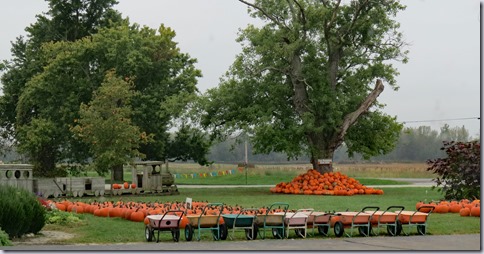 The store is accessible. 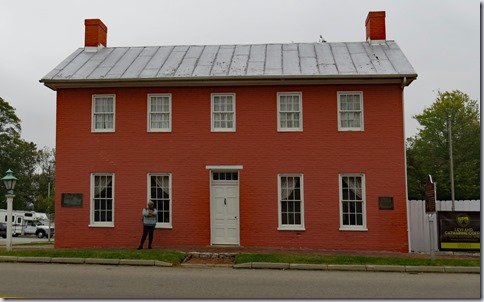 Levi and Catharine Coffin were Quakers who opposed slavery and worked against it by providing a rest stop and transportation for slaves escaping to the north and Canada. They helped over 1,000 people achieve their goal of freedom.

The site includes a small visitor center, the Coffin house, and a small carriage house with a wagon and carriage.  Guided tours are given in the house. The visitor center has a short video and exhibits on the third floor. 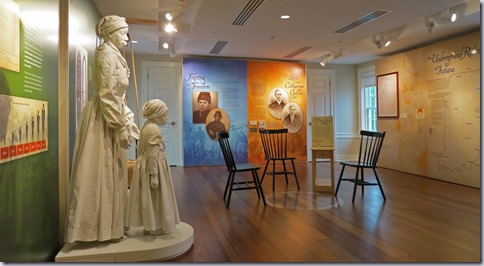 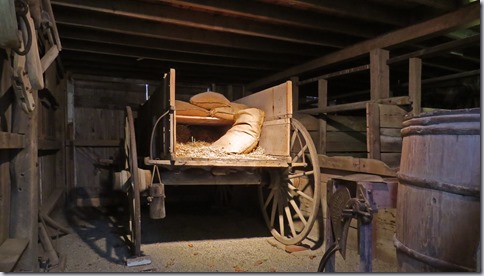 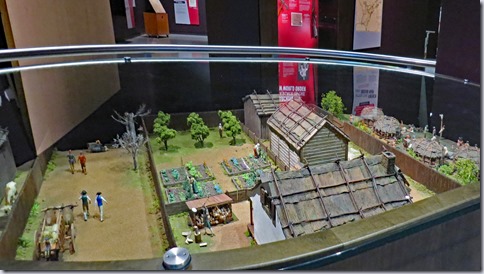 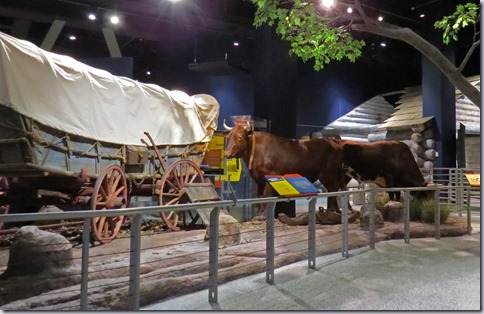 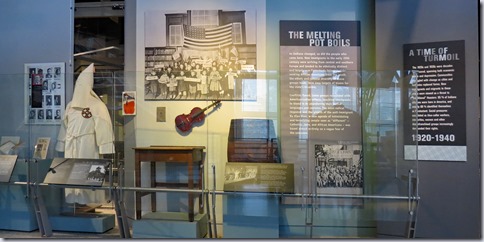 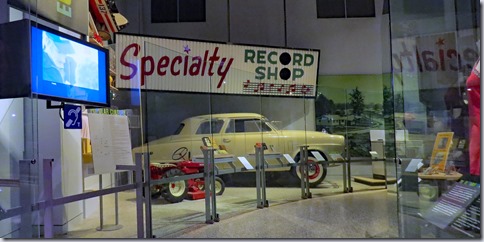 Parking near the museum is limited. We parked on West New York Street and cut diagonally across Military Park to the museum. The sidewalks and curb cuts are in good condition. Museum  39.7683, -86.16939 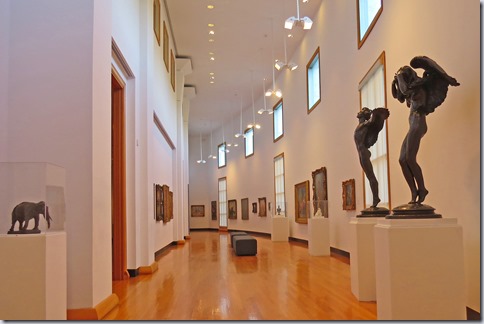 There a lot of variety in this small museum which has seven galleries of permanent exhibits and five galleries of changing exhibits. African carvings, Roman vases, art glass, and European paintings are all represented but the most impressive exhibit is the large collection of ancient Andean art donated by Fred Olsen. 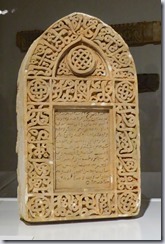 The accessible entrance is on Sixth Street.

The museum lot is not large enough for RVs. RVs can be parked on Peabody Drive in front of the museum. If the spaces are signed as Krannert  Art Museum parking be sure to get a parking pass and also put money in the meter.  Museum  40.10152, -88.2313 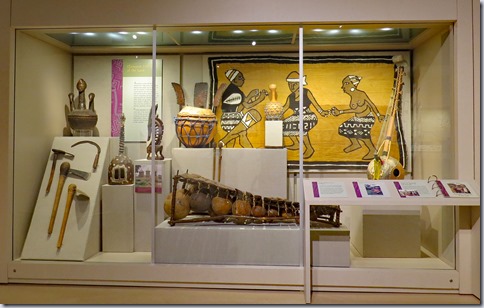 Most of university museums that we’ve visited have been small and somewhat outdated but this one is wonderful in both the size and scope of it collections. The first museum at the University of Illinois was established in 1911 and throughout the years other museums merged with it. All of these collections are now housed in the new Spurlock Museum which was built in 2002.

The museum explores seven regions of the world, the differences and similarity between cultures, and how cultures change, stay the same, and influence other cultures. The quality of the artifacts is outstanding, even the plaster casts of large Roman and Greek statues and frieze panels are excellent. We highly recommended this museum. 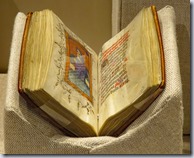 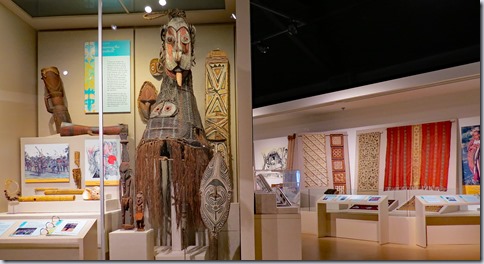 The museum is accessible but some of the display cases have  signs laying flat which makes them hard to read from a seated position.

Museum of the Grand Prairie 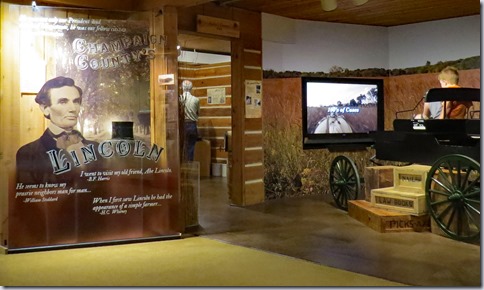 Hands-on exhibits makes this a fun museum for kids. There are three main areas with stories of settling and farming on the prairie, a well stocked blacksmith shop with tools used by the Chesebro family for 40 years, and a trip through nearly 20 years of Abraham Lincoln’s life as he practiced law on the 8th judicial circuit in Illinois. 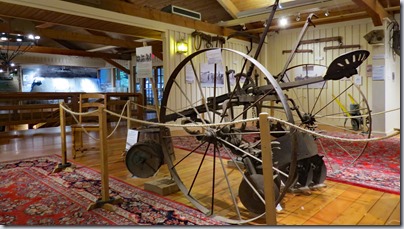 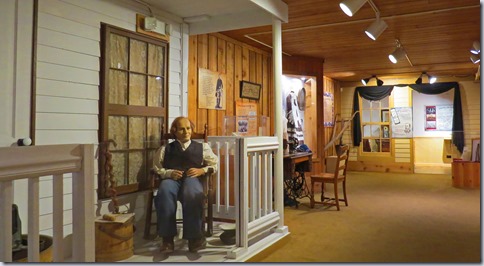 The main level is accessible. The blacksmith shop level has a roll on stair lift. The Lincoln exhibit level has a small elevator type lift. Both require a key and assistance from the museum staff.

The Mabery Gelvin Botanical Garden is located at the rear of the museum. I believe the paths are paved and connect to paved paths that circle through the park but due to rainy weather we did not check them out. 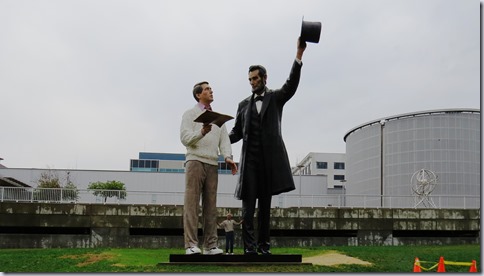 Art, history, and science can all be explored in this museum. None of the exhibits are very large so it doesn’t take long to see everything.

The art gallery features changing exhibits. During our visit it had some pretty cool stuff by local artists. 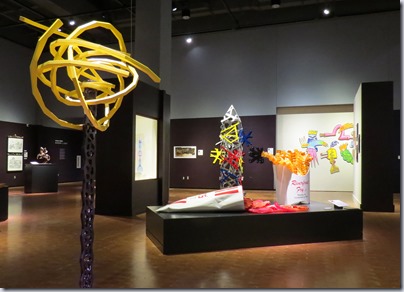 The history gallery gives a good overview of Peoria which owed it’s early growth to the whiskey industry. Easy access to good water, oak trees, and grains spelled success for over a dozen distilleries and breweries that lined the Illinois River in the 19th and early 20th centuries. In an era when most of the federal government’s revenue came from excise taxes (mainly on whiskey) Peoria supplied almost half of the money. Passage of the 18th Amendment in 1918 brought an end to the industry which didn’t recover even after the amendment was repeated in 1933. 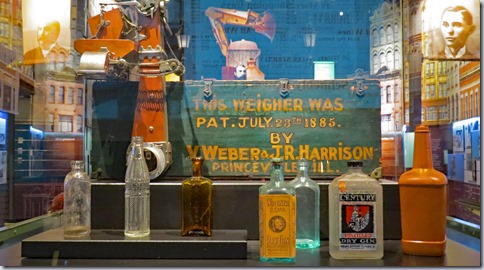 The science galleries feature exhibits about the ecology and the people of Illinois River region; a hands-on strength, dexterity, and knowledge area; and a planetarium. 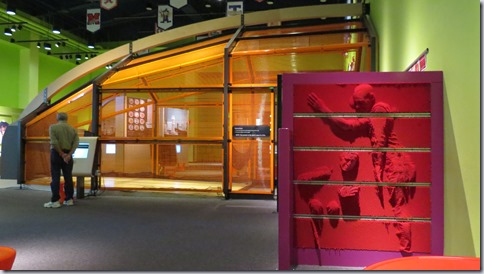 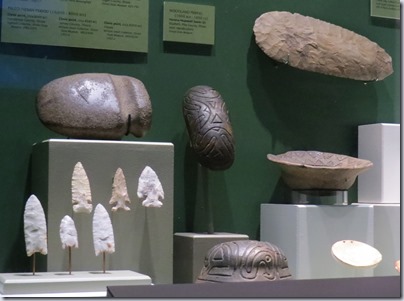 The 13 paved miles of the Rock Island Trail starts across the street from the museum and follows along the Illinois River before turning north at the zoo. We went about a mile and found it to be wide and smooth. 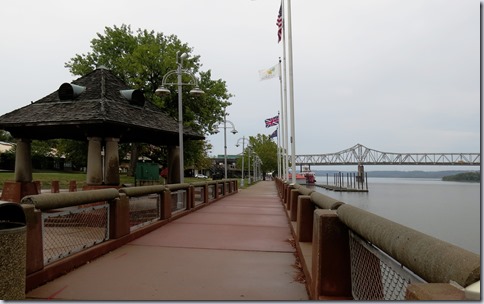 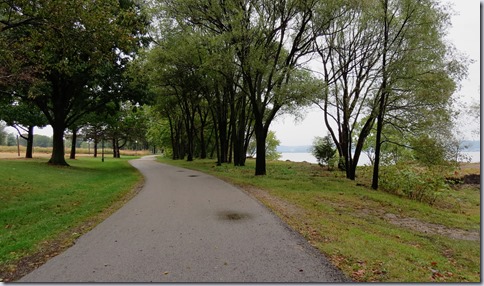 Two parking lots on the south side of Water Street are large enough for RVs if they can fit by pulling through two spaces. 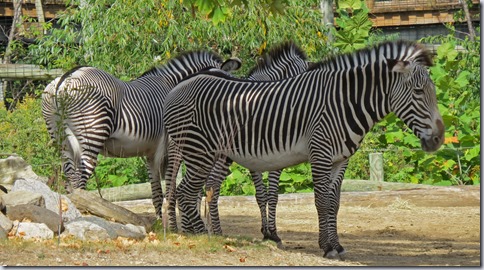 A surprising number of large animals are part of this small zoo – zebras, giraffes, tigers, lions, and rhinos along with an assortment of smaller animals and reptiles. Most of the enclosures are very roomy.

The zoo paths are wide and paved but not level so wheelchair users may need assistance. The reptile house entry door has a high threshold making it difficult to enter. 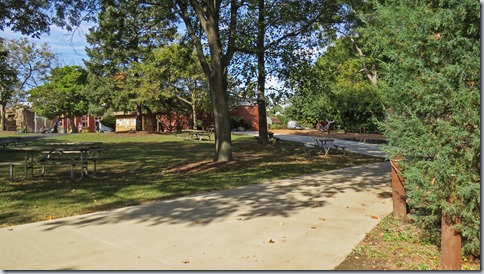 The parking lot is small but RVs will fit if backed up over the grass. Parking is also available on the street.

The Luthy Memorial Botanical Garden is a short walk away. After exiting the zoo turn right on the sidewalk and follow it to the garden fence, turn right again to reach the garden entrance. The conservatory is accessible. The main garden paths are paved and accessible. Other paths are grass or woodchip. Wheelchair users may need assistance. 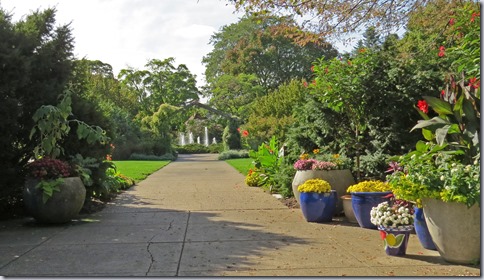