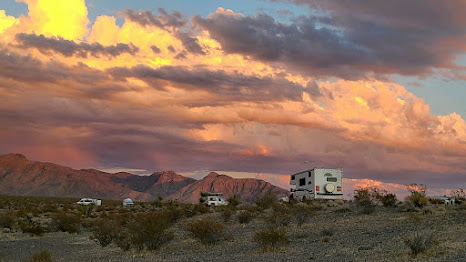 Until the vaccine has been given to almost everyone we’ll be following the guidelines that have kept us healthy so far. That means staying semi-isolated in southern Arizona until the weather warms up enough to move north to Nevada – basically a repeat of last winter and spring so I probably won’t be posting often. We’re grateful for the beautiful sunsets, the nice weather, and our many nomadic friends who share camping spots but we’re really anxious for things to get back to some form of normalcy. Stay safe everyone! 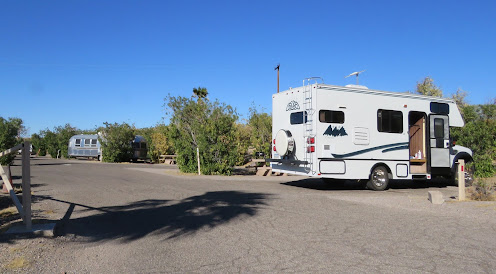 There are two campgrounds, North and South, for a total of 170 sites. We camped at South which is the larger one although most of the loops are closed this late in the year. Amenities include tables, fire rings, restrooms, and a dump station. Judging by the large parking lots for boaters and the size of the marina it looks like this is a busy place in the summer. Private RV parks and a motel are located nearby. 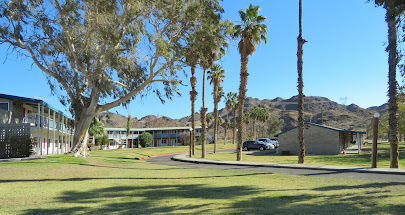 The sites in both campgrounds have paved parking pads that are fairly short so campers with long RVs may have trouble fitting into them. Most of the sites are sloped and leveling may be necessary. Two sites close to the restrooms are designated as accessible but, with the exception of the very sloped ones, most are usable. Campgrounds 35.22281, -114.55732 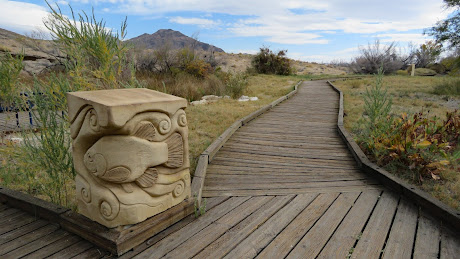 Water that entered the groundwater system thousands of years ago bubbles to the surface in thirty seeps and springs to create a wetland of over 23,000 acres. The refuge has been protected since 1984 but it was almost destroyed in the 1960s and 70s when a portion of land was drained and mined for peat; additional land was drained for hay and alfalfa farms; and plans were drawn up for a housing development. None of these activities and plans were sustainable for long – there is just not enough water. 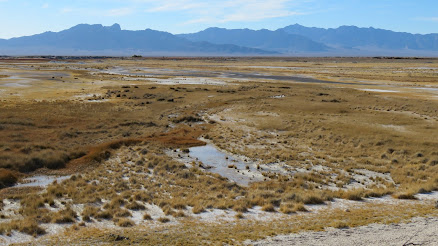 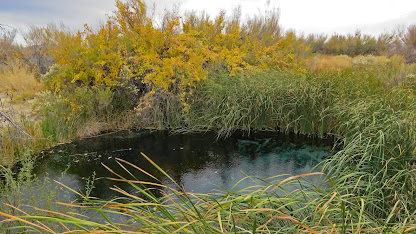 The refuge has a visitor center (closed due to conronavirus), three short boardwalk trails, and five roads that are closed to traffic but open for hiking. The best times to see wildlife and unique plants are in spring and fall. Since we visited in the winter the wildlife was scarce but the refuge was still very enjoyable. 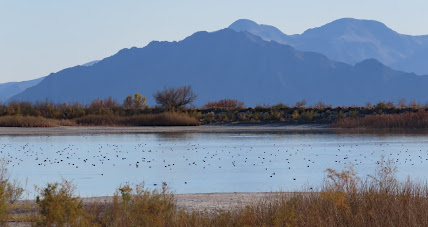 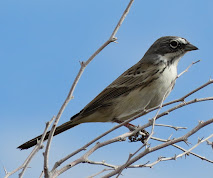 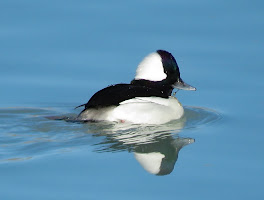 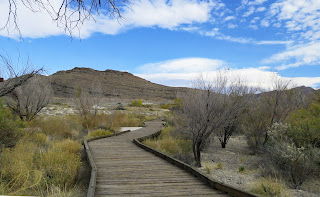 The visitor center appears to be accessible. All of the boardwalk trails are accessible. The closed roads at Crystal Reservoir and Rodger Spring are accessible with assistance. The Devils Hole area is not accessible due to rocky ground and steep, narrow trails.

The main roads are suitable for any vehicle but all of them are horrible washboard. The other roads get sloppy when it rains and have ruts. Parking is limited at Peterson Reservoir and DeviIs Hole. I recommend driving in one entrance and out the other to avoid having to go back over the same territory. We came in at the south entrance, saw the sights at that end of the refuge, then boondocked on BLM land outside of the refuge and saw the sites near the west entrance over the next two days.  Refuge  36.42376, -116.32818 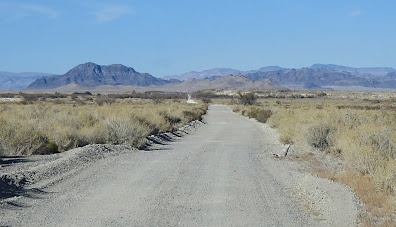 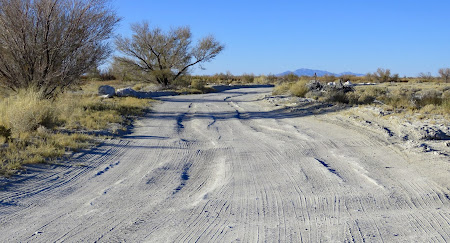 Also know as Poverty Flats. Ownership of the piece of land is in question. It’s not BLM land as many people assume. It may be Bureau of Reclamation due to it’s proximity to Lake Mead but the most realist possibility is that it’s private land owned by the Simplot Company which has a silica plant a few miles north. As long as the campers don’t cause any problems Simplot welcomes them to stay. Some people stay for several months in the winter.

There are two separate areas. One is up on the mesa with sweeping views of the highway, mountains, and the town of Overton. The other is a large flat area that looks like the preferred spot for people with long RVs but the slight hill to the mesa top should be doable with most RVs. This place is huge and I can’t imagine that it ever gets to the point of feeling crowded. Snowbird Mesa   36.48502, -114.44556 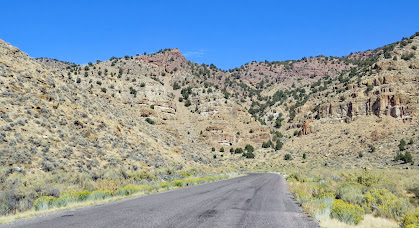 Millions of years ago, before the North American Plate was forced upwards by a collision with the Pacific oceanic plate, this was a swampy lowland where dinosaurs roamed. Their tracks were buried under layers of rock until erosion, by water and wind, carved a three mile pass through the hills and exposed some of the tracks. There are other cool rocks too. 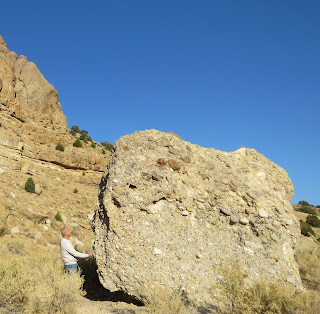 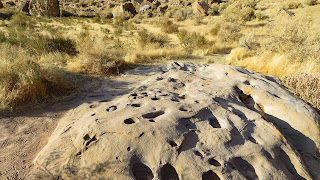 A short trail wanders through the rock formations to several tracks. They’re a little hard to spot, in fact, we missed all of them on the trip out but found a lot of them on the way back. Look for the metal dinosaur tracks on poles that mark the easiest to view tracks. 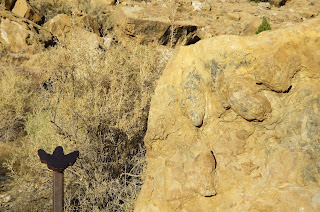 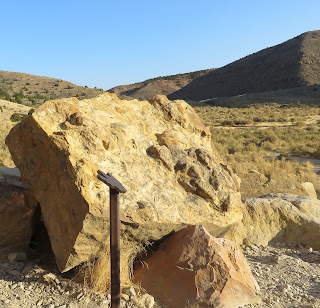 The trail is hard packed sand but due to some soft areas wheelchair users may need assistance. 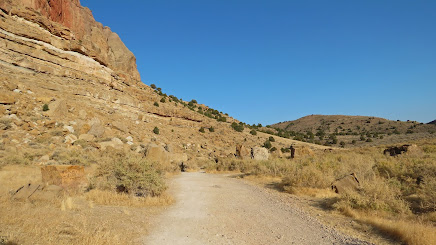 Parowan Gap Petroglyphs site is located two miles west of the dinosaur tracks and features vault toilets, picnic tables, interpretive signs and a paved walkway leading to good views of the petroglyphs. Everything is accessible. 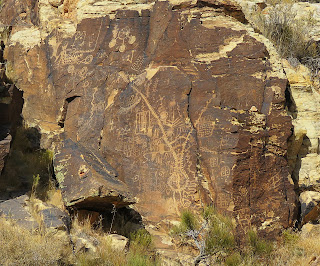 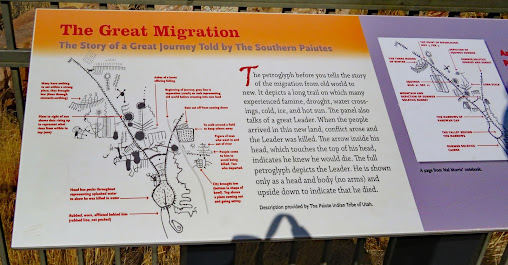 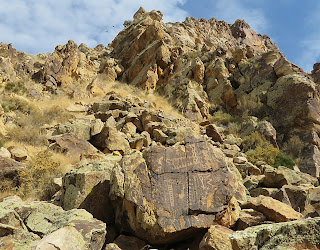 We boondocked near the dinosaur tracks but I recommend exploring some of the dirt roads branching off of Gap Road for larger, more private spots. Gap  37.89675, -112.95161 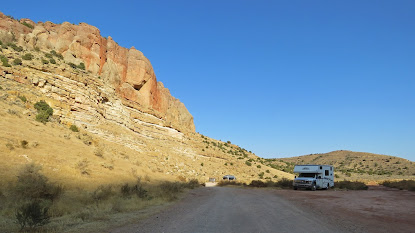 A large, flat, and easy to access clearing makes this an ideal campsite for a quick stop. Multiple fire rings and an absence of vegetation attests to it’s popularity so it might be a good idea to explore farther along the road for longer stays. Some of the surrounding land is private. Make sure that you are on public land - Forest Map  38.9091, -111.73215

Across Utah on Interstate 70 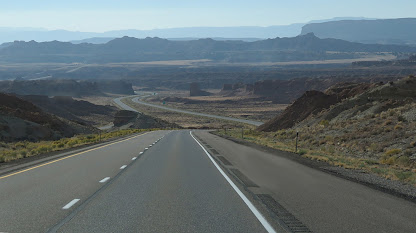 I avoid interstate highways as much as possible but sometimes I wonder how much beautiful scenery we’re missing by doing that. We’ve driven west from Denver on I-70 and that drive is spectacular but I don’t remember ever going through Utah on I-70. There are no towns or services for over 100 miles between Green River, Utah and Salina, Utah making this stretch of interstate one of the least populated in the country. Check your gas tank before starting. We filled up in Green River which is famous for it’s melons – something about the hot days, cool nights, and sandy soil. The watermelon that we bought was just the right combination of sweetness and juiciness. 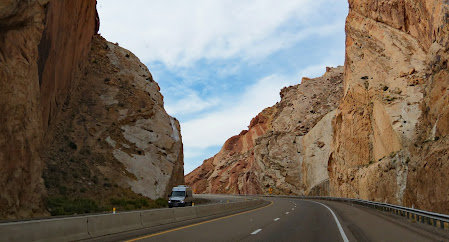 There are a number of exits to view points with small parking lots. The land along the interstate is almost all BLM land so if you can find a good dirt road dispersed camping should be easy. We saw campers in the distance all along the route. This is a place that merits more exploring on another trip. I-70  38.94194, -109.82163

Email ThisBlogThis!Share to TwitterShare to FacebookShare to Pinterest
Labels: UTAH 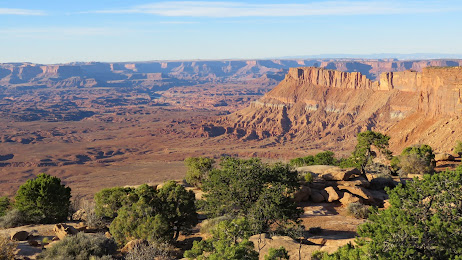 Drive seventeen miles west on narrow Canyon Rims Road until it ends at a small parking lot. Spread out far below is all of Canyonlands National Park, a view that most  people don’t see because of the remote location. There is a short paved trail with two overlooks and two dirt trails. The paved trail is accessible but the view from one overlook is partly blocked by the interpretive sign, the other is blocked by railings and concrete that ends a little too soon so it’s not possible to pull up close to the railing. One of the dirt trails is accessible with assistance, the other is too rocky. 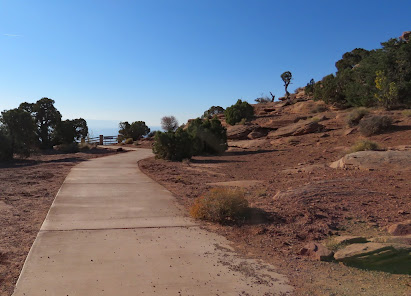 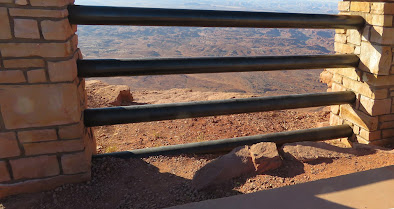 The views are best with the late afternoon sun because of haziness in the morning.

This is all BLM land and designated as a “recreation management area”.  I can’t find an explanation for that but it seems to pertain to OHV riding. There are many dirt roads and also many signs prohibiting riding cross country or riding near the overlook area. There are signs prohibiting camping near the overlook area too. We found a large flat spot that had obviously been used before about 4 miles before the overlook area and a few hundred feet from a sign that said “Camping Prohibited Beyond This Point”. There’s also a BLM campground called Windwhistle located on Canyon Rims Road, about 6 miles west from US 191.

Canyon Rims Road is paved the entire way and suitable for any RV. The sites in the campground are large enough for any RV. The overlook area has parking along the side where RVs will fit. Overlook  38.25988, -109.69597