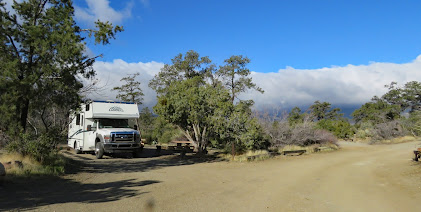 The campground loop features eighteen sites tucked among the pines. Most of the sites are very narrow and uneven but Site 3 is great - wide and easy to back into. It was in use when we visited and we found many of the other sites were very difficult to access even with our short RV. The loop road may be in rough shape so use caution with low clearance vehicles. 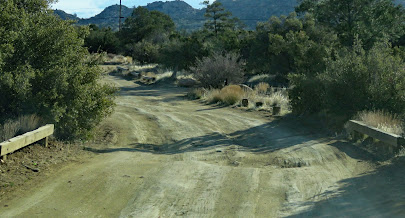 All of the sites have accessible tables and high fire rings but most are not accessible because the parking pads are so narrow. Site 3 would work plus there is one site that is ADA compliant even though it isn’t designated as such. It has a paved parking pad that is wide enough to deploy a lift. A paved path provides access to the vault toilets and the picnic table. Paving extends under the table and grill. We did not use this site because it was shady and we wanted to be in the sun. Campground  33.58428, -116.45744 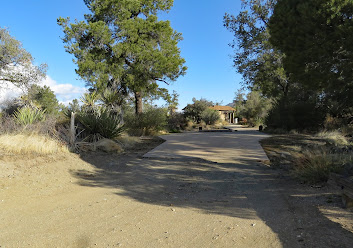 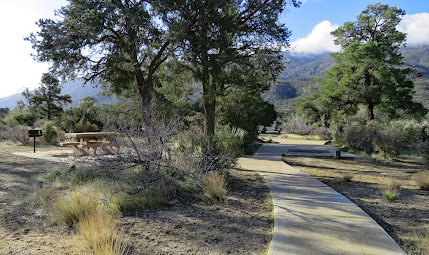 For the most part Route S2 follows the old Butterfield Stage Route along the western edge of the park. It’s about 35 miles long with many opportunities to hike or explore the intersecting dirt roads. We stayed on the paved road for a scenic drive through varying terrain with nice boondocking spots at the beginning and end. 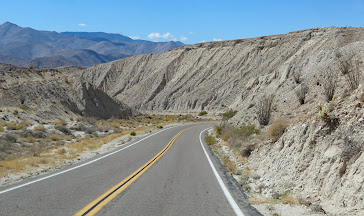 Dispersed camping is permitted along any dirt road but you must stay at least one vehicle length away from the road. Our first boondocking spot was off of a short, unmarked, dirt road that loops beside Route S2. Our campsite was close to the paved road but there are 4 or 5 sites on the edge of a cliff with great views of the Carrizo Badlands. Small RVs only!. The Badlands are composed of sandy and silty sediments deposited over millions of years by the Colorado River with fossils of extinct mammals, marine animals, and hundreds of plants buried in the many layers. Badlands  32.827, -116.16566 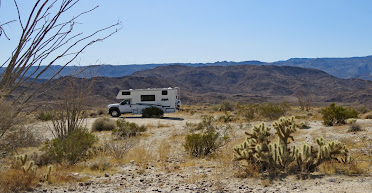 Although we didn’t camp at Blair Valley we did stop to check out the free camping. Camping is restricted to an area close to the entrance and along the dirt roads on either side of the dry lake bed. No camping on the lake bed itself. We drove a short distance along the road by the base of the hills where the campsites were close to the road and busy. The road goes for a couple of miles so camping may be better farther in. The road is rough in spots. Blair Valley  33.03827, -116.40908

Our last camping spot was in a large dirt parking lot for the Pacific Crest Trail. The north end of the lot has a nice little spur off of the main lot and is surrounded by desert plants. Pacific Crest Trailhead  33.10185, -116.47478 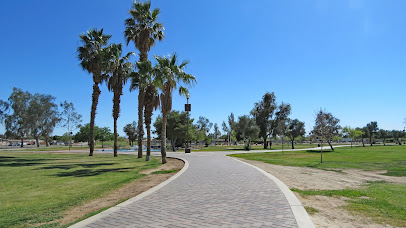 A 3/4 mile paved trail loops through this small, community park which features picnic shelters, a playground, a pond, and restrooms. It’s well cared for and popular with local residents.

This is one of the few places in El Centro that isn’t flat. Small hills were created with the soil that was removed to construct the pond. They’re not steep but some wheelchair users may need assistance. 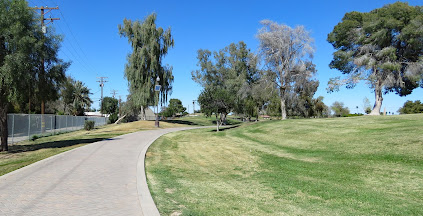 M. Penn Phillips made a fortune as a real estate developer, however, Salton City was not one of his successes. The subdivision of 12,000 residential lots with water, sewer, and power was promoted as the “Salton Riviera" and attracted a lot of attention when it opened in 1958. Plans included schools, churches, parks, community services, a championship 18-hole golf course, a $500,000 luxury hotel, yacht club, and the largest marina in California. Most of the buyers were speculators and the isolation, lack of jobs, flooding, and rising salinity in the lake added to the lack of interest in actually living in the city.  80% of the lots are still undeveloped.

I couldn’t find any information on the RV park so I don’t know if it was a city park or a private park but nobody cares if people boondock in the old park or on the beach. We choose the park but as long as you’re careful and avoid loose sand it’s possible to camp on the beach. People do get stuck so walk it first if you’re unsure. 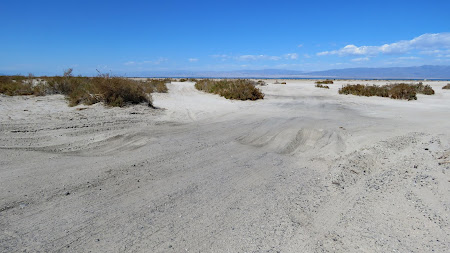 Water from springs feed a wetlands oasis where hundreds of palm trees and warm pools provide habit for birds, plants, and animals. It looks like a very cool place but unfortunately we could only view it from an overlook because there isn’t any wheelchair access. 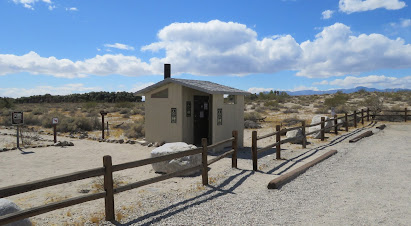 The main parking lot where the trail to the oasis starts is surrounded by a fence and the opening is too narrow for wheelchair access. The only other access point is chained off. We could have ducked under the chain but we couldn’t navigate around or move the large rocks. 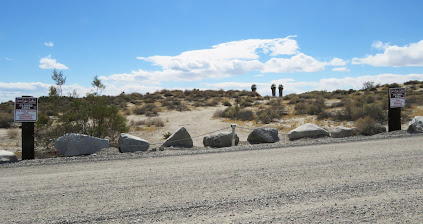 Salton Sea State Recreation Area (originally Salton Sea State Park) was established in 1955 and runs along the northeast side of the sea for about 15 miles and has five campgrounds. During the 1950s and 60s fishing was fantastic but as the water level dropped only the  fish that could adapt to the increasing salinity survived. The boat launches and fishing piers were left high and dry. New Camp was almost empty when we visited.

New Camp has two sections, 14 full hookups sites lined up side by side at the end of an asphalt lot, and a loop with non-hookup sites. The sites in the loop are a little unusual because all vehicle parking is along the road. The spaces are about 40’ long so this campground is not designed for large RVs with tow or towed vehicle. Amenities include shade shelters over the picnic tables, restrooms, showers, fresh water, and a dump station. 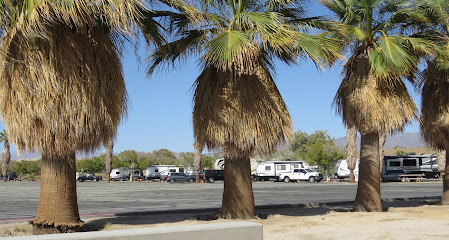 The campground is only a few hundred feet from a busy highway and railroad so it’s noisy. We probably would not stay here again due to the noise.

All of the sites have accessible tables and high fire rings but only the one designated as accessible has a curb cut. The parking spot is short however parking across the spaces would work if you have a long RV. The short, accessible nature trail is paved and makes a half mile loop. The visitor center was closed during our visit but it is accessible. Camping 33.50167, -115.9114

During the 1950s and 1960s the Sultan Sea was the place to be for summer fun of sports fishing, boat racing, water skiing, and swimming.  Bombay Beach’s vacation cottages and trailer parks were filled every weekend until the floods of 1976 and 1977 destroyed half of the town. A dike was built to protect the rest of the town from future floods but declining water levels, increased salinity, and pollution from agricultural runoff contributed to town’s demise. 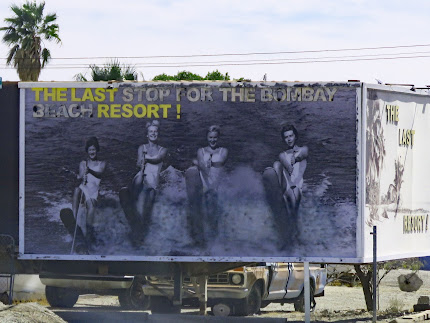 Today just few hundred people live in Bombay Beach and most of the buildings are empty however a group of artists is attempting to bring some life back to the town. 2016 was the first year of the Bombay Beach Biennale, a weekend of art and entertainment. There has been a festival every year except for 2020 when coronavirus forced a postponement. Many of the art installations are permanent and visitors are welcome.

We spent an afternoon wandering around looking at all of the creations. There are three different areas – the beach between the dike and the sea where the jagged studs of buildings are still visible half buried in sand; the Bombay Beach Estates, a cluster of abandoned cottages and trailers that serve as large canvases; and isolated artwork in vacant lots and the yards of residents.

Avenue A provides the best access over the dike and onto the beach. It’s possible to drive on the beach if the street is not blocked off. Stay on the trafficked lanes to avoid getting stuck. We parked along the street and walked/rolled to see the art. Most wheelchair users will need assistance. 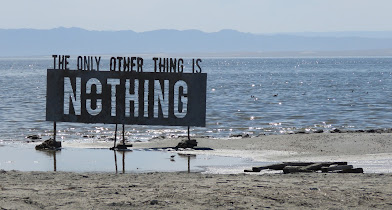 Bombay Beach Estates is gated to prevent vehicle traffic but foot traffic is okay. Caution is required due to the amount of rubble and deteriorating structures. 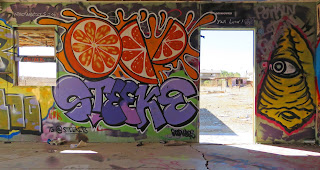 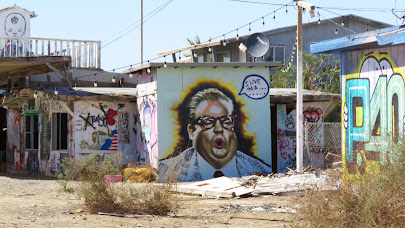 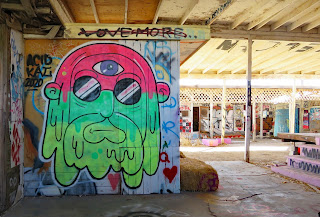 The streets are lightly trafficked so walking/rolling down them is fine. All of the art installations along the streets can be viewed from your vehicle.  Art  33.34878, -115.73295 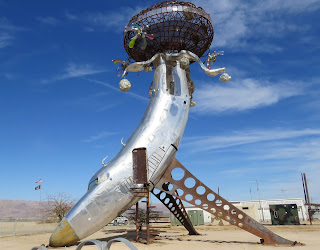 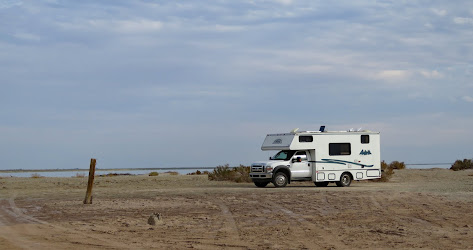 The declining water level is one of the problems of the Salton Sea but in 1976 and 1977 the problem was too much water. Tropical storms flooded the agricultural towns north of the lake. When the water flowed into the lake the lake shore towns of the Salton Sea were inundated - another blow to the area that was already suffering from a decrease in tourism and declining property values. 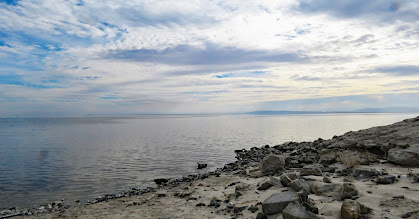 All that’s left of this county park are a few abandoned buildings but I think before the flood there was a campground, picnic areas, and a marina. The ground is very loose sandy soil so use caution. Only a few areas are firm enough for camping. We stayed close to the buildings but people do drive down on the beach. I recommend walking first to check the conditions. 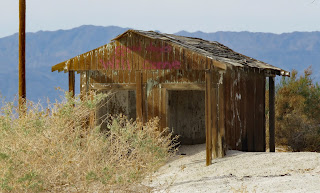 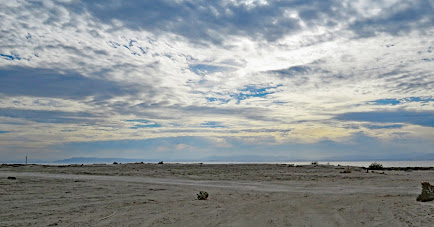