The best sites at this little free campground are the four or five at the end of the finger of land that extends into a backwater channel of the Missouri River. The rest of the sites are lined up in a row in full sunlight. Amenities include picnic tables, fire rings, a boat ramp and a vault toilet. 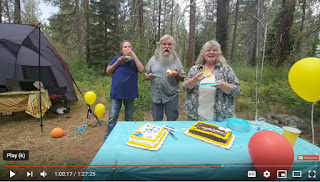 Home on Wheels Alliance was established just a year ago and has already done a lot for nomads who hit a rough spot and need some help and encouragement. The biggest project, the minivan giveaway, has been in the works for a while. After all of the time spent searching for the right van, building the interior into a compact home, and gathering information on the applicants, it was finally time to give the van away!  On August 28th the keys were turned over to Jolynn, a very deserving recipient, and everyone joined in the party. We couldn’t be there but it was recorded live on YouTube. 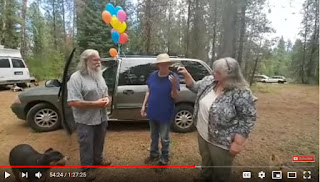 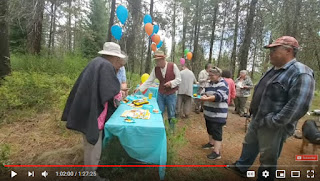 HOWA volunteers will be building out several minivans in Pahrump, Arizona this fall. Volunteers and anyone who wants to apply for a minivan can find the information here: HOWA
at 8:12 PM No comments: 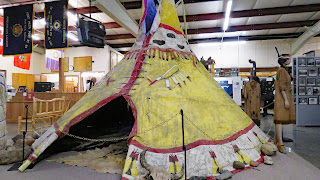 Along with the typical donations from local families, the museum also has a collection of items purchased from Joshua Wetsit, a chief of the Assiniboine tribe which includes a rare elk hide teepee.  Other exhibits cover ranching, farming, trophy hunting, the construction of Fort Peck dam, railroads, and different aspects of early settlers lives. One unusual exhibit tells the story of a local man and his wife who survived the sinking of the Titanic. 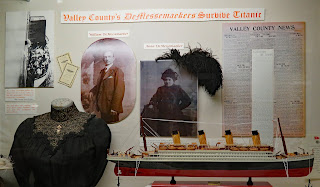 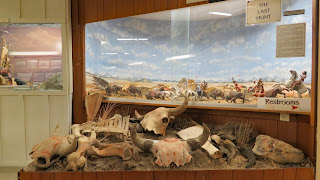 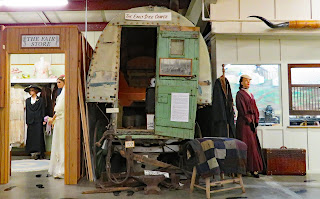 In the annex building a small scale 1915 street has been created complete with architectural details from buildings in neighboring towns. A restored 1924 Sears catalog home is located on the museum grounds and the machine yard across the street displays old tractors, plows, balers, sprayers, windmills, trucks, train cars, and other equipment.

Most of the exhibits in the main museum are accessible. The Sears home is not accessible due to steps. The annex building is accessible. It’s kept locked so an employee must accompany visitors and can help with the entry door. The machine yard has many obstacles – the boardwalks do not meet flush with the paved walkways, there’s a high threshold at the covered shed, and the homesteader’s house has a step so it’s not possible to peek in the window.

Buck Samuelson found a way to fill those long, cold Montana winters by building huge metal animals. They’re for sale if a giant animal is just what you need to add to interest to your landscaping. ;-) 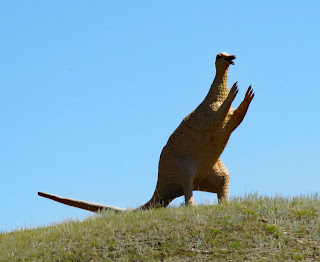 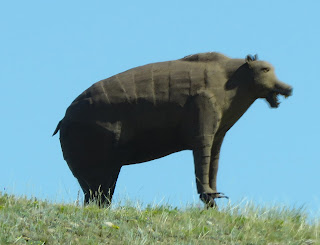 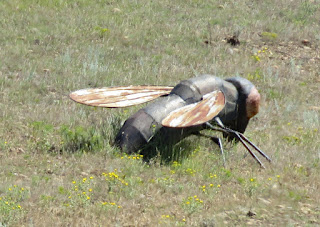 The sculptures are on a hill in a fenced in field so it’s not possible to get very close to them.  Pull off the road either into the Samuelson’s driveway or onto the dirt road on the opposite side of US 2 to get a better look.  48.23691, -106.67928 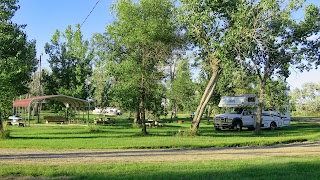 Located on the flood plain of the Milk River, this is a very pretty area with tall trees and a choice of spots in the grass or along the riverbank. The park is a little rough around the edges and could use some maintenance. There’s a shelter, picnic tables, fire rings, trash cans, and a vault toilet. We did not see any rules for day use or camping but spent the night undisturbed.  Any RV will fit in the park. Park 48.39691, -107.08379

Some of the world’s best preserved fossils have been found in Montana and a few of them are on display in this museum along with fossils from other areas. The museum is small, basically one room, so it doesn’t take long to see it. 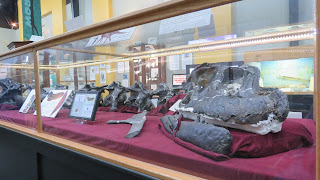 The parking lot is shared by the Phillips County Museum which was closed on the day we visited. There’s also a entrance to the Trafton Trail, a short trail, half a mile one way, along the Milk River. 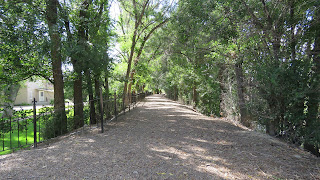 The museum is accessible but the push button doors haven’t been working right for a while.

The trail is level and shady. It’s surfaced with gravel and is rough in places so wheelchair users may need assistance. 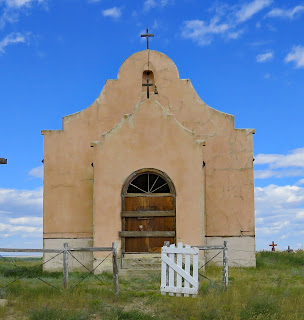 This pretty little stucco church that looks like it belongs in southern California Spanish mission sits high on a hill above the rolling plains of northern Montana. It’s part of the Fort Belknap Indian Reservation and even though the church is abandoned and boarded up the cemetery is still in use.

I searched for over an hour and found very little information so I don’t know when it was built or when it was boarded up but I think it may have been founded by the Jesuits.  It’s known as the pink church by locals. 48.44857, -108.65872

I often use Free Campsites to find good places to stay especially for just one night. I always read the reviews which I find informative and usually accurate so I knew what to expect from this little city park. Still it was a little strange to be parked right in the middle of a neighborhood. The pool wasn’t open so we stayed in the small lot next to the grassy biker camping area where there’s a portable toilet, a table, and a grill. We spent a quiet night with no sign of curiosity from the anyone. Park  48.53234, -108.7859 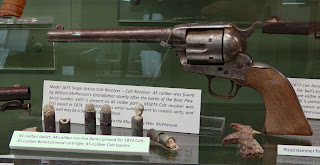 If you’re planning on visiting the Bear Paw Battlefield stop at the museum first to watch the video about the battlefield. The museum also has good exhibits on the local history which includes dinosaurs, Native Americans, ranchers, and homesteaders. 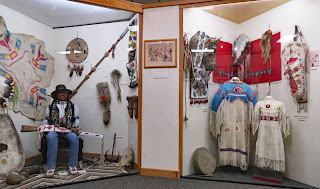 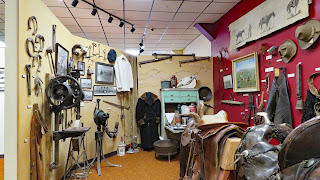 The main floor of the museum is accessible. The basement level has steps and no elevator.

The battlefield is about fifteen miles south of the museum. This is  where Chief Joseph of the Nez Perce tribe surrendered to the US army and stated "From where the sun now stands, I will fight no more forever.", thus ending a 1,200 mile, four month flight from Idaho to Bear Paw which was just 40 miles south of their goal in Canada. 800 people started on the journey but only 431 were left to surrender due to death from battles, disease and exposure, or because they managed to escape and enter Canadian territory. Most of the Nez Perce who made it to Canada found that it was too cold and inhospitable, forcing them to come back to the US and live on the Idaho reservation.

The battlefield is so peaceful that’s it’s hard to imagine the tragic scene of 142 years ago. A few interpretive panels explain the reasons the Nez Perce left Idaho and the battle that took place on the prairie bluffs and creek bottomland of Bear Paw. A 1 1/4 mile interpretive trail makes a loop through the battlefield.

The ground around the interpretive signs is very uneven and lumpy making wheelchair access difficult. The signs are too far from the road to be read without leaving your vehicle. The trail is mowed grass and hilly so it is not accessible. 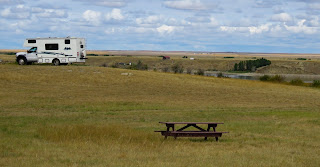 There are three areas along the shore of the reservoir where camping is permitted. We decided on Fresno Beach Day Use Area because the road from US 2 is paved. The day use area is large and has a flat, gravel lot for designated camping. The rest of the area seems to be open for camping too. With that in mind we drove to the top of a little hill and camped where we had a view of the reservoir.

There’s also a grassy tent camping area that is sloped but it has trees and is close to the lake. The area west of the designated camping area is crisscrossed with roads that should lead to nice spots near the water but the roads we saw looked very rough so we didn’t explore farther.

Museum of the Plains Indian

Photography is not permitted in this small museum which exhibits beautiful examples of artwork created by the Northern Plains Tribal peoples to decorate their clothing, household goods, and ceremonial objects. The methods and materials used are explained in great detail but the history of the tribes is a bit lacking.

The museum also sponsors exhibitions of contemporary artists. There’s a gift shop and local artists may be onsite giving demonstrations. A short video of the history of the Plains Indians runs continuously. It was made in 1970 and I thought the tone was a slightly patronizing.

Our stay at this campground was due to a lack of research on my part. Native American casinos almost always allow overnight RV parking so a knock at 11:00 at night as we sat in the parking lot of the Glacier Peak Casino was not what we expected. The campground is less than a mile from the parking lot so we settled in there for the night. Since all we did was sleep and use the dump station the next morning, I didn’t check out the campground. Campground 48.56252, -113.0291 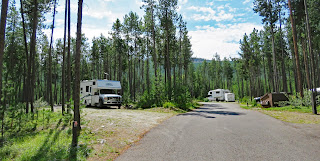 This small campground with good access to the lake is popular. It was most full when we pulled in late in the afternoon on a weekday. The sparse vegetation doesn't  supply much privacy but the sites are roomy. Amenities include tables, fire rings, vault toilets, potable water, and a boat ramp. 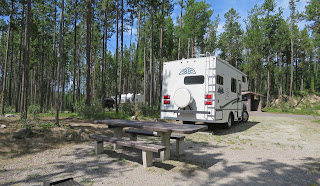