I’m really far behind on my blog so for now I’m jumping ahead to the RTR which was held from Jan 16th to the 23rd. The RTR was cancelled last year due to coronavirus but with the outside location and the ability to be vaccinated it was determined that we would all be relatively safe.

In 2020 the RTR was held at the La Paz County Fairgrounds which is pretty far away from most of the dispersed camping areas in Quartzsite, Arizona. This year the city officials in Quartzsite agreed to rent the town park to HOWA for the RTR. It worked out well – lots of parking for all types of vehicles, a large grassy field for seminars, and near by dispersed camping. Best of all, we made such a good impression that we are invited back next year! 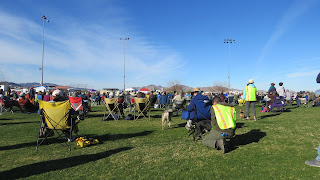 The location is better for people with mobility issues than any of the previous locations. The baseball field has hard packed dirt along the edges that makes rolling easy. There’s plenty of room for accessible parking and the lot is fairly level and hard packed.

Bob Wells recently bought an ambulance to use as his home on wheels and donated his van which was on display at the RTR. A sweepstakes drawing will be held on Feb 2. The ticket sales have generated over $80,000 for Homes on Wheels Alliance! 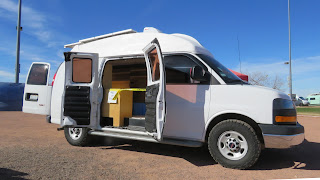 Once again I manned the HOWA booth which also became somewhat of a hangout spot for volunteers and staff. :- ) 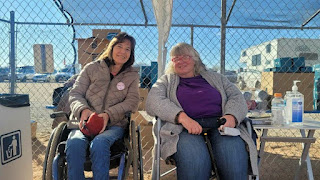 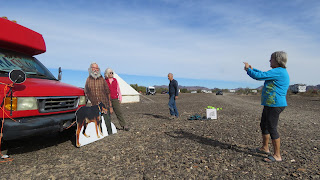 More beach camping! This beach is a bit more restricted. The little town of Surfside Beach may have a fee for beach camping so when you turn onto the beach at the public beach signs make a left to stay in the free camping section. Camping is limited to 14 days. Trash cans and porta-potties are available. 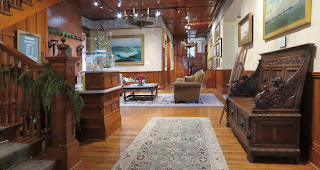 The beautiful building that houses the museum started it’s life in 1885 as a orphanage. In 1987 Ross Dinyari bought the abandoned orphanage  and renovated it to use as his private residence however when he married, his wife wanted to live elsewhere so the building was bought by J.P. Bryan with the intention of creating a museum. 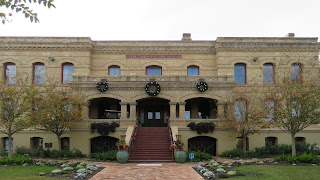 The museum exhibits briefly cover the early history of Texas with and emphasis on local history. Many artifacts fill the display cases and a very elaborate diorama with 2000 tiny figures depicts the Battle of San Jacinto. There’s also an area for children and beautifully landscaped grounds. 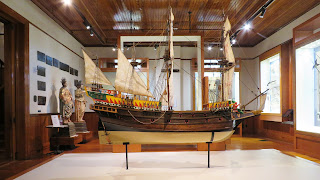 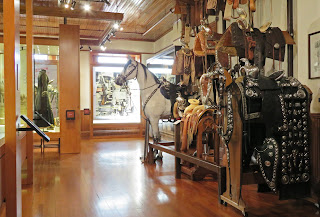 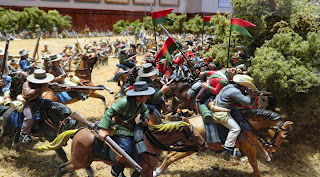 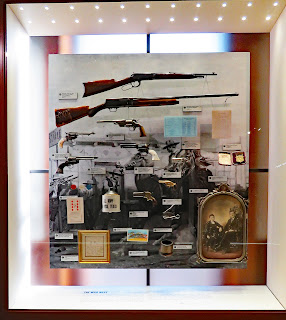 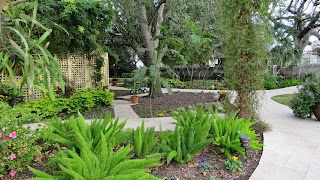 According to the Crystal Beach website camping is permitted along the entire 27 miles of Bolivar Peninsula. Of course that doesn’t mean it’s possible to camp everywhere because storms and tides can change everything. A parking pass, which can be purchased at most area stores, is required. It’s only ten dollars and good for the whole year. There seems to be no limit on the number of days you can camp on the beach. 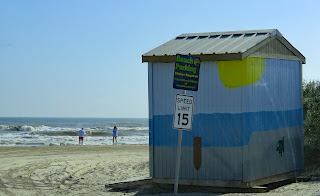 We took the easy route down one of the many roads at Crystal Beach that lead to the sand road. This area was hit hard by Hurricane Ike in Sept 2008 but it’s been built back up and we were camping right in front of expensive beachfront homes. If we had been staying longer we would have driven to a less populated section of beach. All of the stores were sold out of passes and hadn’t received the new ones so our stay was free. View from our door. 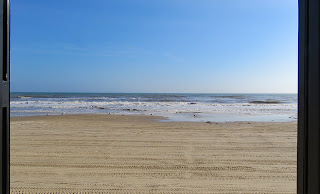 People driving on the beach stir up the sand too much for easy wheelchair rolling but it’s fine for driving on with any vehicle. Beach 29.4527, -94.63009

Continuing on our coastal journey we passed by an enormous amount of damage caused by Hurricane Laura in August of 2020. Very few houses are salvageable and most of the properties are deserted. The people who came back are living in trailers and RVs. 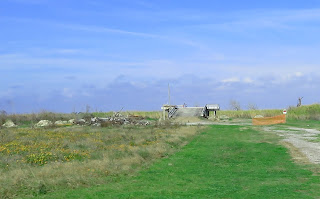 At the border of Louisiana, the road continuing into Texas was washed out in 1989 by Hurricane Jerry so we took the little ferry across Sabine River, detoured north through Port Arthur, went west on I-10, and got off at Hwy 124 to go south to the coast and tiny town of High Island.

The remnants of Hwy 87 are scattered all along the beach at High Island. Sections of the concrete seawall are jutting out of the water. With all of the debris this is not a good beach for swimming or wading, however camping is permitted the entire way east to Sea Rim State Park. We camped on the beach close to the parking lots and walked/rolled about 300 yards east which is about as far as it was safe to drive. Conditions change often on beach roads so it’s best to walk the area before driving to avoid getting stuck in the sand.

The sand was hard packed and easy to roll along.

We’ve always been a little worried about beach camping but since we were traveling along the Gulf Coast, it was time to give it a try! Free or almost free beach campsites dot the coast from Rutherford, Louisiana to the Texas/Mexico border. We were only going slightly west of Galveston but managed to camp at four different beaches along the way.

Rutherford Beach has suffered damage from recent hurricanes so the parking lot and shelter are gone. There are porta-potties and dumpsters but nothing else. Apparently conditions on the beach vary a lot. When we visited it was possible to drive about a mile east but the sand on either side of the packed sand beach road got softer the farther we went. Most people camped where the parking lot had been located or along the first section of beach road. 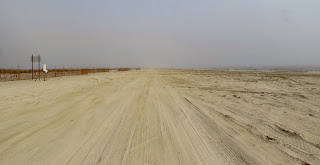 We camped in the first section about 75’ from the water with a nice window view. A breakwater keeps the waves down in this section. The entire beach at the high tide mark is covered with perfect little seashells - the kind that we hunt for but don’t often find on the Atlantic beaches. 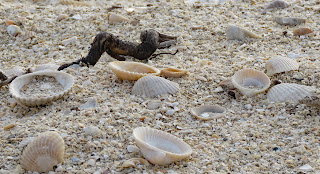 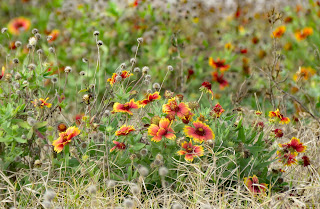 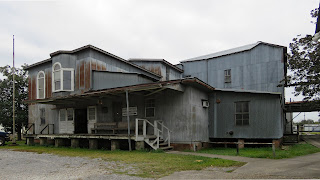 The Conrad Rice Mill, founded by P.A. Conrad in 1912, is the oldest rice mill in America. The Conrad family ran the mill until the sons retired in 1973. In 1975 Mike Davis bought the mill and the company now makes 43 Verified NON GMO, Wheat and Gluten Free and Star K kosher certified products.

.We found the tour a bit of a strange experience. The tour starts at the company store with a short slide show of Cajun history and the history of the mill, then moves on to a guided tour of the first floor of the mill. Nothing was running in the mill and it looks like nothing has run for quite a while. The machinery is dusty and battered causing us to wonder how the mill manages to pass food safety inspections. The tour ends in the store which is well stocked and clean 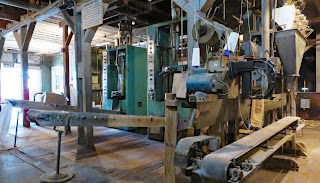 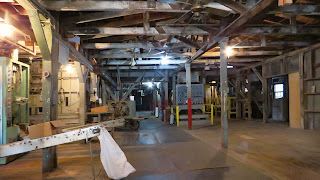 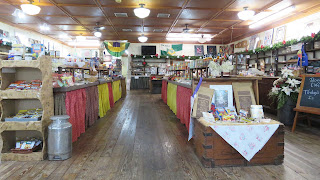 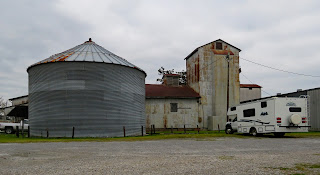 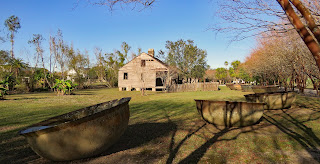 In 1752, Ambroise Heidel, a German Immigrant, purchased the plantation in Louisiana and became wealthy growing indigo. It was know as Habitation Haydel and remained in the family through four generations, although by the early 1800s the main crop was sugar cane. The last family member died just before the Civil War and the plantation received a new name in 1867 when Bradish Johnson bought the property and named it after his grandson, Harry Payne Whitney.

All of this information about the owners of the plantation is well documented but little is known about the people who did all of the work – the 100s of enslaved people from Africa. John Cummings, a New Orleans lawyer, set about to tell the story of slavery on the plantation after he bought the property in the late 1990s. There are more than a dozen River Road plantations that are open to tour and while some of them do touch on slavery Whitney is the only one focused solely on the enslaved people. 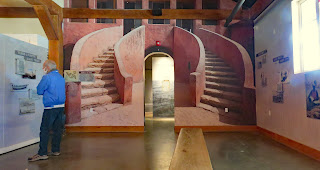 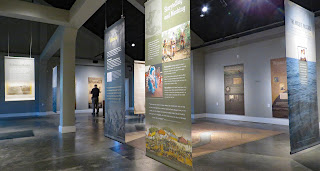 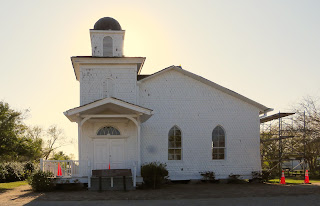 A large section of the property has been set aside for memorials with statues created by local artists. The Wall of Honor lists all of the slaves that lived, worked, and died on the plantation. The Field of Angels remembers the 2,200 enslaved children who died in St. John the Baptist Parish between the 1820s and the 1860s. Allees Gwendolyn Midlo Hall has the names of 107, 000 people enslaved in Louisiana along with quotes from the Slave Narratives Collection, part of the Federal Writers Project of the 1930s.  Tour are self guided so download a free tour from Google Play or Apple before going. 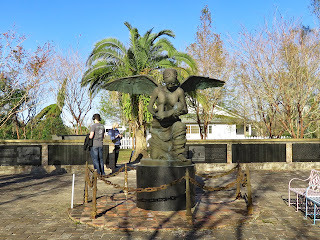 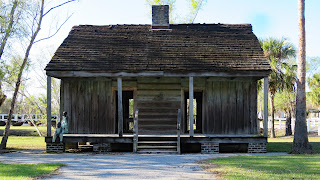 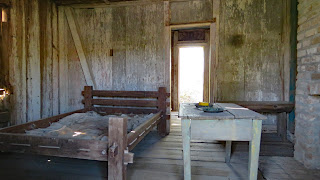 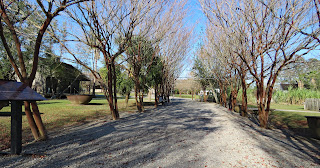 The parking lot is large enough for any vehicle. It is surfaced with large, loose gravel so park as close to the entrance as possible. Whitney 30.0395, -90.65191