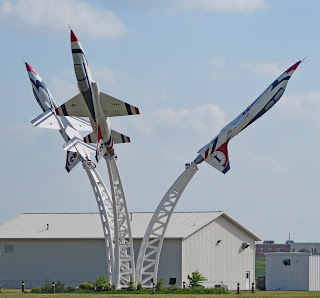 The statue of three jets used to stand outside the Heritage Halls Museum. When the museum closed the statue was moved to this small regional airport – a impressive sight at such a tiny airport!

Jesus on a White Stallion 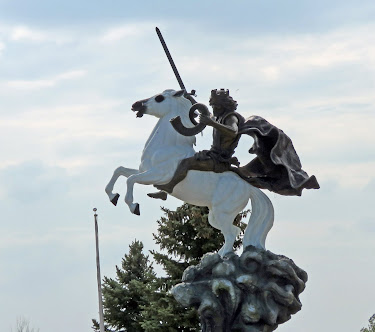 Most churches don’t have large statues at their front entrance, especially one as unusual as this one. An angry Jesus sits on a rearing stallion, holding a sword high in his right hand and a horn in his left hand ready to sound a call to battle. The artist has based the statue on his interpretation of verses in the book of Revelations. 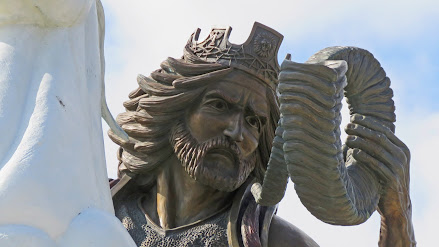 The statue can be seen without exiting your vehicle. 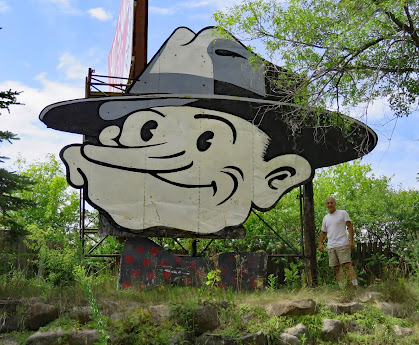 Antiques, junk, artistic creations – it’s all here and all for sale. Jake Hood and his mother Gladys, nicknamed Hot Sam, created the park in 1985 to showcase her antiques. Gladys has passed away and Hot Sam’s is now run by Jake and his friend, Kathy Sakry. 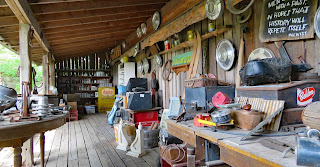 The more valuable and breakable antiques are located in buildings and box cars. The rest of the stuff is scattered around the property and is perfect to use as photo props. There is a charge for taking photos - $5.00 per person for mobile phones or $25.00 for digital cameras. We ran into Jake and he waived the fee, most likely to make up for the poor accessibility. 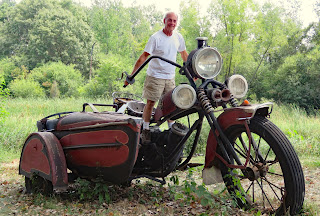 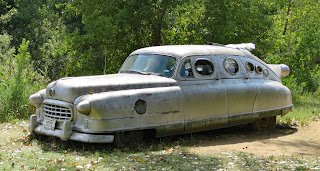 The buildings have ramps but they are not ADA compliant. The grounds are gravel and soft sand so some areas are very difficult to push through even with assistance. It’s possible to see most of the larger creations by driving along the road. 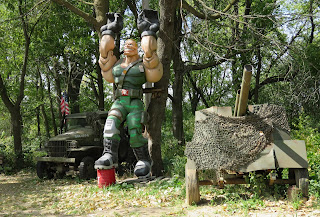 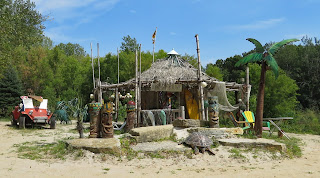 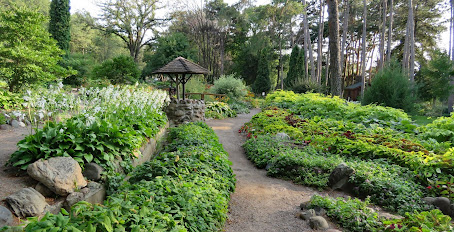 Munsinger Gardens were created in the 1930s as part of the Works Progress Administration (WPA) and Civilian Conservation Corps. (CCC) programs. The gardens, filled with a large variety of colorful flowers and plants, are extremely well maintained by dedicated volunteers. Tall trees shade winding paths that run for almost 1/2 mile along the Mississippi River. 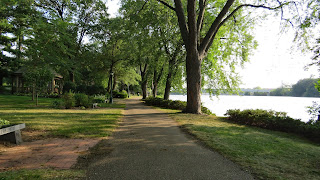 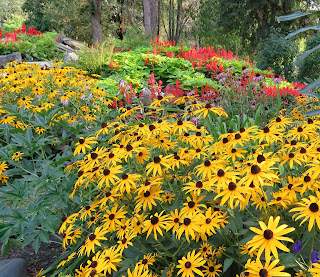 The paths are surfaced with gravel, asphalt, and flagstone. The ground slopes towards the river. Wheelchair users may need assistance due to the slope and the variety of path surfaces. Some paths are not accessible even with assistance. 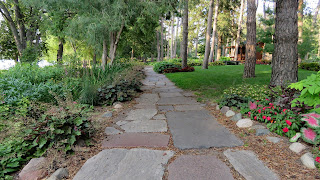 Clemens Gardens is much newer, started in 1990 on land donated by Bill Clemens who also funded the gardens. His wife, Virginia Clemens had multiple sclerosis and enjoyed frequent visits to the gardens. Clemens Gardens has a formal design with six separate garden areas. Several of the gardens have a monochromatic color scheme. 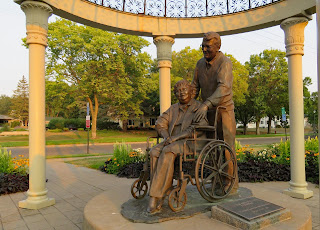 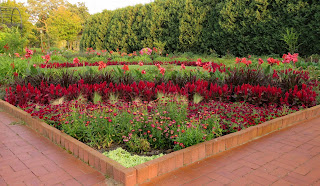 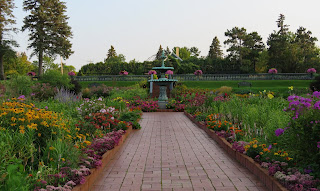 The gardens have several levels with steps but the paths on the outside edges are gently sloped and allow access to all levels. The paths are paved with brick for easy rolling. 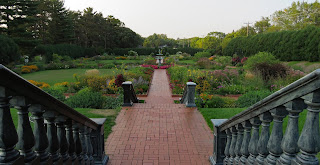 The gardens are on opposite sides of Riverside Drive. It’s possible to walk from one to the other but the path is up a steep hill so for easy accessible park on Riverside Drive or in the small lot at the south end of the garden to see Munsinger Gardens then drive one block east and park on Kilian Blvd to see Clemens Gardens. Gardens  45.55017, -94.14375 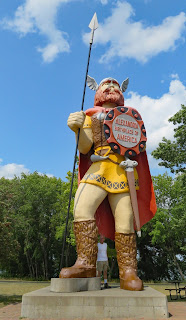 Big Ole was built in 1965 for the Minnesota display at the New York World’s Fair. After the fair he was trucked to Alexandria, Minnesota where he has welcomed visitors for more than 50 years.

He’s located in a small park one block north of the Runestone Museum. This is also a good spot to access the Central Lakes Trail. A paved path leds to the base of the statue. We did not go on the trail but it is paved and accessible. 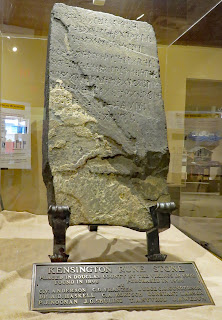 In 1898 Olof Öhman found a mysterious stone on his farm, buried in the roots of an aspen tree. Thus began the quest to translate the inscriptions on the stone and verify that the syntax and runes used are correct for a Viking artifact from the 1300s. This is still being debated today and the museum does a great job of providing evidence of the authenticity. Some facts may have been skipped over but there is a real possibility that the Vikings traveled west from their settlements in eastern North American. 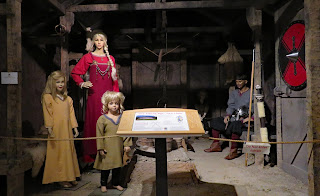 The museum has a small exhibit about the rune stone, a collection of Native American artifacts, and many items donated by Scandinavian settlers. In addition there are nine relocated buildings representing Fort Alexandria which was built in 1862 during the Dakota War. A large building houses a replica of a Viking ship and  donated agricultural items. 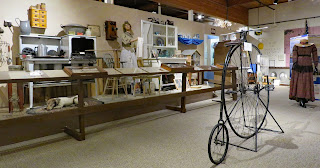 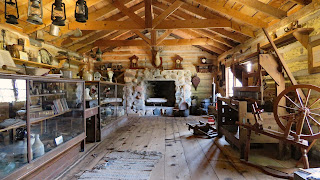 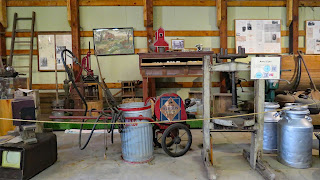 The museum is accessible. A paved path goes to all of the other  buildings. Some of the fort buildings have high thresholds. The ship replica building has a long ramp.

The museum is located in a turn-of-the-century building that was previously a warehouse for International Harvester. Modern, contemporary, regional, and Native American art are featured in 12 special exhibitions each year. It’s fairly small and can be seen in an hour or so. 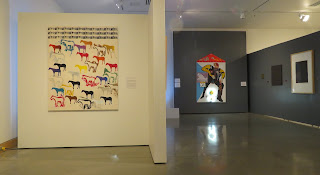 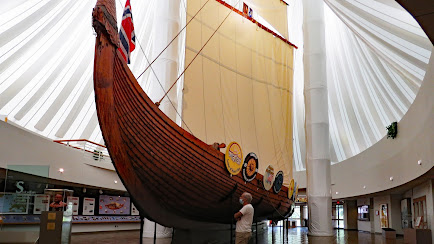 The story of the Hjemkomst, a Viking ship replica, is amazing. Robert Asp, a junior high school counselor, had a lifelong fascination with the voyages of the Vikings and dreamed of building a ship but it wasn’t until he fell off of a roof and was recuperating that he had time to plan. The first trees were felled and the first boards milled in 1972. The replica, patterned after the Gokstad a Viking burial ship unearthed near Sandefjord, Norway, was completed in 1980.

Asp worked alone in the early years but when he developed leukemia in 1974, a group of volunteers joined to help with the build. None of them had any experience in shipbuilding. After the ship was completed it was trucked two hundred miles to Lake Superior. When the ship slid into the lake Robert Asp was onboard but sadly he died in December of 1980. In May,1982, the ship with 12 crew members including four of Asp’s children, sailed through the Great Lakes to begin a somewhat perilous journey to Norway. The Hjemkomst arrived in Bergen, Norway on July 19, 1982 and the crew was greeted with celebrations all along the coast as they sailed to Oslo, Norway.

The center has exhibits and videos about building and sailing the ship. The center also includes galleries featuring changing exhibitions. 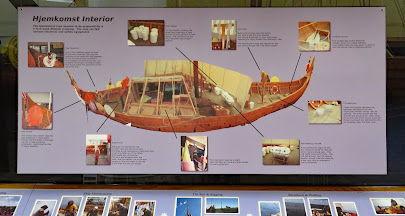 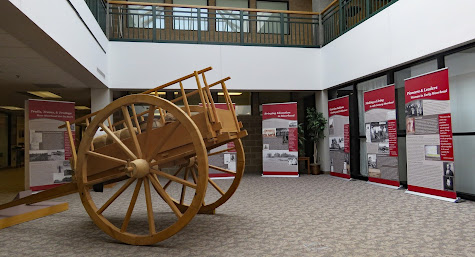 Another interesting replica is located outside. Gaylord “Guy” Paulson along with family and friends constructed an exact replica of the 900 year old Hopperstad Stave Church located near Vik, Norway. Stave churches were built when Christianity was new to the Norwegians and blend pagan and Christian elements. The church interior can be seen by guided tour only. 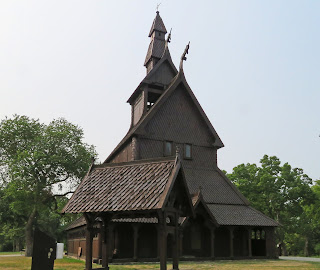 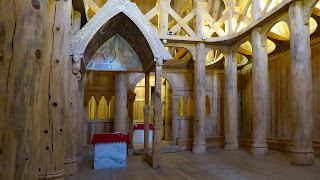 The center is accessible except for a balcony level overlooking the ship. The church has a ramp.

The Woodchipper used in Fargo Movie

When if first appeared in theaters the movie Fargo wasn’t very popular with the residents of Fargo, North Dakota due to it’s dark humor and the way it poked fun at their accents and customs. It was actually set and filmed in the Twin Cities area of Minnesota but none of that stopped the city of Fargo from embracing the movie to the point of buying the woodchipper from a crew member and putting it on display at the visitor center.

Now visitors have fun posing with the chipper and pretending to push a very unrealistic looking plastic leg into the chipper. Visitors are usually offered the use of another prop, a fur lined hat with ear flaps, but coronavirus put a stop to that for the time being. A small display case holds movie memorabilia. There’s another woodchipper outside that you can pose with if the visitor center is closed. 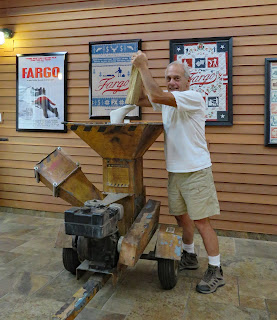 The visitor center is accessible.