Antoine de Vallombrosa, the French Marquis de Mores came to the Dakota Territory in 1883 with a plan to make a fortune in the cattle industry. He bought 44,000 acres of range land, built a slaughter house, and established a town with homes for employees, offices, a hotel, a general store, a brick plant, a school, a Catholic church, and a recreation hall. He thought he’d hit on a brilliant idea – to slaughter the cattle on site and pack the meat on ice in rail cars to be shipped to eastern markets rather than shipping them live by rail to the Chicago packinghouses.

The plan failed for many reasons - fierce competition from major Chicago-based packers, the devastating effects of drought and deep snow in 1886, and the Marquis’s inexperience in business.

The large summer house that the Marquis de Mores, built high on a hill overlooking the Little Missouri River valley and the town of Medora was called a chateau by the townspeople even though it more closely resembles a barracks. The Mores family enjoyed inviting their family and friends to the untamed west for hunting trips and to experience rough living in a  rustic setting. 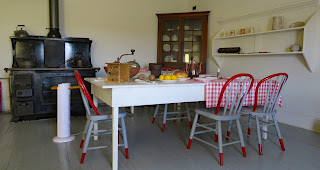 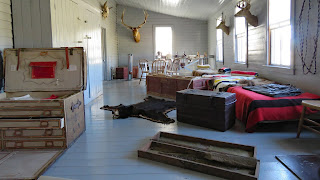 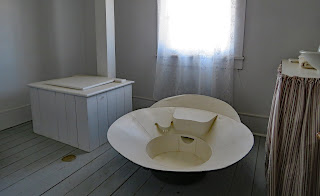 The family used the house for three summers from 1883 to 1886. After his cattle business failed the Marquis returned to France where he became  embroiled in political controversies and was murdered in 1889. The family visited the house once after the Marquis death.

In 1921 the eldest son gave the caretaker permission to run a boardinghouse in the chateau so even though it suffered from lack of upkeep the chateau survived while much of the town did not. The chateau was turned over to the state of North Dakota in 1936 on the condition that it be maintained and opened to the public. It was restored from 1937 to 1941 by the Civilian Conservation Corps. 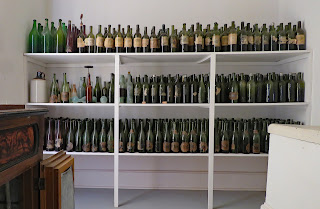 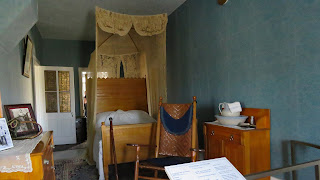 The site includes an interpretive center with exhibits on the Mores family and the Marquis’s cattle business. Exhibits about the Civilian Conservation Corps and Work Projects Administration fill a separate gallery. The chateau is opened for self tours with guides available to answer questions. 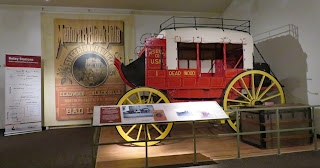 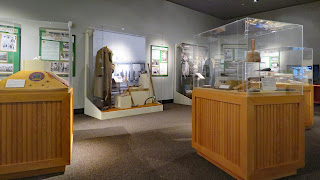 The interpretive center is accessible. The chateau has several difficult areas. The path from the parking lot is very steep and uneven. The thresholds at the chateau entry and exit doors, and between the rooms are very high. 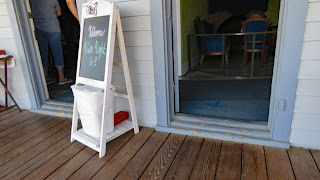 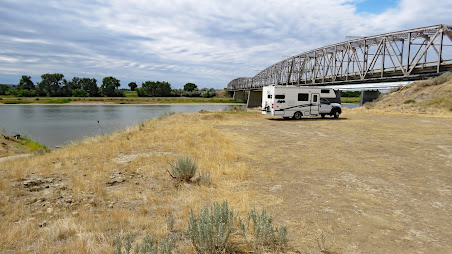 Fallon Bridge is less of the campground than the other fishing access sites where we recently camped. There aren’t tables, fire rings, or a vault toilet but it has a good boat ramp to the Yellowstone River which I imagine makes it a favorite spot for boaters. 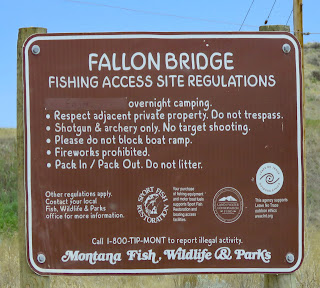 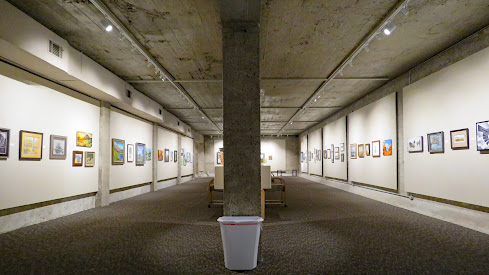 The museum is housed in a 1910 waterworks building. For over 60 years drinking water for Miles City was filtered and stored in the building which now serves as an interesting small museum featuring exhibits from the museum’s permanent collection and traveling exhibits.

The museum, located on the lower level of the building, is accessible. The upper level is not open to the public,

We stayed here in 2015 but I think we were in the day use area, not the campground. It didn’t matter because we didn’t see anyone the entire time we were there but this time we decided to stay in the campground loop. There are about seven sites around the loop and although there are a lot of trees the access to them is blocked by posts so it’s not possible to take advantage of the shade they provide. 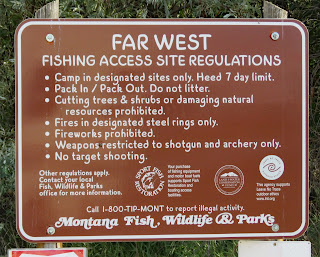 None of the sites are accessible and getting to the tables may be difficult due to the downhill slope from the loop road. 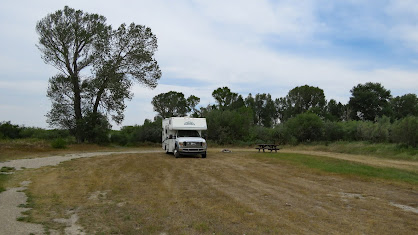 Montana has a lot of fishing access sites but finding the ones that permit camping and are free takes a bit of research. This handy map has links to the access sites but the title is misleading because not all of them have camping listed as an activity. 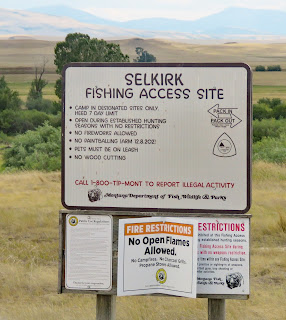 Selkirk has three camp areas - large mowed area in the center of the loop road, a grassy meadow area, and a gravel parking strip tucked into the brush. The two large areas are suitable for small groups. A short path behind our motorhome in the top photo leads to a shallow stream named the Musselshell River. :-D 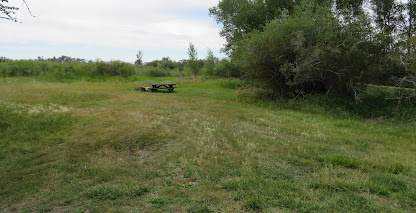 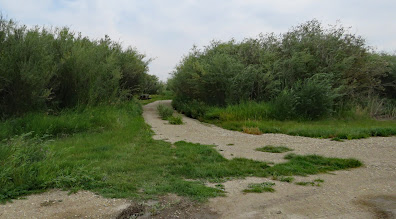 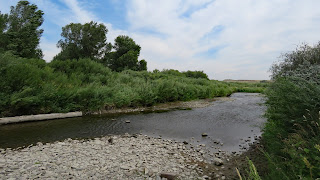 The mowed area is fairly accessible because the ground is hard packed. High grass in the other two campsites makes rolling around difficult. The path to the stream is not accessible. 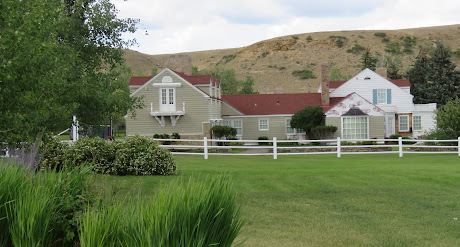 In 1898 Charles M. Bair left his wife, Mary, and their two young daughters in Montana while he traveled to the Yukon to sell his permafrost thawing invention to the gold miners. He may not have made much money from the invention but buying and selling gold claims made him wealthy enough to purchase a large ranch in Martinsdale, Montana. Investments in oil, mining, banking and real estate added to the family’s wealth and allowed Mary Bair and her daughters Marguerite and Alberta to amass a large collection of western paintings, Native American artwork, and antiques. 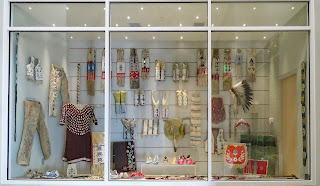 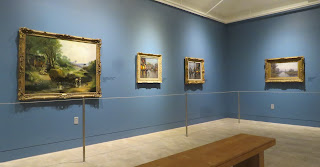 The two daughters lived in the house after their parents died and added to the collections, even remodeling the house with additional rooms to hold everything. Neither woman had children so they decided to leave the house and all of their collections to the state of Montana. Alberta, the last of the family, died in 1993 and the house was opened as the Bair Family Museum in 1996. The property is still a working sheep and cattle ranch. The family legacy includes a trust fund that pays for upkeep on the property, scholarships for local students, and grants to charities. 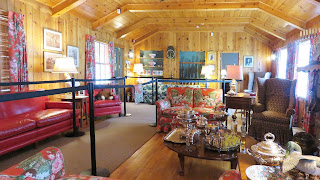 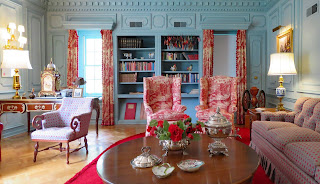 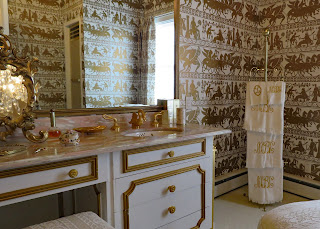 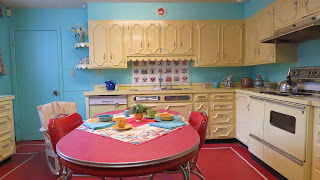 The site has a visitor center with a small museum housing some of the artwork, the stables with exhibits and a gift shop, and the house itself which is shown by tour only. 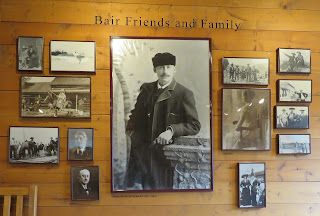 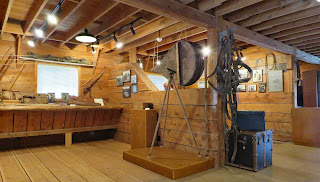 The museum, stables, and house are accessible. The second floor of the house is closed to visitors.

We came upon this campground nine years ago as we were meandering along US 12. It was too early to stop for the day so we just drove through and noted how nice it was for a free campground. It took us a while but we finally came this way again and this time we stopped. :-) 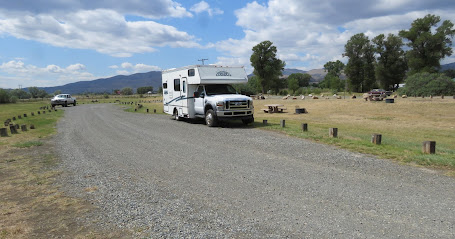 Ten campsites are located along the single loop road of the campground. One is an accessible (although not designated as such) pull-through site with a path to the vault toilet. Most of the other sites are usable with extended tops on the tables and high fire pits.

The campsite parking areas are all parallel to the road with posts blocking vehicles from driving onto the grassy campsites. Some may be too short for long RVs. Campground  46.33408, -111.52808 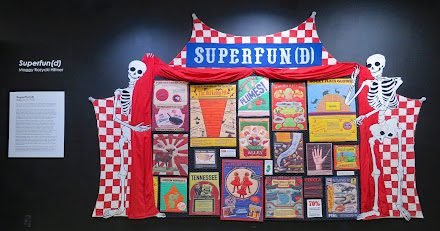 The museum has five galleries featuring contemporary art with an emphases on artists in the Pacific Northwest. Each year there are over twenty rotating exhibitions with selections from the permanent collection and additional art from regional artists. The exhibit when we visited focused on the extraction industry – the same subject as the Missoula Art Museum and just as thought provoking.

The museum does not have a parking lot but there’s plenty of on-street metered parking. East Lawrence Street where the museum is located is fairly steep so I recommend parking on Cruse Ave. The curb cuts are in good condition. Museum   46.59052, -112.03665

The five galleries in this small museum feature changing exhibits of artwork relevant to the region. During our visit the artwork focused on the environment with an emphasis on Berkeley Pit, a closed open pit copper mine that is now a super fund site, and the extraction industry in general. The museum is housed in a Carnegie Library building which the library outgrew. The facade of the library has been preserved even with the addition of a contemporary expansion.

The parking lot is too small for RVs but RVs can be parked on the streets. Check the signs carefully because there are different zones. Cash or credit cards can be used at the parking kiosks. Parking is free on the weekends.  Museum  46.8723, -113.99242 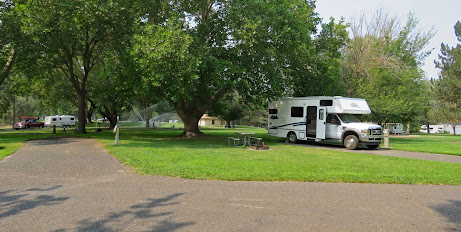 Many shade trees! Just what we were looking for on a very hot day on the dry side of Washington’s Cascade mountain range. This is a Corp of Engineers park situated on the bank of the Snake River and like most COE parks it’s well designed with roomy sites and level parking pads.

We wanted the most shade so we didn’t take an accessible site. Most of the sites are usable with paved parking pads, tables with extended tops, and hard packed ground. 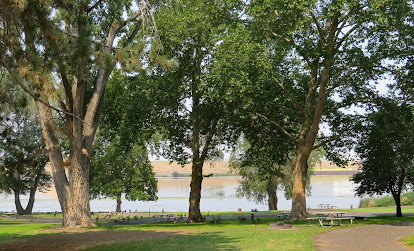