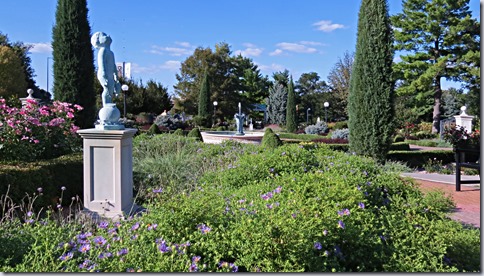 These three, small gardens are located very close to each other so it’s easy to view all of them in an hour or so. The zoo parking lot at Antelope Park is a good place to park but it may fill when the zoo is busy.

Both the Rose Garden and the Strolling Garden can be easily accessed from the zoo lot. Butterflies were very active when we visited. There are at least seven butterflies and a bumble bee in this photo! 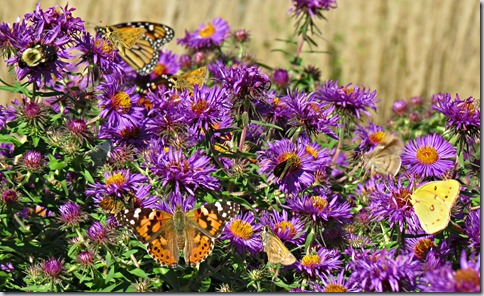 Both gardens are accessible.

The Sunken Garden is located on the opposite side of 27th Street from the Rose Garden. There’s an accessible crosswalk without a light or you can cross at the corner with a light. The Sunken Garden has two levels. The lower level has hard surfaced walkways. The upper level are crushed stone so wheelchair users may need to have help.

The museum is in the middle of a large renovation so one of the floors was not opened when we visited. The first floor has changing exhibits. The second floor exhibits feature artifacts with detailed stories of their place in Nebraska’s history. There isn’t a comprehensive exhibit covering the major events in Nebraska’s history but hopefully that will be included in the unfinished section of the museum.

Parking around the museum is very limited but there’s plenty of 2 hour metered parking on both sides of O Street a few blocks to the east of the museum.  The sidewalks and curb cuts are in very good condition. 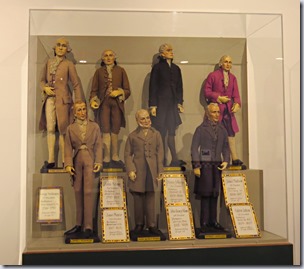 A 300’ arch spans Interstate 80 and houses a museum and a gift shop. Museum visitors are provided headphones for a fast paced audio tour which features life size dioramas of scenes from the Mormon, Oregon, and California Trails. Over 100 years of travel along the route is portrayed from wagon trails to the interstate. 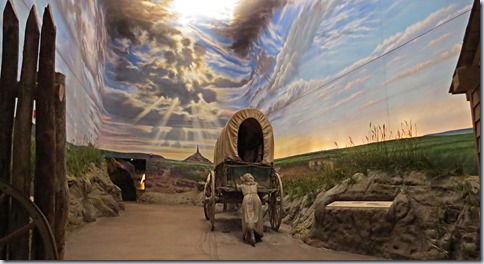 The scenes have their own audio effects which are loud and distract from the headphone audio. The noise can be overwhelming. Each scene has additional written information and the audio repeats when you stay in one spot so you can take as much time as you like to see the museum. 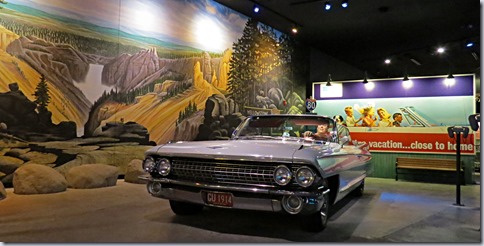 After visiting the museum take a walk around the grounds. A pedestrian bridge crosses a small lake and accesses paved walking trails. Interpretive signs, a sod house, and a Native American earth lodge are located along the trail. 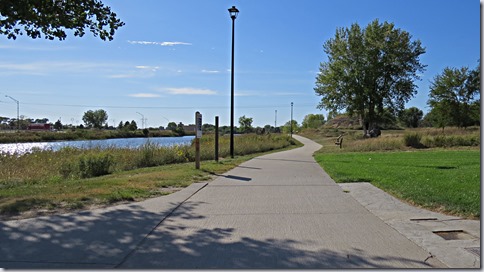 The museum is accessible. The arch actually has a slight arch so the pathway has an uphill and then a downhill grade. The paved trails are accessible.  Rough paths with loose gravel provide the only access to the houses.

Long truck/RV spaces are available. RVers and truck drivers may stay overnight but it’s pretty noisy because of the location next to the interstate.
Arch    40.67049, -99.03937

Did you ever wonder how every car on a train manages to get to the correct destination? Union Pacific's Bailey Yard, along with many other railroad classification yards around the country, makes it happen. Bailey Yard is the world largest rail yard with an average of 139 trains and over 14,000 railroad cars passing through every day. When a train enters the yard, cars that need to be sorted are separated and sent down a fanned network of tracks to wait for an engine heading the right way. About 3,000 cars are sorted a day. 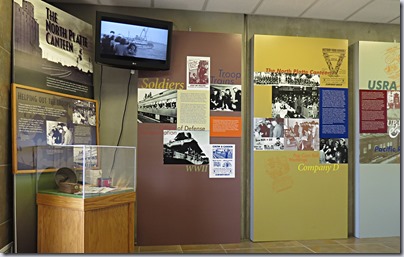 The tower and the viewing decks are accessible.

A large gravel lot is available for RV parking. The tower is a Harvest Hosts site so members may stay overnight. 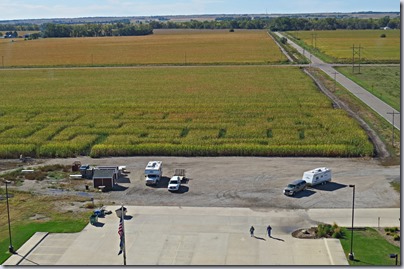 Three campsites with power pedestals and water hook ups are located in a large gravel lot across from a pretty, little city park. The campsites are free for two days and $10.00 for additional days. The park has a picnic shelter with tables, tennis courts, and a pool.
Park  41.76212, -103.32193

Scotts Bluff rises almost straight up from the surrounding land and is a remnant of high plains that were eroded away by wind and water over millions of years. A cap of hard limestone protected the bluff.  It was an important landmark for the travelers along the Oregon Trail. After weeks of walking along the featureless plains they were now 1/3 of the way to Oregon and were nearing the foothills of the mountain ranges.

During the 1930s young men working for the Civilian Conservation Corps built a road, from the visitor center to the top of the bluff, which is still in use today. Two short paved trails at the summit lead to overlooks of the valley. There are also three paved trails that start at the visitor center. One, which goes to the top of the bluff, is closed due to a landslide. Another goes to a section of the Oregon Trail wagon ruts. The last connects to another trail, the Monument Valley Pathway, for six miles total length. 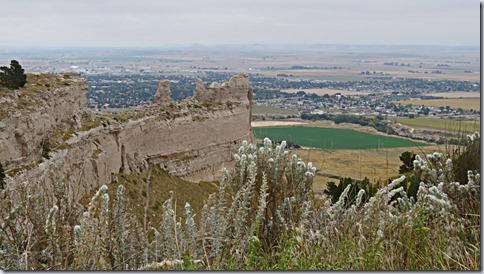 The visitor center has exhibits and two short films. 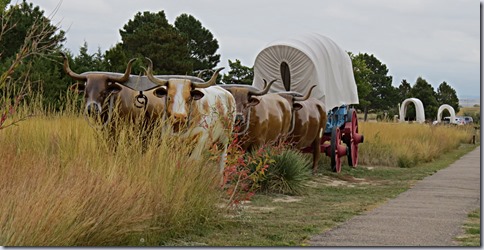 The parking lot has long RVs spaces. The road to the summit is limited to vehicles under 25’. An accessible shuttle bus is available.

Watch for another landmark, Chimney Rock, about 20 miles east of Scotts Bluff.

Fort Laramie got it’s in start in 1834 as a fur trading post, dealing mainly in buffalo hides that the Indians brought to trade for manufactured goods. In 1849, as travelers along the Oregon Trail increased, the post was bought by the US Army who used it until 1890. The emigrants along the trail eagerly awaited their arrival at the fort because it gave them a chance to buy supplies and the pastures had plenty of room for their draft animals to graze and rest.

The site consists of a visitor center, 11 restored buildings, 9 ruins or foundations, and walking paths with interpretive signs. All of the buildings and ruins on the grounds are from the time the Army occupied the fort. 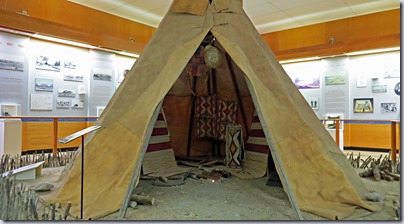 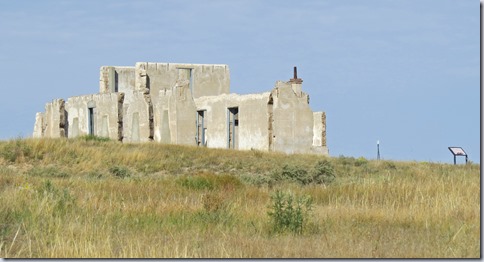 A paved path leads from the parking lot to the visitor center. The center is accessible but the entry door is very heavy. The walking paths are either gravel surfaced or across the grass so pushing is difficult. Several of the buildings have ramps at the rear entrances but do not have hard surfaced paths to access them. The rooms are partitioned off at the doorways with plexiglass so it may be hard to see the contents due to glare. 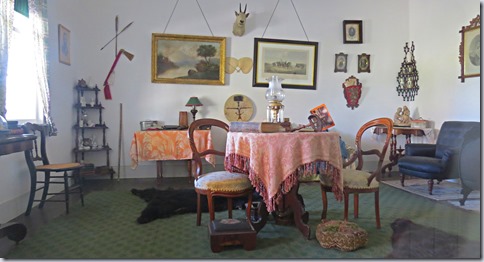 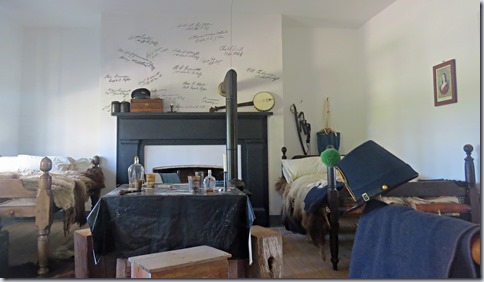 We spent the night in the little city park in the town of Fort Laramie. It’s a nice park with picnic tables, restrooms, water and a dumpster but very close to the train tracks and a crossing.

Oregon Trail wagons, Mormons on their way to Utah, 49ers on route to California, and Pony Express riders all had to cross the Platte River near the Interpretive Center. These groups of travelers had been following the same trails since starting from the cities of Independence and St. Joseph in Missouri but now as they left the river each group would soon strike out on different routes.

The interpretive center has very good exhibits with information about all of the groups of travelers with an emphasis on the trails through Wyoming.

The museum is accessible but some of the hands-on exhibits are not. The simulated river crossing wagon has a slight lip at the entrance. 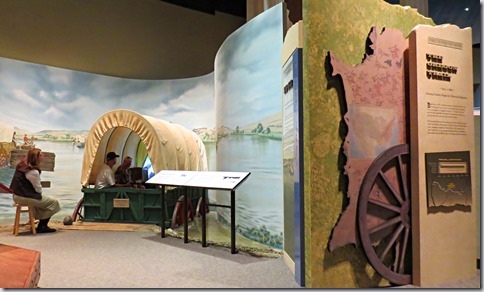 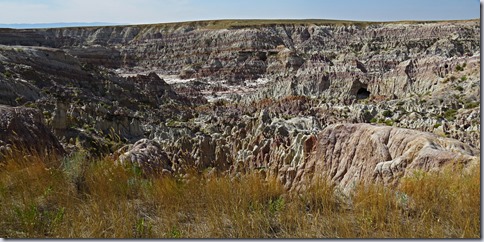 We stopped here in 1993 on our way to Yellowstone when we started fulltiming. A picnic area, gift shop, restaurant and deck overlooking the ravine, which has been carved out by water and wind, made it a nice place to take a break. The gift shop and restaurant are long gone, leaving a dusty, pot holed parking area, locked picnic grounds and a view blocked by chain link fencing. A quick stop is sufficient. 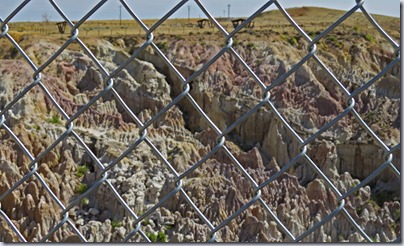 Thermopolis is a mini Yellowstone with a hot spring that pumps out more than 8,000 gallons of water a day which eventually flows over terraces and into the Bighorn River. A square mile of the town is state park - an unusual state park because it encompasses hotels, a hospital, and waterparks. The park is free to visit and features paved walking trails, boardwalks, and flower gardens. There’s even a free state bath house with a pool of 104 degree water. 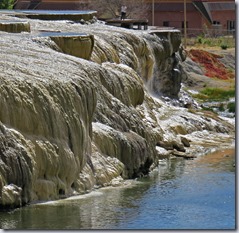 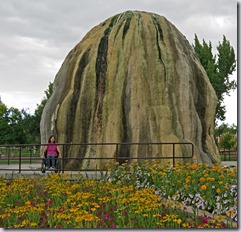 The trails and boardwalks are accessible. We didn’t visit the bath house but it’s supposed to be accessible.