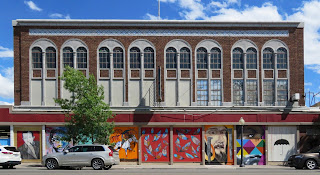 Over 50 murals add color to the main streets and alleys of Elko, Nevada. I couldn’t find a comprehensive map but this one is pretty good. Most of the murals are on Idaho Street and south of Idaho on 4th and 5th Streets. Peek down the alleys to see more. 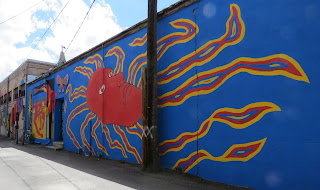 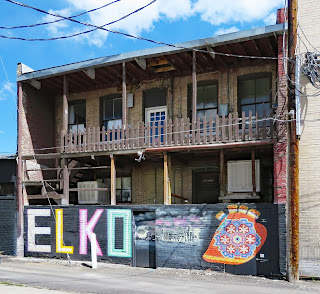 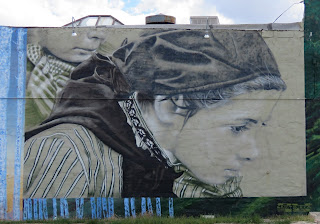 The sidewalks and curb cuts are in good condition for the most part. Almost all of the murals can be seen without leaving your vehicle.

Our $500,000 view! Anywhere else it would be a million dollar view but housing costs are low in Elko. :-D

Our camping site is on checkerboard BLM land. In this area the 1 mile squares join together and form a patch roughly 4 miles by 4 miles. It’s all ridges and gullies so there aren’t a lot of places to camp. The road to this spot is short and in good condition. The other roads are much rougher so walk them first especially if you have a low profile vehicle. BLM  40.84808, -115.84606 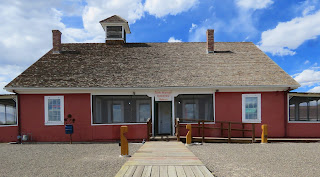 The museum building, constructed with railroad ties in the 1920s, was used on the W.T. Jenkins 25 Ranch as a cookhouse and later as a bunkhouse. It was moved to the current location in 2000 and, after 12 years of renovations, was opened in 2012 as a museum and historical library.

The museum consists of a large room with smaller ones on either side. Most displays are located on the second floor. Mining and farming equipment is displayed on the grounds along with a restored cook wagon. Like many small, community museums, the displays of donated items are lacking historical context. 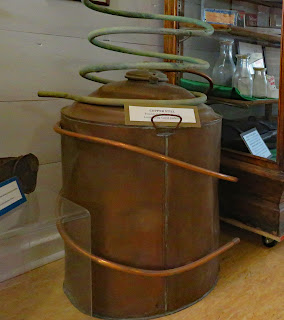 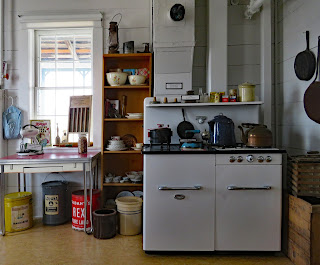 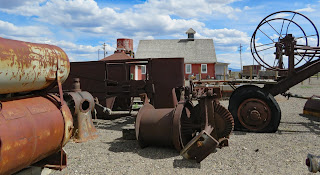 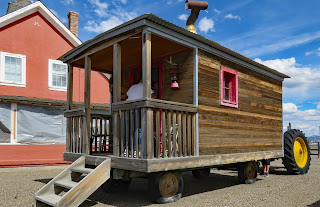 A ramp accesses the entrance door but several feet of loose gravel must be navigated first. The parking lot and outdoor display areas are also covered with loose gravel which is difficult to push through. The second floor is only accessible by a flight of stairs however a book of photographs of the displays is available. 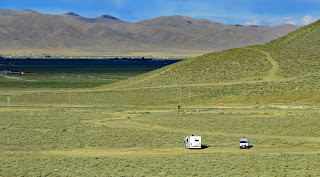 The dirt roads that crisscross this area of checkerboard BLM land are used by mountain bikers, horse riders and ATV users.  A large gravel lot with an informative sign provides plenty of room for any size RV. We drove along the main dirt road to a dusty pull off to get farther away from the Route 305 and spent a peaceful night. 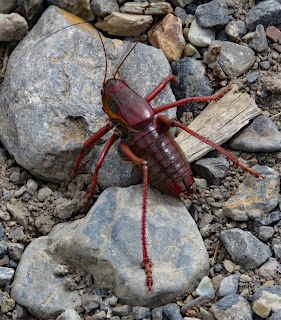 Tiny Mill Creek runs through a valley and creates a green corridor of large cottonwood trees. Unfortunately, a fire in 2017 destroyed many of the trees, leaving the westernmost section of the campground a little barren. The eastern section has good-sized trees that have been damaged but still provide beauty and shade.  The sites are roomy and have trash cans, tables, grills, and fire pits. 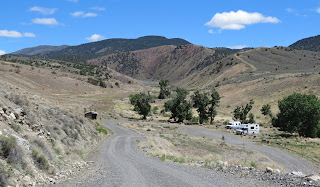 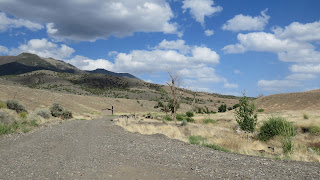 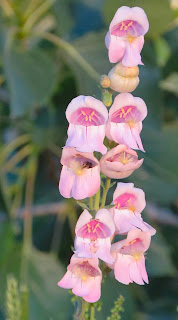 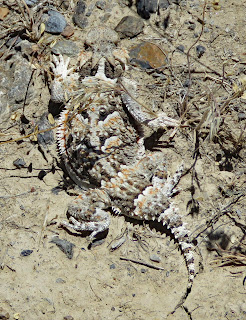 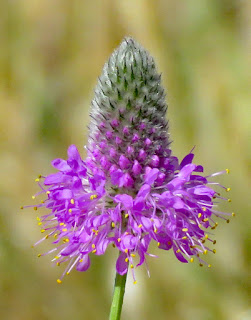 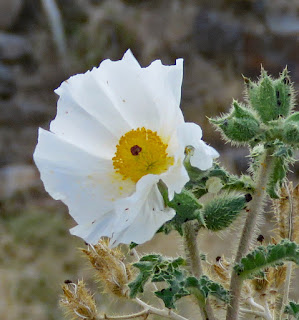 The ground is hard-packed so rolling is fairly easy. The tables have extended tops. The vault toilets were closed due to coronavirus when we visited so I don’t know if they’re accessible.

We moved out of the valley and camped along the rim for a few days to get better internet reception. This is a checkerboard of BLM and private land so make sure that you’re camped on public land. Campground  40.35655, -116.99492

After weeks of boondocking in the countryside, we needed to resupply so we made a quick trip to Fallon. A heatwave sent us rushing back to the mountains after an overnight stay at the fairgrounds.

We do not recommend this campground for several reasons. US 95 has a lot of truck traffic so it’s noisy day and night. On Wednesdays, irrigation water floods the campground leaving large puddles. The campground may be closed to casual camping during events.

Information and rules are posted on a large signboard. The fees are reasonable – $15.00 for sites with water and electric, $7.00 for dry camping. The dump station is an extra $5.00. Everything is self-service. The dry camping area is not marked so we parked on the grass south of the electric sites. Campground  39.45859, -118.78259 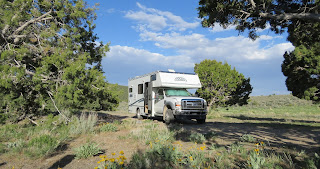 We had planned on camping at Bob Scott Campground but it wasn’t opened for the season so we unhooked the barbwire cattle gate at the beginning of FR 43234 and found a beautiful boondocking spot – trees for shade, a flower dotted meadow, views of rolling hills, bird song, roads to explore, and glowing orange sunsets. 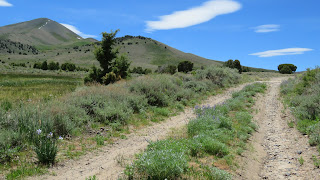 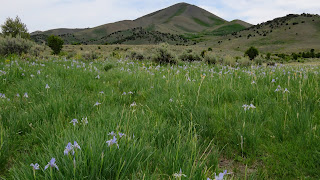 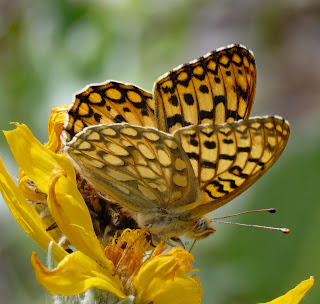 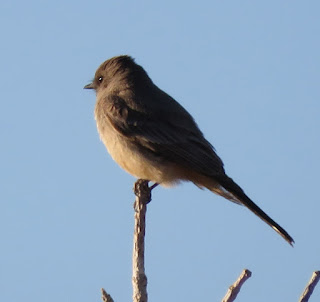 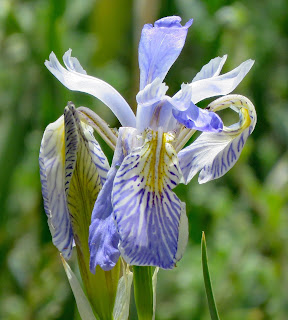 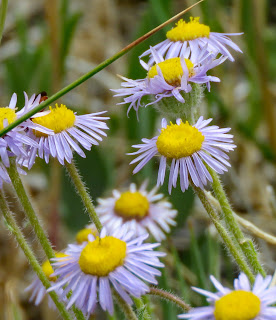 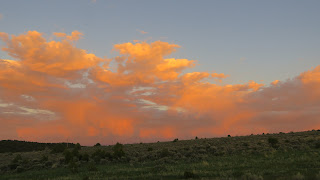 This spot is only about 1000’ off of US 50 but it’s far enough away that the traffic noise is not bad. It’s fairly level and large enough for several RVs. There another spot closer to US 50 that’s not as nice but would be fine in a pinch. Continue on FR 43234 for about 1500’, go through the next cattle gate, and follow the road to the right for a spot nestled in the trees. Don’t forget to close the cattle gates. We saw many old cow plops but there weren’t any cattle grazing during our stay. Forest 39.45484, -116.99929

The sagebrush has been cleared from this wide valley leaving grass as shared pasture for both cattle and elk. The elk migrate down from the mountains in fall and spring seasons but since we were a little late in the season we didn’t see any elk.

The viewing area is a large gravel lot with picnic shelter, grills, vault toilets, and interpretive signs. I didn’t check the toilets for accessibility but the rest of the site is accessible. 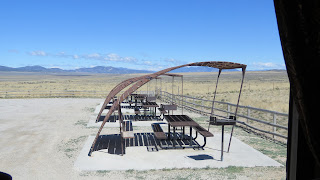