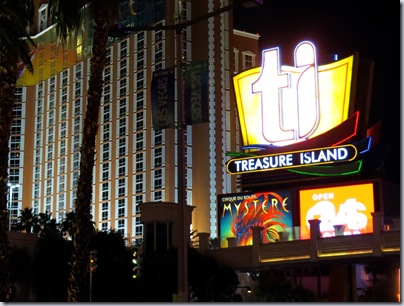 Mystere, the original Cirque du Soliel show, has been performing at the Treasure Island Casino since 1993. Since we’ve never seen a Cirque du Soliel show this one seemed to be the best choice from the eight  possibilities. We weren’t disappointed! The show is an amazing display of acrobatics and strength with a bit of comedy between set changes.

We’ve found that it’s easier to go directly to the show box office to buy tickets for wheelchair accessible seating rather than trying to figure out ticketing and pricing on the internet.  Wheelchair seating is often limited to one area of the theater which means that no matter what ticket price level you chose you will be seated in the only available seating. This is exactly what happened at Mystere. We bought the least expensive seats but were seated in the most expensive section - the worst seats in the best section but still very good seats - eight rows from the stage and bit off center.
Mystere      36.124601, -115.170713

Email ThisBlogThis!Share to TwitterShare to FacebookShare to Pinterest
Labels: NEVADA

We’ve been seeking out the lesser known and little visited sights in Las Vegas. This one was a very pleasant surprise. It’s on the second floor of the Neonopolis mall which is tucked into a corner at the east end of the Fremont Street Experience and is easy to overlook. The museum features changing exhibits of contemporay art. The current exhibit has a wide variety of styles and mediums - beautiful and interesting work but since photography is not permitted all I could get is a photo of the exterior. 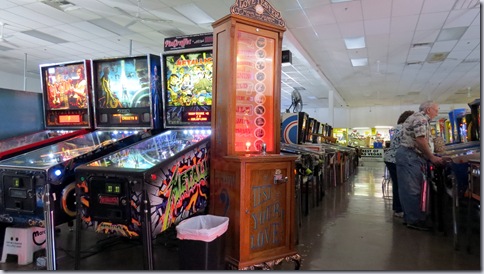 Tim Arnold, who operated a game arcade in Michigan in the 1970s and 80s, is the sole owner of this collection of over 200 pinball and arcade games. A few go back to the 1950s but most are from the 60s, 70s and 80s. All of the games work and cost between $.25 to $1.00 per play. This is a non-profit operation with all money after expenses donated to the Salvation Army. 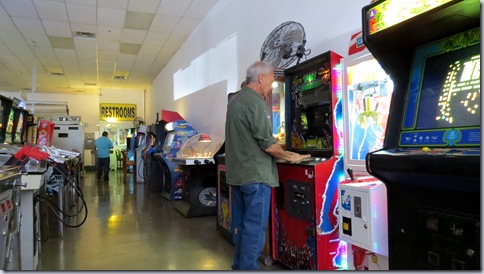 The arcade is accessible. They have a fun wheelchair parking symbol painted in the parking spot. :-) 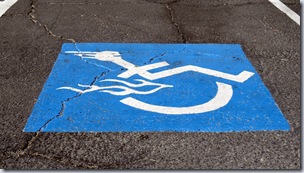 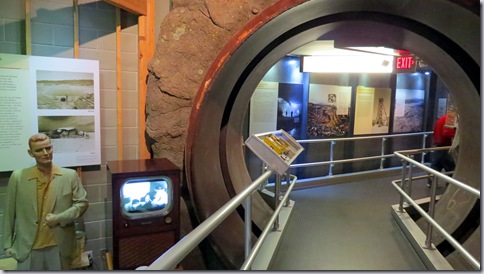 After WWII a 1,360 square mile section of lightly populated Nevada desert was chosen as a safe spot to test nuclear bombs. 100 bombs were detonated with experiments to see how buildings, vehicles and people represented by mannequins would survive a blast. After fallout from the tests was discovered as far away as New York bomb testing went underground.  828 more were detonated until 1992 when all testing was stopped. The area is now used to store nuclear waste and for terrorism training exercises. 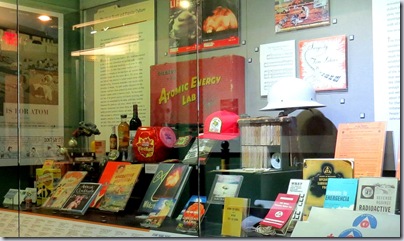 The museum has good exhibits, interesting old films including ones made during the tests, and lots of artifacts. A temporary exhibit about Area 51 lacks any real information and is very poorly constructed.

The museum is accessible however sloped hallways between main exhibit areas make viewing some exhibits awkward. Some of the video screens are hard to see from a seated position. 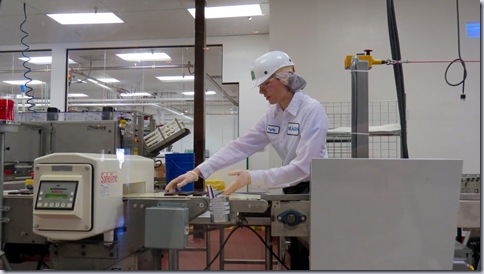 Forrest E. Mars retired from the family chocolate candy business in 1973 and moved to Nevada. He found retirement boring and built this factory which uses his mother’s recipes to create freshly made, small-batch premium chocolates. They’re very good and very expensive!

The factory is small so the tour consists of a short walk along a corridor overlooking the factory floor with video programs to explain the process. Try to visit on a weekday when production is occurring.  And of course the corridor leads directly to the gift shop and a free sample. There’s also a nicely landscaped cactus garden  to stroll through. 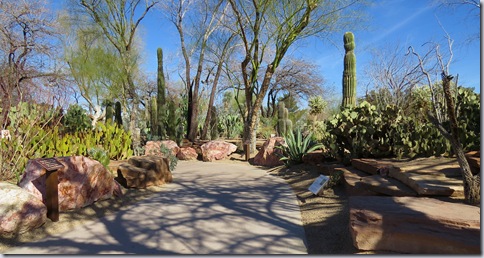 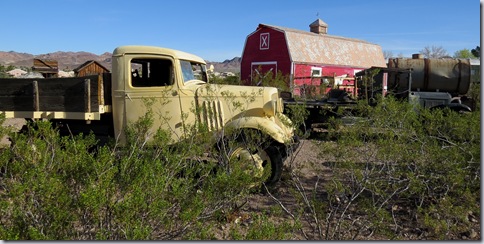 This is a wonderful county museum with a lot of different things to see. The exhibits in the Anna Robert Parks Hall give an overview of the human and natural history of the area. The exhibits outside include a ghost town, a railroad depot with train cars, a group of historic buildings furnished to depict different decades and lifestyles, a wedding chapel, a nature trail, and an outdoor classroom area with a trail. The admission price is only $2.00. 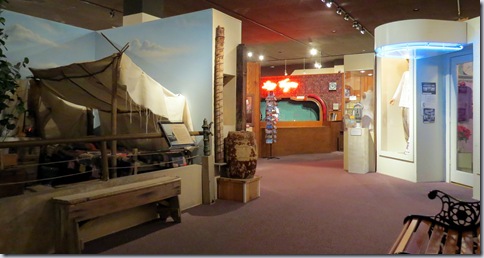 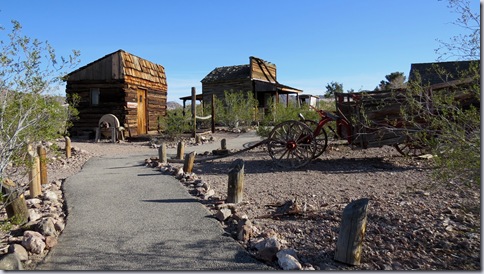 Cottonwood Cove Campground has two camping areas – a large one above the lake shore (pictured above) and a smaller one close to the lake (pictured below). Both have back in spaces only. The spaces are fairly small but some will accommodate a 35’ RV. The terrain slopes towards the lake and none of the sites are completely level. Amenities include restrooms, a dump station and paved parking pads. 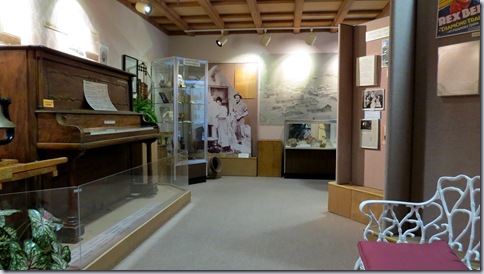 Searchlight, Nevada’s gold boom lasted from 1907 to 1910. Besides the $7 million in gold pulled from the hills Searchlight is also known for it’s famous citizens which includes Senator Harry Reid and Hollywood costume designer Edith Head. This very tiny but nicely done museum covers the history of the town and the lives of it’s noted personalities.

This is a fairly small museum with about 80 cars on display. Some are consignments and are for sale. The museum has two sections. One is directly across from the main casino entrance. The other is on the third floor. Finding them is a little confusing but look for signs pointing the way. 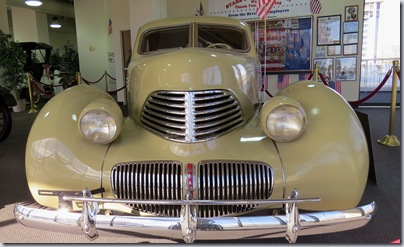 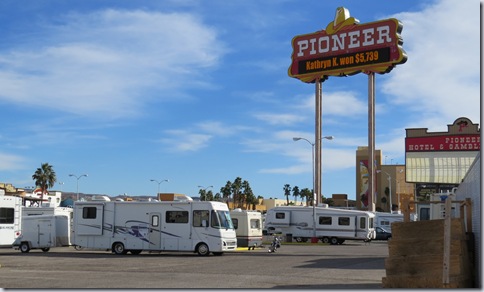 Laughlin, Nevada is a mini Las Vegas, minus most of the glitz but very popular with retired snowbirds. There are nine casinos along 1.5 miles of Casino Drive. Don Laughlin's Riverside Resort  has a campground and also allows dry camping in a paved lot (there may be a fee). Some of the other casinos allow overnight RV parking too. Some charge a small fee and some are free. We stayed at the Pioneer Casino which has a large, level section of their lot clearly marked for RV parking. A free permit is issued if you check in at the casino.

Since the casinos are close together and the terrain is flat walking and rolling around town is fairly easy.  The sidewalks along the road are in good condition and there’s also a walk along the river but it has some steep parts.  Casino
35.15667, -114.5743 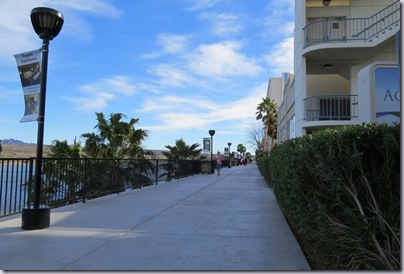 Avi Casino has a KOA RV park but they also allow overnight parking in a large sandy lot. The lot can be pretty crowded in the winter months probably due to a casual attitude about the length of stay – “ Length of stay while not set can be limited at management’s discretion”  No check in is required. 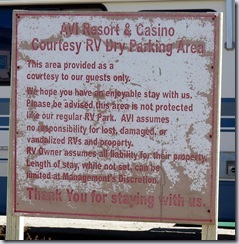 Follow the painted walkway through the hotel wing to the casino entrance. Loose sand in the lot makes rolling difficult.

Oxbow Campground is one of four BLM campgrounds - Squaw Lake, Oxbow, Senator Wash North and South Shores and Ehrenberg Sandbowl – that are included in a special $75.00 annual permit. The fee without a permit is $15.00 a day. Camping is limited to not more than 14 days within any period of 28 consecutive days. When the limit has been reached campers are required to move to a different campground at least 25 miles away.

Oxbow is fairly small with campsites lining the bank of an old bend of the Colorado River which has been straightened and contained by a levee. A boat ramp on the oxbow allows access to the river. The campsites are fairly close together with no vegetation for privacy. A few sites are large enough for any RV. Amenities include tables, fire rings, grills, vault toilets and a dumpster.

None of the sites are marked as accessible but most are usable. The ground is fairly hard packed. The vault toilets are accessible. Campground
33.38744, -114.71166

Much of the desert land in southern Arizona and California is administered by the Bureau of Land Management. The largest areas of BLM land are located in the western states and are managed similar to national forest land with leases given to individuals and companies who use the natural resources while leaving the land opened for recreational purposes. Although most of the land is undeveloped and available for free dispersed camping (limited to 14 days at one location) the BLM also manages a number of  primitive campgrounds. Large sections of BLM land around Yuma and Quartzsite have stricter rules but longer camping limits due to the extreme popularity of the area with snowbirders. A permit, which costs $180.00 for 8 months or $40.00 for 2 weeks, is required to camp in any of the 7 Long Term Visitor Areas.

Squaw Lake is located very near the Imperial Dam LTVA but is managed separately. A fee of $75.00 a year or $15.00 a day is charged and a pass holder is allowed to camp at four different areas – Squaw Lake, Oxbow, Senator Wash North and South Shores and Ehrenberg Sandbowl, an ORV site. Squaw Lake has more amenities than normal including tables, grills, fire pits, flush toilets and $1.00 showers. Free fresh water and a dump station are provided 1.5 miles away at the Imperial Dam LTVA. The area is very pretty but the RV section of the campground is just two large paved lots. Tenters get much nicer sites right on the water however most of them require a long walk from the parking area. We wanted a paved site to make waxing and minor maintenance work easier so this parking lot campground worked out fine. Each site consists of two parking spaces. We were concerned about generator noise when we saw all of the large class As and fifth wheels and a lack of solar panels but most people were very considerate and ran their generators for limited amounts of time. This may be much different in the summer months.

Two sites are marked as accessible but they do not have a paved path to the restrooms and showers. It’s much better to camp in the first parking lot and travel through the day use lot to get to a paved path to the building. The restrooms and showers are accessible but a token is needed for the showers and there isn’t a path from the showers to the token machine.  Campground
32.90322, -114.47756 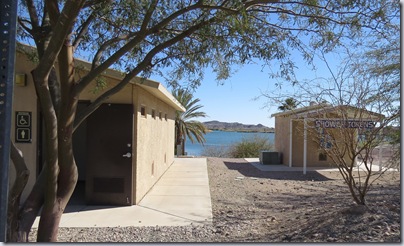