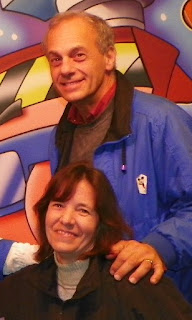 We've been fulltiming since 1993. Traveling in an RV became a long term goal of ours after we spent a year on the road in 1976 with our 4 year old daughter.  We settled down and got to work saving money. Both of us had jobs and we also bought houses and apartment buildings which we remodeled, rented and eventually sold. It was a lot of work for a modest profit not at all like the infomercials on TV portray it! :D  In the spring of 1993, our daughter was in college, we put our house up for sale and loaded the RV. On the road at last! We were young, I was 39 and Tony was 42, so we didn't have any income such as pensions or social security checks. Our savings would not last  until social security kicked in so our plan was to workcamp, volunteer, and pick up jobs whenever we felt the need. I had my journeyman electrician license and Tony had a class C driver's license so we were pretty confident that we wouldn't have a problem getting short term work.

Then in Oct. of 1993 I was in an accident which damaged my spinal cord and I am now in a wheelchair permanently. After about eight month of hospitals and rehab centers we were ready to get back to our lives. Our new accessible motorhome was finished in Oct. 1994. We got back on the road!