Immigrants following the California Trail traveled along the Humboldt River through Utah and Nevada. At Carlin Canyon the river carved through a small mountain and made a horseshoe loop. This is the path that the Bartleson–Bidwell Party, the first wagon train along the California Trail, used. It’s also the path of the ill-fated Donner Party. In 1869 the transcontinental railroad ran through the canyon. After train tunnels were blasted into the mountain in 1903 the rail bed became a highway. Addition tunnels were blasted for I-80 in 1975 and the loop was closed to through traffic.

This is BLM land so it’s open to dispersed camping. Because of the steep hill on one side and the river on the other there aren’t a lot of places to camp. A large pull off near the west end of the loop has an interpretive sign and would make a good camping spot but it’s close to the interstate and noisy. Continue to the east side of the loop where there’s another pull off and another sign. This spot is much quieter. Both pull offs are large enough for any RV. 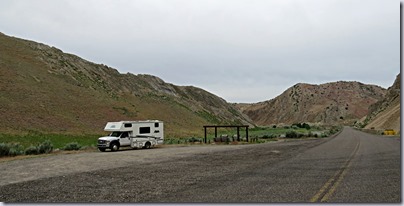