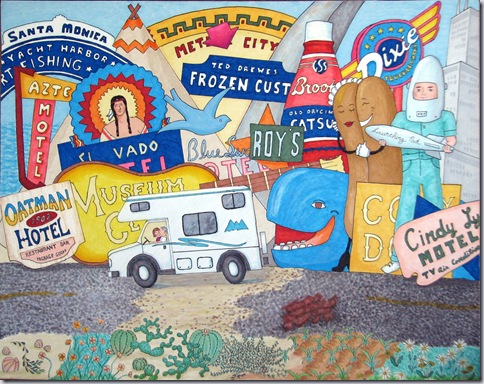 The Route 66 trip was a lot of fun... but we probably won’t do it again. I’m sure that we’ll drive certain sections of it in the future however staying on one path is much too restrictive for us. There’s always something interesting just a few miles east or west or north or south and there goes the whole plan! :-D

Distance - 2278 miles from Chicago to Santa Monica.  We were on the road for 80 days so we drove about 30 miles a day. These aren’t totally accurate figures. We drove extra miles because we backtracked and went off the route at times. There were days that we didn’t drive at all. But overall our mileage per day was short. We could have gone even slower and extended our trip by a couple of weeks or even a month and still have found plenty of stuff to occupy our time.

Following the Road – It really is possible to drive most of the way on the old road. It’s not always marked as Route 66 but it is still there. The EZ 66 Guide proved to be a valuable resource. At first glance it looks very confusing but once on the road it makes sense although driving alone without a navigator might still be difficult. We used the Guide most of the time but also consulted our US atlas at times. Our GPS was a help finding our way around in unfamiliar territory.

Time of Year and Weather – We chose to travel in the fall to avoid spring tornadoes, summer heat and winter snow. The temperatures were warmer than usual and we had wonderful, sunny days for most of the trip. We had one worrisome evening near Vega,Texas, listening to tornado warnings but the most we got were high winds and a few minutes of small ( but very noisy) hail. The coldest temperatures were around Gallup, NM where it when down to 11 degrees at night. Starting the trip in early September rather than late September would have been ideal. Some of the museums and other attractions were closed for the season by the time we reached them.

Parking for the Night – This wasn’t a problem anywhere on the route except in Chicago, Tulsa and Los Angeles. There are plenty of Walmarts in the mid-west states where RV parking is permitted and they’re not far off of the path of Route 66. Farther west we stayed in casinos and boondocked when possible. Established campgrounds are located close to Route 66 for travelers who prefer them.

The Cost – I didn’t keep track of our expenses however this is an inexpensive trip mostly due to the short distances traveled per day. Route 66 follows a populated and long used path so food, fuel, dump stations and places to park overnight are never far off of the route. Almost 100 museums are along the road. At least 30 are free and many have fees of less than $10.00. In addition to the museums about 40 free sites have interpretive signs, walking paths or some other item of interest. The small towns are great for just wandering around and seeing the sights.

Traveling by RV – Our RV is 25’ long, 8’ wide and 10’ 8” high so it’s on the small side. Some of the old sections of road in the mid west are very narrow so it’s important to slow down and use some care when passing oncoming traffic. Fortunately there’s very little traffic. We had no real problems driving along most of the road but low underpasses, weight limits and length limits will make driving on the interstate necessary at times if you have a large class A.

Highlights – Often the most memorable parts of a trip are the people who are met along the way. This trip was no exception. We really enjoyed talking with people at our stops. Almost everyone is friendly and ready to tell visitors about the things that make their community and their Route 66 connection special. An added bonus for us was the chance to spend time with a couple of old friends and to meet a couple of new friends.

Chicago was our favorite big city. Both St Louis and Tulsa are wonderful mid-sized cities to visit. Pontiac, Illinois, with three free museums and a mural walking tour, gets a gold star for the best Route 66 spirit in a small town. And as always we loved all of the folk art.

I’m going to work on the map a little bit more but since Route 66 is constantly changing with some places going out of business and other places opening I’m sure that it won’t be long before it’s out of date and has a lot of bad links.

Email ThisBlogThis!Share to TwitterShare to FacebookShare to Pinterest
Labels: ROUTE 66