Route 66 travelers must get onto the interstate to cross the Colorado River into California. A short dead end at exit 153 leads to this big concrete billboard and a view of the Old Trails Arch Bridge, formerly the path of National Old Trail Road and Route 66, now supporting a pipe line. The billboard’s original message welcomed travelers to Arizona

Needles got it start as a rail town and became a popular stop along Route 66. It still has some nice neon signs and Art Deco buildings 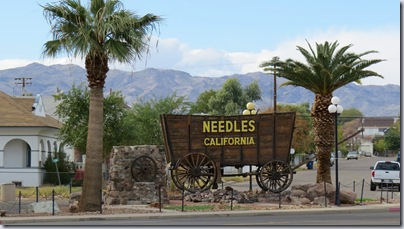 The Claypool and Co. was a department store selling groceries, hardware, clothing and a variety of other goods. The building is now used by Palo Verde College. 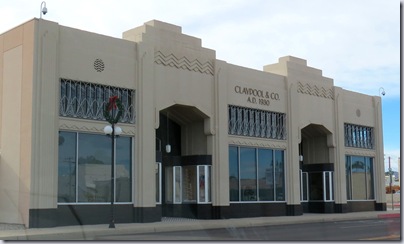 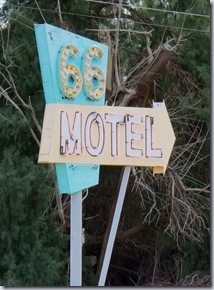 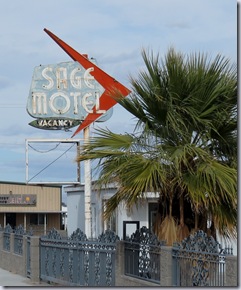 A fun mural featuring Snoopy’s brother Spike who lives in the desert near Needles.

Route 66 between Kingman and Ludlow travels through 110 lonely miles of the Mojave Desert. It crosses the interstate at Fenner where there’s a gas station but not much else.  Roy’s Cafe at Amboy has been restored but all of the other gas and food stops have been long abandoned. Do not take this route if you’re driving a large RV. There are many old timber bridges over the washes and they’re not strong enough for heavy vehicles. Weight restrictions – here.

Goffs is an old mining and rail town with a population of less than two dozen people. The 1914 mission style school house is a museum featuring local history. It was closed for the season when we passed by. 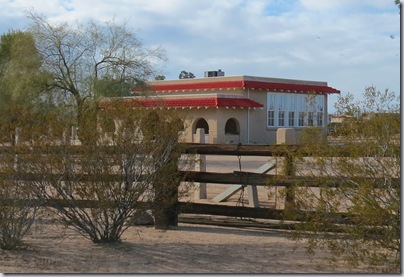 Essex is almost a ghost town. Even the post office is closed.

A really old billboard advertises rooms at the Flamingo in Laughlin, NV. 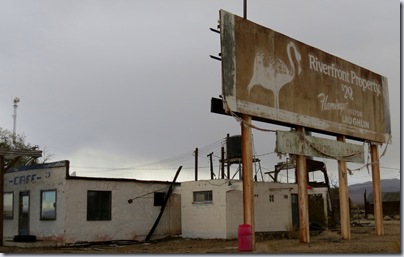 This original Route 66 rest area is very good spot to spend the night. It’s just a long roadside pull off with a few interpretive signs.

The ruins of a cafe, gas stations and cabins sit on the Cadiz Summit. 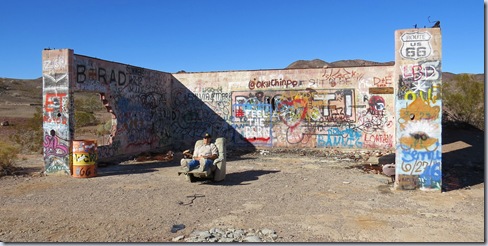 This huge sign marks the Roadrunner’s Retreat Cafe and Station. The Roadrunner was built in the 1960s and closed shortly after the road was bypassed in 1972. 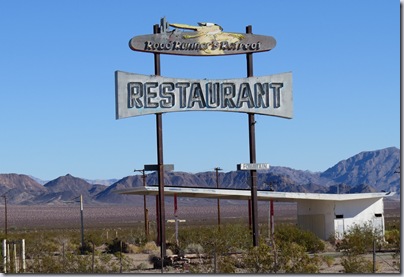 Roy’s Cafe has been featured in movies, music videos and a TV commercial.  It’s been restored by Albert Okura, the owner of the Jaun Pollo chicken chain. The little cabins house an art display which left us puzzled. 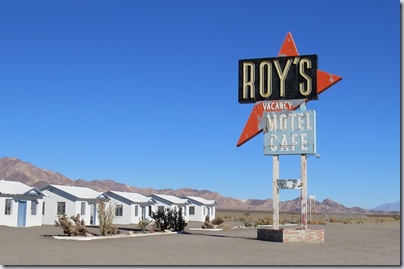 Amboy Crater is 250-foot-high and approximately 6,000 years old. The site includes a picnic area, vault toilets and a trail to the rim.

Ludlow, a former mining town, now has just a few inhabited houses, two gas stations, a small motel, a restaurant and a population of 10.