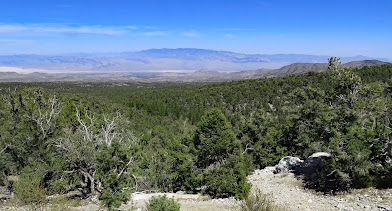 The overlook is located a few miles south of the intersection of Route 156 and Route 158, along the west side of the 41 mile scenic drive loop. Two large areas give unobstructed views of the Mohave Dessert and the Nevada Test Site which was used from 1951 to 1992 to test nuclear weapons. 921 of the 1,021 detonated were underground and left craters on the surface. We couldn’t see the craters but I think they would be visible with binoculars.

From 1951 to 1962 tests were conducted above ground. The mushroom clouds created could be seen in Las Vegas and tourists drove to the overlook for a better vantage point. The fall out skipped  the Las Vegas area but adversely affected people farther east in rural communities and St George, Utah where there was a spike in cancer cases for decades.

Informative signs about the Native America tribes, geology of the region, flora and fauna, and nuclear testing are located along the trail and at the two overlook areas. 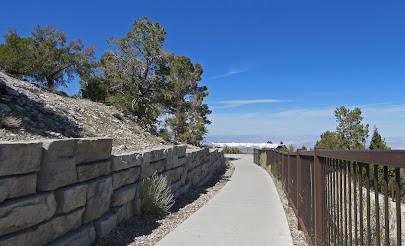 The trail is short, less than 1/2 mile round trip, and completely paved.  It’s ADA compliant but  it goes downhill the entire way so keep the push back up in mind. Signs at the first overlook area block the view for wheelchair users. The second overlook area has breaks in the line up of signs so everyone gets a good view. All of the signs are low enough to be easily read. 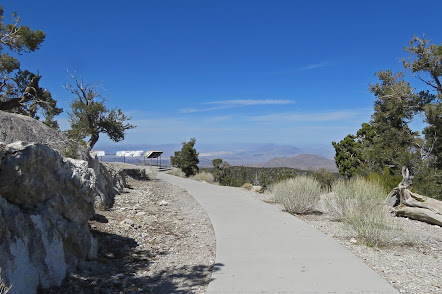 The overlook has several spots designated for buses and RVs. The loop road is steep but doable with any RV. Each leg of the horse shoe loop extends a few miles farther into the mountains where a ski area, a lodge, trailheads, campgrounds, and expensive vacation homes can be found. We took a quick trip along these roads but we didn’t check out the oversized parking situation. Overlook  36.33618, -115.62903 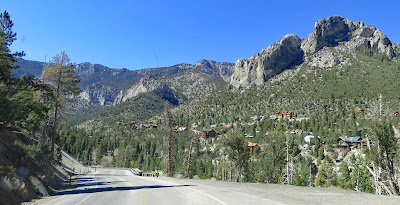