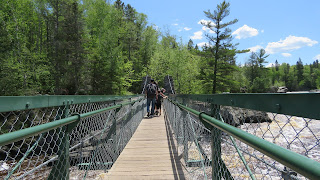 In 1934, young men working in the Civilian Conservation Corps built a swinging bridge across the St Louis River to replace a bridge of logs and rope built by the forest service but even this more substantial bridge with stone piers couldn't withstand the rampaging water during flooding.  It was swept away just a few years later and has been replaced many times, most recently in 2013 after it was destroyed by record flooding in 2012. The bridge provides access to miles of hiking trails with campsites for backpackers.

The CCC workers also built the rustic River Inn which is now an interpretive center. A paved trail from the center leads to the bridge. In addition, 70 miles of paved William Munger State Trail can be accessed from the River Inn and swinging bridge parking lot.

The interpretive center is accessible. The trail to the bridge has switchback to make the slope manageable. The bridge is accessible but it's narrow so two wheelchairs may not be able to pass each other. We did not go on the William Munger State Trail or visit the campground which is listed as having three accessible sites. 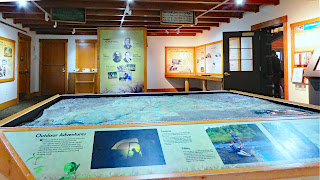 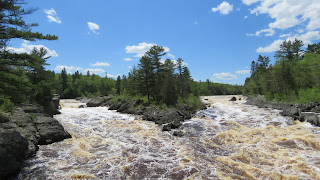