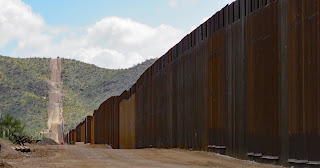 Our visit to Organ Pipe National Monument coincided with the construction of the new wall which is replacing vehicle barriers that were installed in 2005. At that time drug smugglers were using the dirt roads as remote access points to the US market. The barrier and additional border patrol agents stopped almost all of the drug traffic but migrants still use the monument to enter the US.

The vehicle barriers allowed flood waters and wildlife to easily pass between the countries. The new wall will cause problems with both flooding and animal migration. Building it is also disturbing a broad swath of land, plowing through a sacred burial site, wasting money that could go to more important projects, and will do little to stop migrants from crossing into the US. 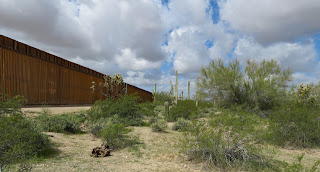 We were very surprised that we could walk right up to the finished section of the wall. We could have stepped into Mexico through one of the places where a gate will be installed. Getting back might have been tougher! The experience of seeing the wall close up was disturbing, considering that the main reason for building it is to keep very desperate people out of the US – people who are risking their lives by attempting to walk for miles in a hostile environment. Thousands have died crossing the Arizona desert. 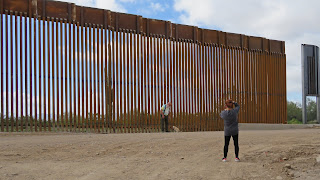 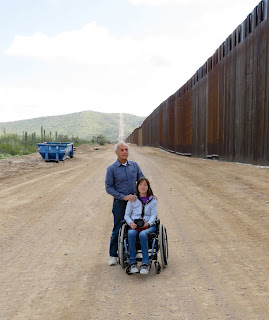 We couldn’t help but think of our relatives who came into the US at a time when immigrants were recruited to fill all of the menial jobs created by the industrial revolution. While they were not exactly welcomed by the US citizens they were deemed useful and given most of the rights of citizenship. It was so much easier for them than it is now and we reap all of the benefits because they decided that leaving their homeland and everything that they knew was worth the risk for a better life. We should be welcoming new migrants rather than making it so hard for them that they end up dying. Organ Pipe  31.95449, -112.80131