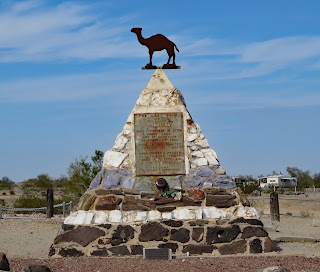 In the 1850s the US Army imported 70 camels to see how the animals would fare carrying supplies across the arid west. By all accounts, the project was a success but due to the start of the Civil War and objections by both the soldiers and the pack horses and mules the Camel Corp was disbanded in 1861. 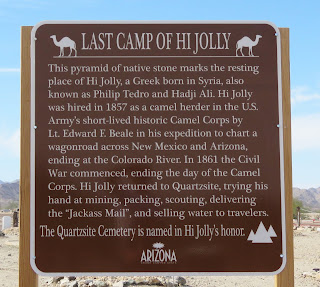 Eight men from Greece were employed as camel drivers. The lead driver Hadji Ali, who was nicknamed Hi Jolly by the soldiers, settled in Quartzsite Arizona after the Corp disbanded. He worked as a miner, mule packer, and scout for the army. In 1935 a stone pyramid was built at Hadji Ali’s gravesite in the local cemetery.

The monument can be viewed from your vehicle. The ground is surfaced with loose gravel so rolling is difficult.