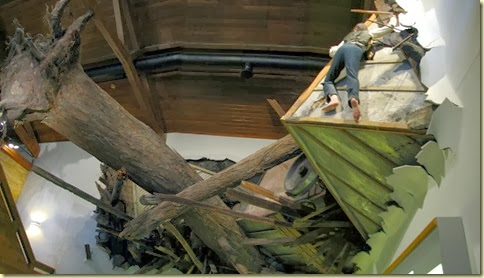 The visitor center sits on a hill above the ruins of the South Fork Dam which failed in 1889 killing more than 2,000 people living downstream in the small towns along the Little Conemaugh River and in the flats of the big steel city of Johnstown.  A good view of the wooded valley, which had been filled with water to form the lake where members of the exclusive South Fork Fishing and Hunting Club fished and boated, can be seen from the visitor center. The club bought the land in 1880 and after making inadequate repairs and modifications to an existing dam allowed the lake to fill to levels never reached in the past.

The club members also built a large clubhouse and a village of three story vacation houses on the far side of the lake, visible from the visitor center. Most of the vacation houses are gone and the area is now the small town of St. Michaels. After the flood the members abandoned their houses. None of them ever returned to the area. The National Park Service owns the clubhouse and three of the cottages. The clubhouse is being renovated and is opened for ranger led tours in the summer.
The visitor center is all accessible. The Unger farm house (opened during the summer season) is located near the visitor center. The first floor and basement are accessible. The path leading to the house is grassy gravel and a little rough. A paved path leads from a small parking lot to the north side edge of the dam ruins.