Until 1898, when gold mining dredges tore up the ground, the wildlife area was a riparian zone along the Feather River. The dredging lasted until 1952 leaving a wasteland of barren rock piles.  Construction of the Oroville Dam began in 1963 and a lot of the rocks were removed for fill. The wildlife area was partially restored with newly created ponds, lakes, and islands to provide habitat for fish and animals. Today there are large trees and grassy meadows but the scars are still very visible. 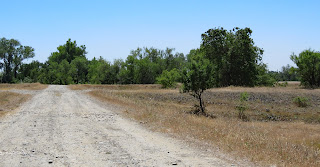 Old roads circle the wildlife area and are good for walking and bike riding however some are surfaced with rounded river rock and are almost as bumpy as cobblestone roads. The smoothest and most accessible is the northern most one right near the wildlife area entrance. There’s also access to the Brad Freeman Memorial Bike Trail across Larkin Road from the wildlife area entrance. The path to the trail is narrow and steep. Easier access can be found at the parking lot about 1.5 miles west on Larkin Road.  There isn’t any shade on the roads or the bike trail. 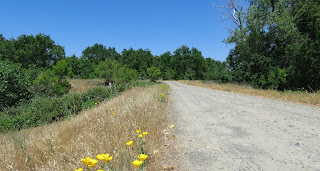 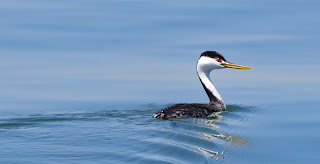 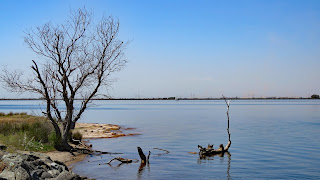 We’ve camped in some usual places but this is one of the strangest. The only place where camping is permitted is on top of four concrete slabs (possibly old building floors) where eight side by side spaces are marked out. There’s a vault toilet and a dumpster. North of the spaces is a large, ugly gravel lot. South of the spaces is the Feather River which is really pretty so we angled our RV to get a river view. The trees by the river are roosting spots for many bird species and evening and early morning are filled with bird song. Most of the other campers seemed to be locals and were using tents. We expected some late night partying but everything was quiet by 9 or 10. 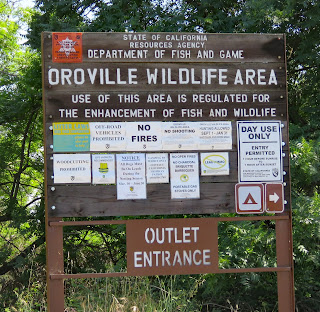 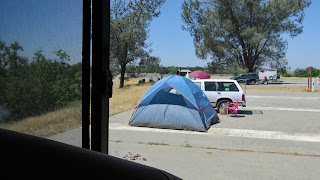 The area is patrolled by the California Highway Patrol. Even though camping is free a pass is required. The only place to get one is in Oroville so go there first. Vehicle registration, proof of insurance, and official IDs for everyone in the camping group are required. Camping is limited to 7 days at a time and 14 days total in a year. Wildlife Area  39.45681, -121.63397  California Highway Patrol