The first slaves in Pennsylvania were brought by the Dutch in the 1630s but after Pennsylvania became a British colony slavery was not a popular practice due to the beliefs of the Quaker, Methodist, and Baptist settlers. The Gradual Abolition Act, which passed in 1780, made children born to slaves free when they reached 28 years of age. By 1860 all African- Americans living in Philadelphia were free with many owning business and property. Philadelphia became an important stop on the underground railroad helping hundreds of runaway slaves escape to the north every year.

The museum has two permanent exhibits and an one changing exhibit. The permanent exhibits are interactive allowing visitors to pick subjects that interest them. One features a large mural, the other spotlights renown Philadelphians from the 18th century. The museum exhibits are small, there are no artifacts, and much of Philadelphia’s African-American history is not told. We did not pay because we have a pass but the admission price is too high for the limited scope of the museum. 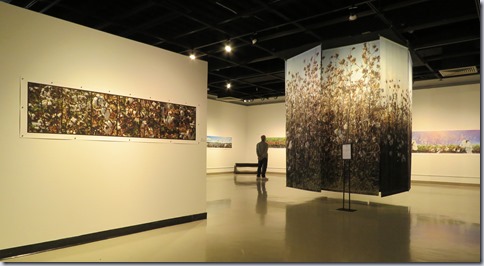 We parked along Dock Street which is about 1/2 - 3/4 of a mile from the historic district where all of the museums and landmarks are located. Dock Street is much wider than most of the other streets and we could always find an open parking space. The spaces are not marked so a ticket from the kiosk – payable by cash, credit card or phone app - is good for any size vehicle. Parking is limited to 3 hours however we were informed by a friendly local man that a disabled placard would get us an extra hour for free. This was confirmed later by a parking officer. Almost all of the sidewalks and curb cuts are in good condition and the terrain is fairly level.  Museum  39.95329, -75.15164