Still Camping in the Desert 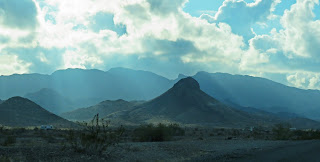 There are many spots to camp for free in southern Arizona and California which makes it easy to spend the winter where it’s sunny and warm. Most of our camping in this area is on BLM land and there are a few simple rules -  “Dispersed camping is allowed on public land for a period not to exceed 14 days within a 28 consecutive day period….After the 14th day of occupation, the camper must move outside of a 25 mile radius of the previous location.”  Since rules vary by location and state – A permit is needed for campfires in California and some areas require signing in with a host – checking  the rules for each area is a good idea.

We’ve been moving to a new spot every few days. Mostly they’ve been places where we’ve stayed in previous years however we recently camped at a new area – American Girl Mine BLM land in California. Gold has been mined here since the early 1800s and it’s believe to be the first mining district in California. The last large mining operation closed in the 1990s but a good number of ore haulers traveled back and forth along the road while we were camped so there is still some type of activity at the mines.

The dispersed camping area is very large level and mostly level. There’s enough room to satisfy people who want their own private spot and to accommodate large groups of friends camping together. The city of Yuma is less than 20 miles away and has a wide variety of stores and services. All of this plus easy access to the Mexican border town of Los Algodones makes American Girl Mine a popular place.