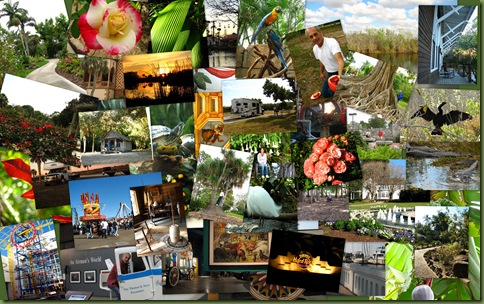 We had a wonderful time in Florida in 2011. We’ve been avoiding Florida for years because it’s just too crowded, too expensive, and we thought that it wouldn’t fit with our usual way of traveling without set plans or reservations. We originally thought that we would spend about a month and leave when the snowbirds started coming in full force after New Years.We ended up staying for almost three months then returned the next winter (2012) and stayed again for a of couple months.

The biggest problem, which we discovered in precious visits, is campgrounds. The well known state and county parks are booked up through the winter months but we found some hidden treasures. There are county parks that few people seem to know about that are beautiful. The key to finding open campsites is to look for campgrounds that don’t take reservations, are a little out of the way or don’t have sewer hook ups.  When we couldn’t find a campground we fell back on “blacktop camping” which is hard in Florida because so many cities have restricted it but we did find some Walmarts, Cracker Barrels, and casinos where it was okay to stay for the night. Finding campgrounds and overnighting spots becomes more difficult the farther south you travel.

Everything is Florida is expensive, even museums, sometimes two or three times more expensive than other states but with our passes we were able to see many different things and spend very little money. Passes are always economical for us because we use them for the whole year as we travel to other states but you’ll have to decide which attractions you’re interested in to see if it makes sense for you to buy them.

One thing that surprised us was the good accessibility of most places – easy to open doors, ramps, and good pavement.  Even where there wasn’t pavement the hard packed sand or crushed shell made rolling pretty easy. This may have been helped along by the lack of rain so it might not be as good at other times of the year.
at 7:22 PM

Email ThisBlogThis!Share to TwitterShare to FacebookShare to Pinterest
Labels: FLORIDA